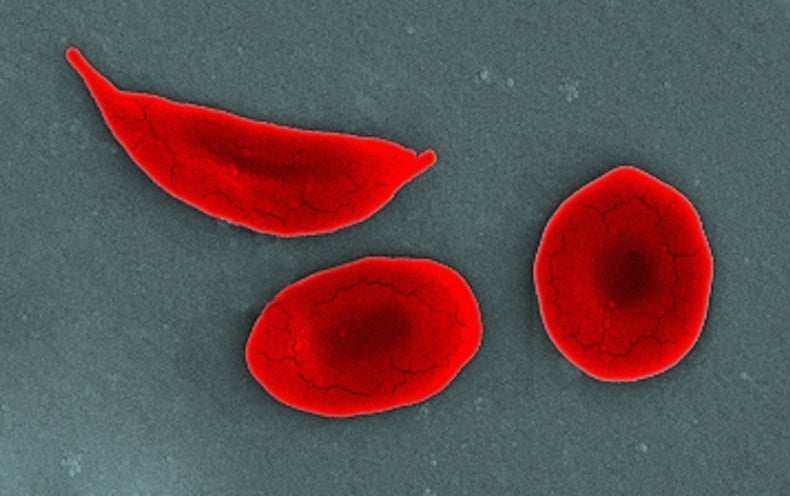 For as long as he could remember, Razel Colón had known pain. It ripped down his neck and back, shot through his legs and traveled on to his feet, often leaving him writhing and incapacitated. He suffered occasional attacks of “acute chest,” in which breathing suddenly becomes difficult. “It felt like an elephant was sitting on my chest, with tight, tight pain,” Colón tells me. Trips to the emergency department and the hospital were commonplace. “If I was lucky,” he says, “I could stay away for a month.”

Colón, from Hoboken, N.J., is just 19, but the sickle cell disease that produced these effects had been a constant, if unwelcome, companion. But he tells his story now from the perspective of one who has gone a year and a half without that pain. He can do things that previously were out of the question: play basketball, lift weights, swim in cold water. His treatment, says his long-time physician Stacey Rifkin-Zenenberg, a pediatric hematologist-oncologist at Hackensack University Medical Center, “changed him from having the disease to being a carrier.”

Colón’s case represents a point on the curve of an emerging technology that may forever alter our approach to treating diseases like sickle cell. That world, the cutting-edge world of innovative genomic therapies, is once again in the midst of explosive change—and designer DNA lies at the heart of the conversation.

This is daring new territory. Some strategies, such as gene therapy, have been available for some time, including the ability to genetically modify cells in order to produce a therapeutic effect—that is, to add a corrected gene into the genome in order to try to treat disease. Traditionally, viruses have been used to deliver healthy genes into cells, but the past decade has been witness to profound change. Multiple gene therapies have been approved to treat a variety of conditions: squamous cell skin cancer, a rare form of inherited blindness, melanoma, blood disorders and so on.

It was this type of treatment, as part of the largest lentivirus ongoing gene therapy trial led by Bluebird Bio, that effectively arrested Colón’s sickle cell condition. Unpublished interim data from 19 participants in the trial followed for at least six months, with a history of severe vaso-occlusive events (VOEs), or sickle cell crises similar to Colón’s, demonstrated 19complete resolution of severe VOEs in all patients, according to a company spokesperson. The trial is ongoing, and data are not yet complete, so caution is prudent, but “the promise is tremendous,” the spokesperson said.

The next-generation technology, gene editing, is another level altogether. Gene editing enables scientists to precisely target abnormal genes of many organisms (bacteria, plants, animals), snip the DNA, then remove, replace or add new DNA at the incision site. “Imagine you have a car with a flat tire,” says Fyodor Urnov, a gene editing expert at the University of California, Berkeley, and the Innovative Genomics Institute. “Gene therapy is taking a fifth wheel and putting it somewhere on the car and hoping it runs. Gene editing is repairing the flat.”

The technology received a huge boost with the arrival in 2012 of a gene-editing tool called CRISPR, an acronym for Clustered Regularly Interspaced Short Palindromic Repeats. The CRISPR technology is easier to use, cheaper and more efficient than older genome editing methods, enabling scientists to quickly alter DNA sequences to modify gene function. That could positively affect the health of the organism, or even reverse disease symptoms.

“It is often described as ‘molecular scissors,’” says Jennifer Doudna, its co-inventor and Nobel laureate in chemistry. “Scientists can harness CRISPR to not just cut specific locations in DNA of any organism, but also to provide a template to repair the DNA.”

In sickle cell disease, or SCD, a single mutation in the beta-hemoglobin gene leads to red blood cells that become crescent-shaped, or sickled. These sickled cells are sticky, and they clog arteries, preventing adequate oxygen delivery to tissues in the body. This can cause acute debilitating pain episodes, such as the kinds that Colón experienced, and may result in any number of complications: anemia, strokes and organ damage involving the lungs, heart, kidney, spleen, etc.

Patients often have a poor quality of life because of repeated hospitalizations and transfusions, and face the prospect of early deaths. In regions like Africa and the Middle East where health care resources are much more limited, many children die of SCD before their fifth year of life.

CRISPR is accelerating the pace at which treating such disease via genetic engineering is moving. Matthew Porteus, a gene-editing pioneer, founder of CRISPR Therapeutics and professor of pediatrics at Stanford School of Medicine, says researchers currently employ two primary gene-editing strategies in their attempt to cure sickle cell patients. One type uses CRISPR to essentially flip a genomic switch, turning on healthy fetal hemoglobin production again, which was shut down early in life. The advantage? The fetal hemoglobin doesn’t sickle.

A second gene editing strategy, gene correction, directly fixes the mutation in a faulty gene that has caused disease. In the case of sickle cell, the correction allows the body simply to produce normal hemoglobin. Researchers have logged a staggering amount of work trying to get to this point.

While progress has been made with the approval of several new drugs to help alleviate the symptoms of SCD, they are not curative. Bone marrow (stem cell) transplants are the only option for cure, but finding healthy donor matches can be challenging. Enter the genomic therapies, which Theodore Friedmann of the University of California, San Diego, first proposed for genetic disease in 1972, and which took a step toward reality the same year with the production of recombinant DNA by Paul Berg at Stanford University. In the 1980s, scientists showed how DNA could be delivered into cells, and by 2003 the entire human genome had been deciphered.

There were setbacks, and even when gene editing systems came to be as the new century opened, using them remained challenging and time-consuming. Then, came CRISPR, slicing and dicing its way into the clinical arena, poised to potentially change not only treatment but prevention of disease. The technology is already being employed by scientists researching cancer, lymphoma, AIDS, cystic fibrosis and more, for diagnostics including SARS-CoV-2 detection, and even in agricultural efforts to engineer larger tomatoes, non-browning apples, and longer-lasting mushrooms.

In real time, the hope is that genetic editing will provide a cure for a very common and debilitating inherited disease, sickle cell. Several experts with whom I spoke suggested, for the first time, that a cure for SCD may be in the offing.

That is an astounding thought. In practice, the ability to excise nonworking genes and replace them with normally functioning ones may help blunt the worst effects of a wide variety of diseases. When the 2020 Nobel Prize in Chemistry was awarded to Jennifer Doudna and Emmanuelle Charpentier for their invention of this technology, the secretary-general of the Royal Swedish Academy of Sciences, Goran K. Hansson, put it plainly: “This year’s prize is about rewriting the code of life.”

And scientists are already working on next-gen CRISPR technology that’s more precise. “Base editors,” which correct single-letter DNA mutations without cutting the DNA double helix, have been shown recently to treat sickle cell disease in mice. And then there are “prime editors” which can replace even larger DNA snafus.

There remain many questions to consider, including the moral implications of how far a concept like gene editing might be taken, as well as cost, safety and accessibility (experts say current treatments can run to $2 million). Says Doudna, “A true cure means a treatment for everyone who needs it, which is why we’re hard at work on the next generation of therapies to bring down the cost and make it more accessible.” And, as gene editing is not perfect, “The long-term safety of all the genetic modification therapies will have to be studied carefully,” says Porteus.

In the coming months, a University of California Consortium (U.C. San Francisco, U.C. Berkeley and U.C.L.A.), will conduct the first human open label phaseI–II trial using nonvirally delivered CRISPR technology developed at the Innovative Genomics Institute. Scientists hope to alleviate the suffering of sickle cell trial participants by substituting their faulty beta-globin gene—the one that causes the disease—with a corrected one, directly fixing the mutation in their blood stem cells.

“The more of the mutations that are corrected and propagated in healthy red blood cells, the more likely a cure is to follow,” says Mark Walters, the trial’s principal investigator and a professor of pediatrics at U.C. San Francisco. “Sickle cell disease will be cured using genomic therapies.” That is the highest use of the technology, after all—and it may become a reality even as we continue to learn about the field.

This is an opinion and analysis article; the views expressed by the author or authors are not necessarily those of Scientific American.