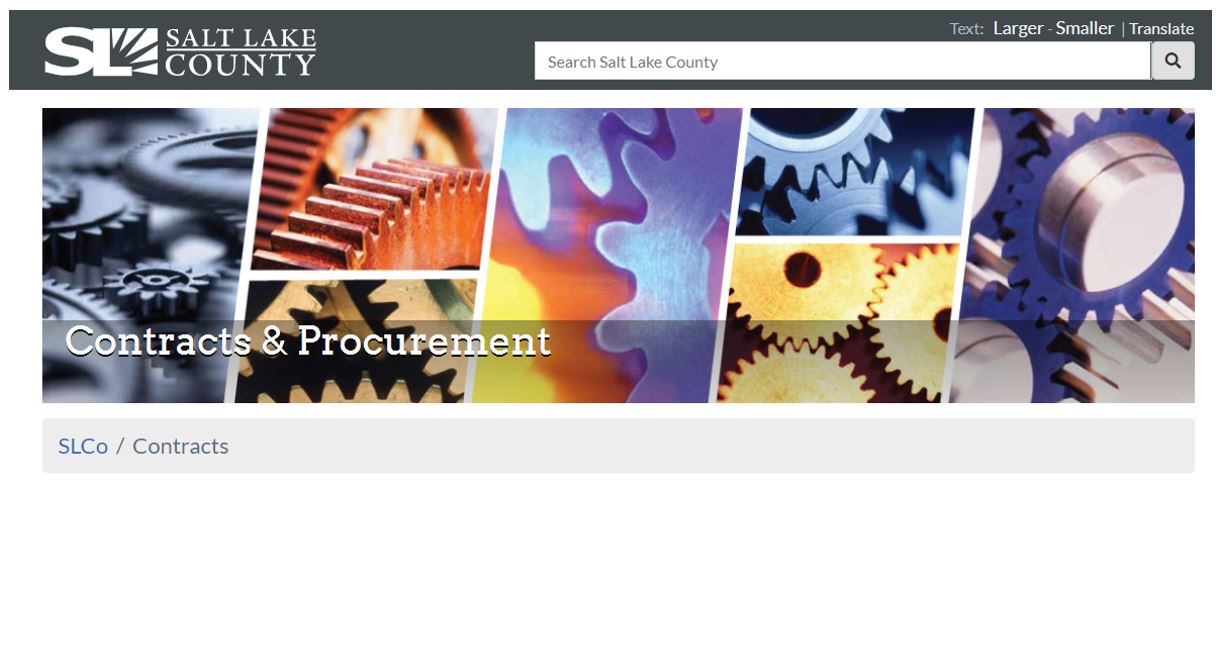 It fits within the scope of behavioral health integration that the State of Utah has promoted for select counties, but goes a little further in terms of standards and expectations.

Optum currently has the contract. Optum is, of course, part of United Healthcare. The RFA calls specifically for an MCO, which generally speaking, Optum is not. Its cousin, United, fits the bill, however.

Taken as a whole, from the context of state policy to the language of the RFA, I think there are three observations I’d share with county policy makers, like Salt Lake County, which I’ve picked up as other counties in other states try their hand at a modified integrated behavioral health model. These apply directly to SLCo, but they fit with a range of counties looking to get smarter about system-level reform related to behavioral health.

Counties are often better served having a partner independent of MCOs

Integration of behavioral health can take a range of forms. Each form, to be successful, needs to address the concern of counties that they not have their interests and voice be subsumed or overwhelmed by private sector health care.

This concern is political and cultural. Part of it simply relates to concerns about change.

Get the latest state-specific policy intelligence for the health care sector delivered to your inbox.

But the concern is rooted in the reality that if the health care system fails, particularly the behavioral health system, that will lead to costs borne by the county or community that don’t show up on the MCO P&L.

For example, unmet community behavioral health needs can lead through a cascade of events to higher levels of crime, homelessness and incarceration.

Each of those includes non-financial costs to the community. But there are very real costs to the county, as well, through increased costs to the public safety budget at cities and counties. So, making sure the interests of counties are given voice independent of other state or local interests is important.

Pierce County in Washington State has threaded the needle well.

They contract with Beacon Health Options to manage something called a behavioral health administrative services only (BH-ASO). In Washington State, integration of behavioral health happens at the MCO level for mild to moderate services. However, the BH-ASO allows the county to braid state and local funding to manage crisis services ahead of the hand off to MCOs. The hand off from BH-ASO to MCO (there are five MCOs in Washington State) requires contractual provisions between the BH-ASO and MCO.

Because the long term management of the individual in crisis falls to the MCO, the MCO has contractual performance responsibility to the county, through the BH-ASO, to keep these individuals out of crisis.

Moreover, a community voice is at the table as well through an accountable community of health. This ACH exists in state statute and gives members of the community a voice in the accountability of the health system, including behavioral health. While ACH’s are regional in nature, Pierce County’s large population (900k to SLCo’s 1.16m) allows it to have it’s own ACH voice.

The point here is that if the county wants to hold the broader health system accountable, and ensure that county interests are at the table, it needs some structural way to make sure this takes place. Having a contracted entity that isn’t an MCO is helpful here, in my view.

Counties can be very good at procurement, but that is a different skill set from service provisioning

Counties have a lot to learn from states here.

When Medicaid was created, states which took on the program in the 70s and 80s became, in essence, insurance companies. They were now responsible for claims processing, customer service and of course most of the risk associated with the program, buttressed by the federal contribution to the program.

In the 80’s however, many states started to move to a managed care model where the insurance plan services were contracted out to private companies. California was an early adopter moving to managed care in the 1970s. States like Washington moved in the 1990s. Alaska still hasn’t made the migration.

There are a number of challenges with managed care, but the more important benefit is that it aligns the public agency’s scope of work with its primary mission. It allows counties and states the opportunity to allocate dollars in service of their community. Rather than worry about operations, public entities can set a vision that reflects their community and then direct private actors to meet that mission. Counties and the state can then hold the private agency accountable to outcome metrics that meet the agency’s vision.

This allows the private sector to focus on what it does well, while allowing the public sector to be the vision holder and judge of quality rather than the operator.

States have largely migrated to a procurement-model to organize health care. Counties are often laggards here, but they don’t have to be.

San Diego County does this well. It contracts across a range of services in multiple departments, coordinating those within the Health and Human Services Agency. It takes an approach focused on integration and braiding of services to meet its community vision.

“The Agency integrates health and social services through a unified service-delivery system that is family focused and community-based. Services are delivered in a cost-effective and outcome-driven fashion.”

For perspective, here is the scope of the Behavioral Health Services Department, just one of the agency’s “six service departments, six regional operations, and ten administrative support divisions.”

“The County of San Diego’s Behavioral Health Services (BHS) department provides mental health and substance use disorder services to over 111,000 San Diego County residents of all ages. Services are provided through 9 county-operated programs, over 300 contracts, and 800 individual fee-for-service providers.

This is a different cultural approach from service provisioning and requires different staffing. States moved from needing call center employees to legal administrative support as they moved to managed care.

By comparison, counties would need to move away from a focus of providing those safety net services. Instead, counties can focus on paying for those services and holding their private partners more accountable than they can often hold themselves when services are internally provided.

It takes intention to build a procurement-focused government. But, doing so allows for an alignment of strengths and interests by both private and public sector partners.

Counties have more leverage than they think. Successful innovation can help build that.

Let’s be honest: counties are not always the most innovative voice in health system reform.

Because there are more counties with small, rural populations than there are urban counties, often there are a large number of county elected officials who skew to these smaller, less dynamic economies. These economies, populations and county governments are often playing catch up to their larger, more urban neighbors. Moreover, the strategies employed by the larger counties may be ill-fitting for the problems rural counties are trying to address.

So, the collective voices of these counties can often hold considerable sway against the innovations coming out of state government, particularly if those innovations are focused on population centers.

But, that legacy of a slow-to-reform approach by counties might offer SLCo a unique opportunity

Urban counties have already been given the go ahead by the Dept. of Health to innovate in the space where integration of behavioral health and physical health exist. So, the threat to concerned rural counties has already been significantly mitigated.

That creates only political upside for trying something innovative, stretching the bounds of how SLCo has traditionally approached behavioral health. Moreover, by employing the two elements mentioned above (keeping a distinct non-MCO voice for the county partner and developing the skills of procurement and accountability), other counties will be able to learn from SLCo’s approach. In other words, success at SLCo might be scaled statewide in a way that might empower rural counties, further supporting the innovation at Salt Lake County.

I think you see that success in Hawaii, as strategies employed related to housing and the social determinants on Oahu are now getting scaled statewide.

I think you see that in Arizona, where the approach to behavioral health integration has been modified a few times. Strategies like the regional behavioral health authority (RBHA) get tested in the Maricopa County region first, later getting modified and scaled to other parts of the state.

In Texas, you see a distinctly regional approach at the county level related to social determinants. Waiver funds organized through the regional healthcare partnership (RHP) model have built local programs that are now being discussed for statewide scaling as part of a conversation about renewing its waiver.

The point here is that counties that lead on innovation, where the opportunity arises, can create broader momentum for reform in the state.

So, don’t be shy, SLCo. Now is a good time to stretch. There is little downside. And your success will likely create lessons learned for the rest of Utah as it continues to iterate down the path of reform.