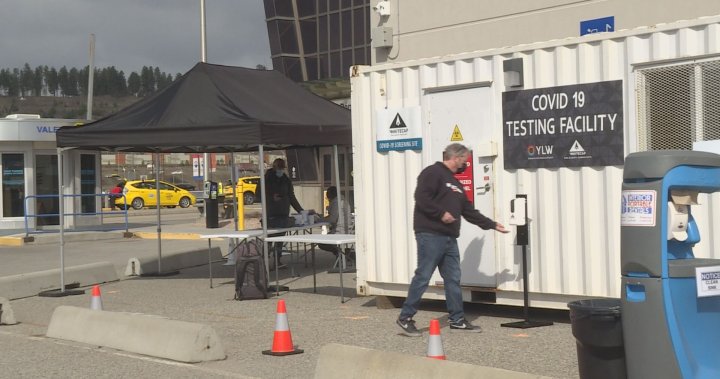 LNG Canada workers flying out of Kelowna to their worksite in Kitimat will now get a rapid COVID-19 test before they board their flight.

YLW is joining a handful of other airports in B.C. and Alberta where similar testing is being offered to LNG workers.

Tuesday was the first day for the pre-boarding testing in Kelowna.

The airport sees it as another layer of safety that can keep asymptomatic people who don’t realize they have COVID-19 from getting on a flight and unknowingly exposing others.

“The most important thing about this is it gets our B.C. economy going because they can actually add more workers to the LNG campsite,” said airport director Sam Samaddar.

“It really protects their temporary home and that community as well as when they come back home to their own community.”

The airport testing is part of LNG Canada’s COVID-19 safety plans after outbreaks were declared at its Kitimat site in November and December.

Workers get their results on their phones in a text or email in around 20 minutes.

However, the company doing the testing freely acknowledges the antigen tests aren’t perfect.

“There is around a 20-per cent false-negative result,” said Chris Geisler, the co-owner of Whitecap Risk and Safety Consultants.

“But our feeling is applying a screening system like this at all, even with that weakness,…is still better than not applying it at all.”

With Kelowna International Airport expecting low passenger volumes this year similar to what it saw in the early 1990s, YLW sees testing as one of many possible solutions to eventually returning people to the sky.

“Having these kinds of pilot projects and testing shows that it can be done,” said Samaddar.

“What we are trying to do is built confidence both on the federal government level that here is a way of dealing with these things, but also the consumer confidence level. I think people will get on board an aircraft if they know that everybody has been tested that’s boarding that airplane.”

Samaddar said the airport is looking to the federal government for direction on how to restart aviation including what role testing might play.