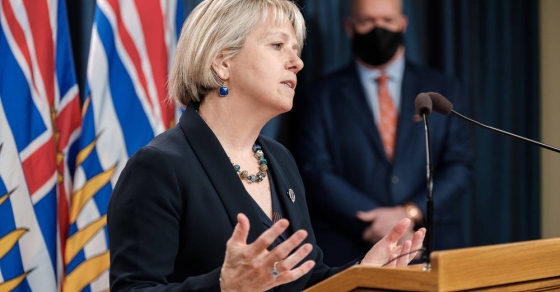 The province is laying out new rules requiring younger students to wear masks at school, while Island Health is anticipating “significant numbers” of exposures in schools in the coming weeks.

Provincial health officer Dr. Bonnie Henry announced new guidance on masks during a briefing on Monday, along with a suite of “circuit-breaker” restrictions designed to slow transmission COVID-19 in the face of a spike in new cases.

“It is one of the many measures that can be used to help prevent transmission in our school settings,” she said.

While the provincial website says public health guidance has been updated to “support and encourage students” to wear masks at schools, a spokesman for the British Columbia Teachers’ Federation said the Health Ministry has confirmed the new guidance will be identical or similar to an order issued for Surrey schools.

The Surrey order says school administrators must require students in Grades 4 to 12 to wear a face covering at all times inside the school, and strongly recommends masks for younger students as well.

The teachers union, which has been calling for a mask mandate in schools, welcomed the news, saying in a statement: “Thank you to those who have worked so hard to get this important safety measure in place. Teachers will be relieved to have this added layer of protection.”

The BCTF expects a province-wide order to be published Tuesday.

The new rules come a day after Island Health released a letter warning staff and families of an anticipated increase in school exposures as students return from their two-week spring break.

In the letter, the health authority says the region has seen a significant increase in COVID-19 cases over the past few weeks, with many positive cases reporting higher numbers of social contacts while infectious, as well as non-essential travel, large social gatherings and multiple social groups.

The number of children contracting the virus is also on the rise, nearly doubling from 22 cases the week of March 7 to 43 cases during the week starting March 21, the health authority says.

“All signs indicate that there will be significant numbers of exposures at schools in the weeks to come,” says the letter, dated March 28.

The health authority urged parents to keep their children home from school even with mild symptoms and to consider sending all children to school in a mask, regardless of their age.

Angela Carmichael, director of communications for the Victoria Confederation of Parent Advisory Councils, said many parents are feeling anxious and guilty about sending their children to school after receiving the notice, while others decided to keep their kids home.

Carmichael’s two children were back in their classrooms Monday. Her seven-year-old is young enough that he has not been required to wear a mask, but she told him to wear it all day as a result of the warning. Her son at Central Middle School has been wearing a mask since the fall, she said. The province brought in a mask requirement for middle and high school students in February.

Carmichael said parents support calls from staff for a mask mandate in schools.

She would like to see changes in the response to confirmed cases in classrooms, with the entire class going into isolation and learning online for two weeks.

“It would make it simple, and everybody would know they’re being kept safe,” she said.

On some occasions, entire classes have isolated after a confirmed case, but generally public health identifies close contacts and asks them to isolate.

Waldron said the rise in cases in children on the Island is concerning but not unexpected.

“We’ve seen that COVID cases are rising. It seems like it was only a matter of time until that was the case on the Island as well,” she said.