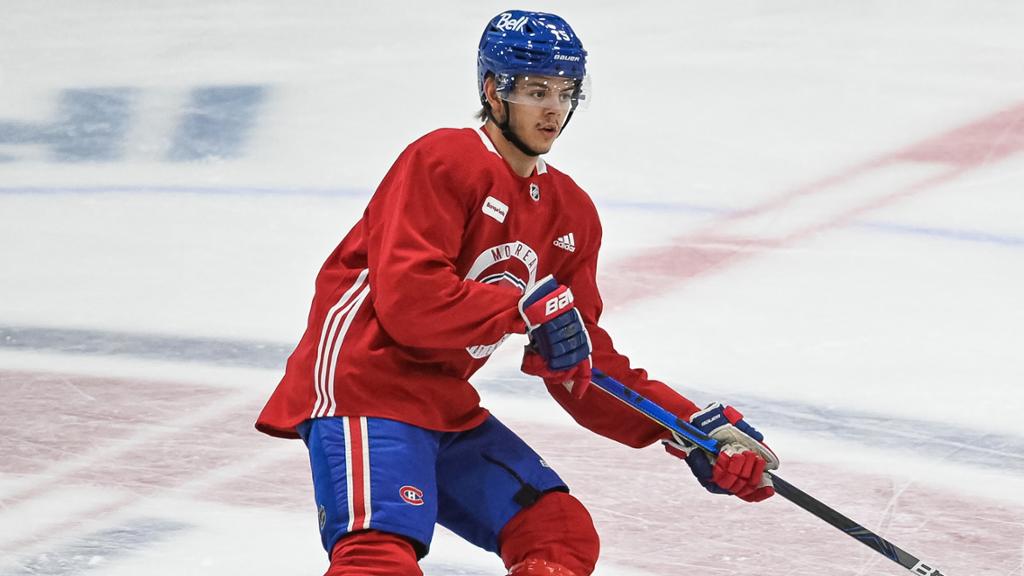 Jesperi Kotkaniemi took part in practice when the Montreal Canadiens returned to the ice for the first time in a week Monday.

Four Canadiens home games, including a three-game series against the Oilers last week, were postponed after Kotkaniemi and fellow forward Joel Armia were placed on the NHL COVID-19 protocol list March 22. There was a morning skate before the Canadiens’ scheduled game against the Oilers that night became the first to be postponed. Montreal also had its game scheduled for Sunday against the Ottawa Senators postponed.

Canadiens players were tested Monday before resuming activities at the practice facility in Brossard, Quebec.

“That’s not a decision we make,” forward Brendan Gallagher said of the pause. “You know if it was up to us we would have played obviously, but they have a lot of other things to worry about. They couldn’t risk it spreading, and I guess the type of virus, I don’t know much about this, but it was a different variant.

“So I guess they were worried about it being a little more contagious and they just thought it was in the best interest to shut us down. We had no choice but to listen. We would have loved to keep playing, but we’re back now, and hopefully we don’t have to go through it again.”

Kotkaniemi was cleared Monday and practiced on a line with Paul Byron and Artturi Lehkonen.

“We had some fun with him for sure, but he’s good,” forward Brendan Gallagher said of Kotkaniemi, 21. “‘KK’ likes to laugh and smile pretty much anytime you talk to him, and the smile hasn’t left him, so he’s feeling good. I think he was probably a little bit worried there. He’s a young guy, a little bit concerned, but obviously it’s good to have him back with the team. He’s a big part of our group, so we’re happy to not have to lose him.”

Armia remains in the protocol.

“That’s something I cannot go deep into, but within the next week or so we should be having him back,” coach Dominique Ducharme said.

Forward Tyler Toffoli (lower body) did not practice and will not play Tuesday in Montreal’s first game since a 5-4 shootout win against the Vancouver Canucks on March 20.

“He’s getting better and better,” Ducharme said. “He won’t be playing tomorrow, but he’s going to be on the ice in the next few days.”

Forward Michael Frolik is expected to make his Canadiens debut Tuesday. He agreed to a one-year, $750,000 contract Dec. 23 and has practiced with Montreal all season.

Forward Eric Staal, acquired in a trade from the Buffalo Sabres on Friday for a third-round and a fifth-round pick in the 2021 NHL Draft, will not play. He is subject to a seven-day quarantine.

“I think he’s going to bring a lot of depth for our team,” forward Phillip Danault said. “We’ve got some young centermen, and he’s got a lot of [Stanley Cup] Playoff games (62) as well. And he’s a winner, so it’s a really good move for us.”

The Canadiens (14-8-9) are in fourth place in the seven-team Scotia North Division with 37 points, two ahead of both the Calgary Flames and the Canucks. The top four teams in the division will make the playoffs. Montreal has played five fewer games than Calgary and six fewer than Vancouver.

“Consistency hasn’t been there throughout the first 31 games for sure, but I think as a group you hope we’ve been able to learn from it,” Gallagher said. “And I think we have. Nothing happens in this game without it being a learning experience, and I think what we’ve been through, we understand how hard it is to get out of funks when you do start going the wrong way and you let bad habits creep into your game.

“We had to work incredibly hard to get out of those things. Before we shut down, we felt like we made those improvements and our game was just kind of starting to find a way. So hopefully we can back to where we left off and make sure that those bad habits don’t seep back into our game because those things, especially with the limited practice time that we’re going to have, it’s something we just can’t afford to have happen.”