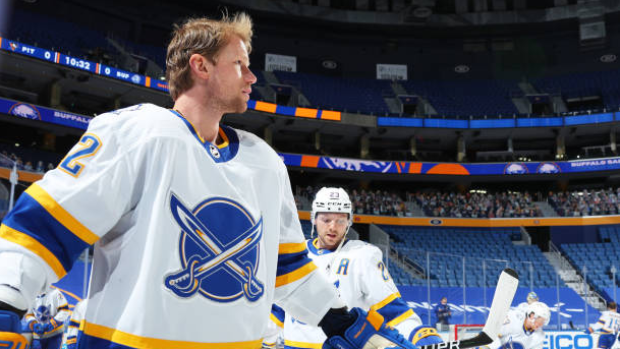 
Keep updated on all the injury news and roster updates from around the NHL with daily Ice Chips.

New acquired veteran forward Eric Staal will go on the NHL’s COVID-19 list on Sunday as he’s currently quarantining for seven days after being picked up from the Buffalo Sabres on Friday. Staal told reporters that only having to quarantine for one week as opposed to 14 days was much more manageable.

“Fourteen days waiting was a long time, especially if you were traded in the middle of the season. A week was acceptable,” he said.

#Habs Staal says a two-week quarantine was a factor in Cdn teams being on his modified NTC. “Fourteen days waiting was a long time, especially if you were traded in the middle of the season. A week was acceptable.” Staal says the 7 days will be good to rest up. @TSN_Edge

Additionally, rookie forward Cole Caufield, who was signed to a three-year entry-level contract on Saturday night, will arrive Montreal in the “next few days.”

According to TSN Hockey Insider Pierre LeBrun, Caufield will start in AHL Laval after his quarantine is over.

Caufield, 20, led all skaters in the Big Ten division in 2020-21 with 30 goals and 52 points in 31 games with the University of Wisconsin and led the NCAA in goals.

#Habs official says Caufield will arrive in Montreal in the “next few days”.

Left winger Jack Kopacka has been re-assigned to Belleville Senators while left winger Alex Formenton was re-assinged to the taxi squad.

Roster update: The #Sens have made the following roster moves:

LW Alex Formenton has been recalled from the B-Sens and re-assigned to the team’s taxi squad.

Head coach David Quinn, who has been out since March 17 due to COVID-19 health and safety protocols, will be back behind the bench Sunday afternoon when the Rangers take on the Washington Capitals.

-Kinkaid in net; Shesterkin backing up

-Coach Quinn is cleared + will be behind bench