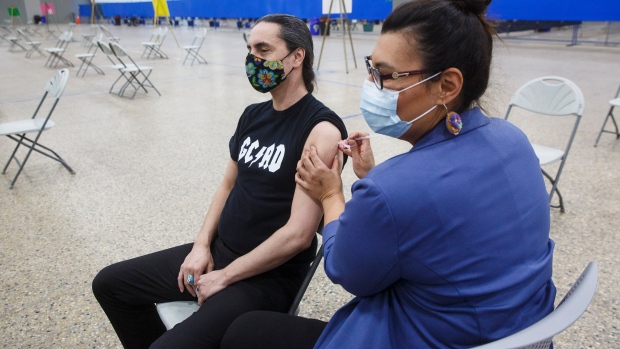 Ten of them are vaccines.

Five of those are for COVID-19.

Dr. Supriya Sharma, the chief medical adviser at Health Canada helping oversee the review process, has never seen anything like the speed with which the COVID-19 vaccines got approved.

“I mean, unprecedented is the one word that we’ve been overusing, but there’s nothing even close to comparable to this,” she said in an interview.

The five non-COVID vaccines approved, four for influenza and one for shingles, took an average of 397 days from the day the company applied for approval in Canada, until that approval was granted.

That includes 61 days for Pfizer-BioNTech, 72 days for Moderna, 95 days for Johnson & Johnson, 148 days for Oxford-AstraZeneca and 34 days for Covishield, the AstraZeneca vaccine produced by the Serum Institute of India.

Covishield is a slight outlier because Health Canada mostly just needed to review the manufacturing process, as the vaccine is the same formula as the AstraZeneca doses made elsewhere. Sharma likens it to the same recipe made in a different kitchen, but the kitchen still needs to be up to snuff.

A sixth vaccine from Novavax is still under review, with the results from its big clinical trial not expected until next month. It has been under review by Health Canada for 58 days at this point.

The speed has raised fears among Canadians that everything moved too quickly. Many medical experts worry it is contributing to hesitancy to get the vaccines.

But Sharma says speed did not come at the expense of safety.

“That’s the only priority, the only thought, is what’s best for Canadians,” she said. “There’s no other motivation anywhere.”

Lack of research funds can slow down new drug development, but in this case, as lockdowns shuttered economies worldwide and death tolls mounted, countries poured billions of dollars into getting a vaccine to get us out of the pandemic.

Most of the successful vaccines for COVID-19 so far use existing vaccine technology that was adjusted for the SARS-CoV-2 virus that causes COVID-19.

They start with lab studies to check for safety on animals and see how the vaccine works in a lab setting on blood samples and on samples of the virus.

Then it is tested on a very small number of humans to look for any glaring safety concerns. Then they test it on a slightly larger number of people — usually fewer than 100 — to look for safety and the development of antibodies.

If that goes well, the trial is expanded to thousands of volunteers, some of whom get the vaccine and some of whom don’t. Then they wait to see how many in each group get infected.

Phase 3 trials usually take between one and four years. For the vaccines approved in Canada so far, phase three trials took about three months.

Sharma said the time a trial takes depends on finding enough patients to participate, and then having enough of their trial participants get sick to know how well the vaccine is or isn’t working.

Fortunately and unfortunately, COVID-19 was spreading so rampantly in so many places, getting enough people exposed did not take very long.

While the drug makers were busy getting the trials going, Health Canada was getting ready for their submissions. Sharma said discussions about COVID-19 vaccines began in earnest with international bodies in mid-January 2020, before Canada had even had a single confirmed case.

“I think we knew that … we had a virus that was going to be transmissible, that could be causing significant respiratory disease, and that there would be an interest in therapies and vaccines definitely, very early on,” said Sharma.

It was determined quickly that this virus was so new there was no existing vaccine that could be adjusted quickly, as had happened with the H1N1 pandemic in 2009.

By March, Health Canada had started putting teams in place to review new therapies and vaccines for COVID-19 as soon as they were ready.

Each team was made up of 12 to 15 people, with varying specialties. There was some overlap between the teams but not a lot because many vaccines were being reviewed at the same time.

The experts on the file included infectious disease specialists, pharmacologists, biostatisticians, and epidemiologists.

They needed an emergency order from Health Minister Patty Hajdu to do a rolling review. Normally drug makers can’t apply until they have every piece of data ready but with a rolling review Health Canada scientists can start reviewing the data as it becomes available.

Hajdu granted that on Sept. 16.

Then the vaccine submissions began pouring in — AstraZeneca applied Oct. 1, Pfizer Oct. 9, Moderna on Oct. 12, and J&J on Nov. 30. The Covishield application came Jan. 23 and Novavax submitted on Jan. 29.

Sometimes they were doing it in the middle of the night. Collaborations with international partners in very different time zones, meant 2 a.m. or 4 a.m. video conference calls were not unusual.

When Pfizer and Moderna were reviewed, it was entirely based on clinical trail and pre-market data because the vaccines hadn’t been approved anywhere else. Canada was the third in the world to authorize Pfizer on Dec. 14th, and second to approve Moderna Dec. 23.

By the time Health Canada authorized AstraZeneca — a review process complicated by some mistakes during the clinical trial in dosing and the number of seniors among its volunteer patients — it was also able to pull data from real-world use of the vaccine in the United Kingdom.

The regulatory work doesn’t end when the authorization is announced. The post-market surveillance data is still non-stop. The recent blood clot concern with the AstraZeneca vaccine took a lot of time, but just monitoring the data submitted by the vaccine makers on adverse events overall is still critical.

To date, the adverse event reports in Canada have not been different than what was seen in clinical trials.

Companies also adjust their submissions requiring further review. Pfizer has so far asked for two changes, one to the number of doses per vial and another for the temperature at which the vaccine has to be kept.

If anything changes on safety, or if the efficacy seen in a clinical trial doesn’t play out in the real world, Sharma says Canada will not hesitate to make adjustments. But those decisions will be made by Canadian experts, said Sharma, the same ones who have been on the files all along.

This report by The Canadian Press was first published March 28, 2021.