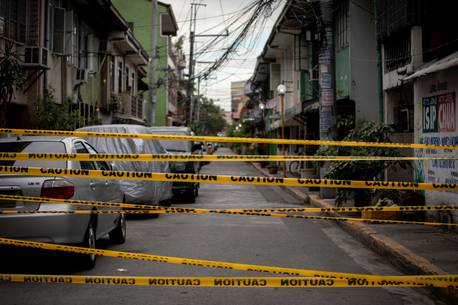 
MANILA (Reuters) – Manila and nearby provinces will return to stricter quarantine measures from Monday, a senior official said on Saturday, as the Philippines battles to contain a surge in COVID-19 cases that has strained hospitals.

Presidential spokesman Harry Roque said the measures, which will be in place until April 4, will ban non-essential movement, mass gatherings, dining in restaurants. They represent a further tightening of curbs imposed on March 22.

Roque said the government will intensify tracing and conduct house-to-house visits to search for people with COVID-19 symptoms. There will also be a “heightened presence” of police and military personnel to enforce protocols, he added.

The capital region, a congested urban sprawl of 16 cities that is home to at least 13 million people, has accounted for more than two-fifths of the country’s more than 712,000 COVID-19 cases. There have been more than 13,000 deaths nationwide.

Authorities attribute the spike in infections to the more transmissible new coronavirus variants like those first identified in South Africa and Britain. Both have been detected in the Philippines.

Roque told a media briefing that the threat was drastic and warranted a “drastic response”, adding the tighter measures will give health workers breathing space as hospitals in the capital near critical capacity.

Lockdowns have taken a huge toll on the Philippine economy, which contracted by a record 9.5% last year. Roque said the government timed the reimposition of tougher curbs during the week ahead of Easter – so the impact on the economy will be less severe as many businesses will be closed anyway during Holy Week celebrations.

Public transport will be allowed to operate on a limited capacity, and movement of essential goods can continue unimpeded, he said.