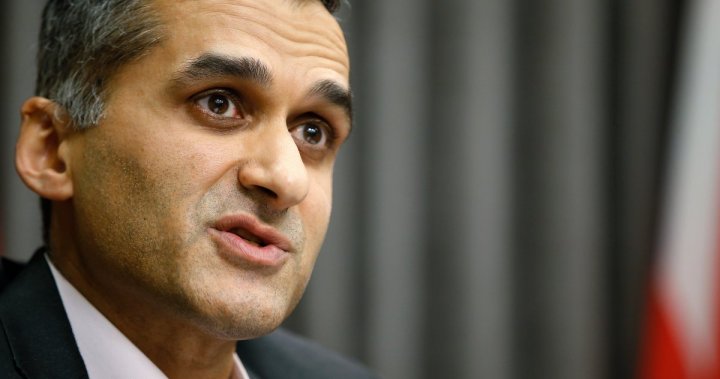 As Manitoba reported 114 new cases and three new deaths due to COVID-19, the province acknowledged long line-ups at the largest vaccination site Friday.

“This is due to a combination of having a large number of appointments today and an issue related to our scheduling booking software for staff. The staffing system issue led to a shortage of staff at the site today,” said Atwal.

“As soon as this issue was identified, the team began reaching out to bring additional staff on site to make the process go more smoothly and reduce waits.

“We also ask that people only arrive 15 minutes prior to their appointment time.”

Numerous people called in or emailed Global News and 680 CJOB Friday with their tales of being in line.

Kelly Thiessen said her mother had an appointment for 5:10 p.m. and was told it would be a minimum 2.5-3 hour wait.

“The lineups outside are wrapped around the building completely,” Thiessen said.

“We did get a parking spot in the lower level, it’s full. The upper parking is full. And we got up to the main floor and there must be a thousand people all milled around, jammed in and waiting to get a number to go in to another room that must have 200 people and they’re waiting for their needle.”

“Roads are blocked as people wait for parking, once you find a place to park you have to stand in at least a 100-person line where NO ONE is 6 feet apart,” said Gaylene Nemeth.

“There’s is some civilian standing on a bench out front trying to direct the walk-up traffic for the winding line outside – doesn’t even work here, just trying to be helpful — and thank God he is,” she added.

“What the hell is going on? How is this ‘organized?’”

The 114 new cases of the virus bring the total number of lab-confirmed cases in Manitoba to 33,810.

The current five-day test positivity rate is 4.4. per cent provincially and 3.6 per cent in Winnipeg.

Public health officials said 46 of the new confirmed cases are of of the B.1.1.7 COVID-19 variant — 44 from the Winnipeg health region and two from the Southern Health–Santé Sud health region.

Earlier this week the Pallister government said it had decided to make only minor changes to COVID-19 public health orders when current orders expire Friday.

Under the latest rules, the government is increasing the number of people allowed to gather outdoors to 25 from 10.

The limit on people allowed to attend weddings and funerals will also rise to 25 people from 10.

The 50 per cent capacity rule for retail outlets will change to a maximum of 500 people from 250.

People attending drive-in events will be allowed to leave their vehicles, as long as they continue to follow other rules such as physical distancing.

The government had floated a much broader reopening last week, but the province’s chief public health officer said caution is still needed in the coming weeks, citing concerns over rising variant case numbers and the need to keep stability in the province’s health-care system.