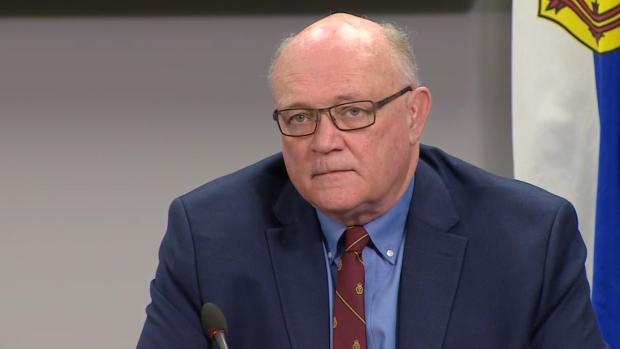 All five cases are in the province’s Central zone. Three are close contacts to previously reported infections, one of which was the case identified on Thursday at Millwood High School in Middle Sackville.

The other two cases remain under investigation, according to the health authority.

“Based on public health assessment, the probable case is being treated as though it is a lab-confirmed positive to ensure all precautions are taken,” wrote public health in a news release on Friday.

According to a news release from the province, the person did not attend school on Friday and is self-isolating. The school is closed to allow for deep cleaning, testing, and contact tracing, and is expected to reopen to students on April 1. In the meantime, students will learn from home during the closure.

Public health says anyone who is a close contact to the individual will be contacted and advised of the next steps to take.

Two of Nova Scotia’s previously reported cases are now considered resolved, with the total number of active cases increasing to 27.

Health officials in Nova Scotia are advising residents to avoid non-essential travel to northwestern New Brunswick because of a rise in COVID-19 cases in the area.

Officials say they are also concerned that New Brunswick authorities have confirmed in the Edmundston, N.B., area the presence of a more contagious variant, first identified in the United Kingdom.

On Thursday, Nova Scotia officials stressed there is no change to a policy announced last Friday that opened the province’s border and allows New Brunswick travellers to visit Nova Scotia without self-isolating.

Premier Iain Rankin says the advisory follows a move by New Brunswick to place Edmundston and its surrounding areas into that province’s red alert phase of COVID-19 restrictions.

“Yesterday, we advised Nova Scotians to avoid travel to the city of Edmundston and the surrounding communities,” said Rankin in a news conference on Friday. “Dr. Strang and I are watching the situation very closely and if we need to close our borders to New Brunswick again, we will.”

Chief medical officer of health Dr. Robert Strang says travel to the area should be avoided “unless absolutely necessary.”

“There is no reason to close the border at this time. The cases are isolated to that particular area in northern New Brunswick and travel in and out of that area is restricted,” said Strang.

“However, if the outbreak starts to move into other parts of New Brunswick, or I feel the situation is getting worse and Nova Scotians are at increased risk, I will not hesitate to make a recommendation to the premier to reinstate the 14-day quarantine for people coming from New Brunswick.”

Beginning Friday, anyone who is 75 years of age and older can begin booking their COVID-19 vaccine appointments.

Public health says most community clinics and participating pharmacies for this age group have available appointments. More appointments will also be added to new and existing clinics next week, according to Strang.

The province has completed 412,993 tests since the pandemic began.

Since the beginning of the pandemic, there have been 1,704 COVID-19 cases in Nova Scotia. Of those, 1,611 cases have recovered and 66 people have died due to the novel coronavirus.

There is currently no one in hospital due to COVID-19.

There are cases confirmed across the province, but most have been identified in the Central Zone, which contains the Halifax Regional Municipality.

The provincial government says cumulative cases by zone may change as data is updated in Panorama, the province’s electronic information system.

The numbers reflect where a person lives and not where their sample was collected.

Nova Scotia’s COVID-19 online dashboard provides an update on the amount of vaccines that have been administered to date.

Of the vaccines administered 42,110 went to health care workers, and 7,839 were long-term care residents.

As of Tuesday., the province has received a total of 119,110 doses of COVID-19 vaccine, and are holding 21,365 in reserve for second doses and planned clinics.

Nova Scotia is expecting to receive a shipment of AstraZeneca vaccine in early April, which will continue to be offered to people 60 to 64 years of age.

Strang says the province received news Thursday night that a shipment of Moderna that was expected to arrive in Nova Scotia next week will be postponed by about a week or two.

“This highlights the importance of only opening appointments when our supply is confirmed,” said Strang. “We don’t want to have people book appointments and then have to cancel those appointments because we didn’t have certainty of supply.”

All Nova Scotians are encouraged to get vaccinated against COVID-19 as soon as they are eligible.

Public health is strongly encouraging Nova Scotians to seek asymptomatic COVID-19 testing, particularly if they have had several social interactions, even with their own social circle.

COVID-19 tests can be booked through the province’s online self-assessment COVID-19 tool, or by calling 811.

People can also visit one of Nova Scotia’s many rapid pop-up testing sites that continue to operate throughout the province.

The app, which can be downloaded through the Apple App Store or Google Play, notifies users if they may have been exposed to someone who has tested positive for COVID-19.

Anyone who experiences a fever or new or worsening cough, or two or more of the following new or worsening symptoms, is encouraged to take an online test or call 811 to determine if they need to be tested for COVID-19:

With files from The Canadian Press.