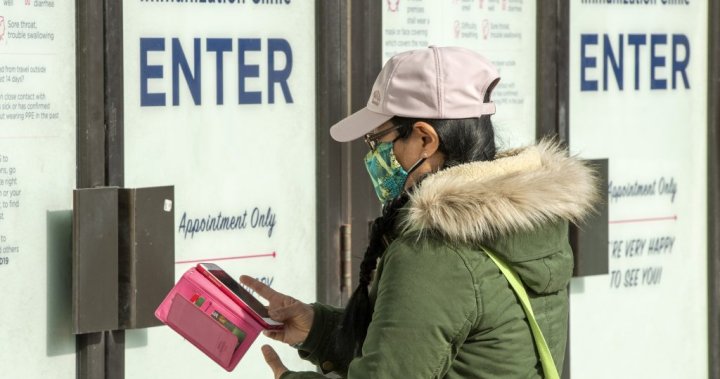 Persistent public health warnings that Canada could see a third wave of the COVID-19 pandemic appeared to bear fruit Thursday, as the country’s daily case count crept back up to early winter levels.

The 5,193 new coronavirus infections reported Thursday marked the first time since late January that over 5,000 cases were added in 24 hours.

The past week has seen two days where the daily count surpassed 4,000 cases for the first time since early February. Those higher counts have driven the seven-day average to 3,876 — a steady climb from the 2,900-case average seen just three weeks ago.

The national death toll now stands at 22,790, after 31 new deaths were reported Thursday.

The climb in cases comes as Canada hit a new milestone in its vaccination campaign. More than 4.5 million doses have been administered across the country, meaning over 10 per cent of the population aged 18 and up has received at least one dose.

“Amid increasing case counts, shifting severity trends, and a rising proportion of cases involving variants of concern in heavily-impacted areas of Canada, we need to remain vigilant,” she said.

Procurement Minister Anita Anand confirmed late Thursday that Canada is due to receive 3.2 million vaccine doses next week — including a delayed shipment of nearly 600,000 doses from Moderna that was due to arrive this weekend.

Next week will also see the arrival of the 1.5 million excess doses of AstraZeneca’s vaccine that the United States is giving to Canada as part of a sharing deal. Canada will have to repay the favour at a later date under the deal.

Those doses and others from AstraZeneca will see updated vial labels from Health Canada warning about possible blood clotting.

Dr. Supriya Sharma, chief medical adviser for the federal department, said three cases of blood clotting have been reported out of 300,000 Canadians who have received at least one dose, but none appeared to be linked to the vaccine.

Sharma said she agrees with European health authorities that the benefits of the vaccine outweigh any potential risks, and that all four vaccines approved for use in Canada are considered safe.

Cases rise across the provinces

Ontario reported its highest daily case count in months with 2,380 new infections and 17 more deaths, but officials noted that number was inflated because of a data catchup.

In Quebec, another 945 cases and four new deaths were added.

Atlantic Canada saw a combined 34 new infections, 30 of them in New Brunswick alone.

The province imposed new circuit-breaker measures Thursday in an effort to contain an outbreak of the infection in the province’s northwest, which has been the source of past outbreaks.

None of the Maritime provinces or Newfoundland and Labrador saw any new deaths.

In the Prairie provinces, Saskatchewan had 168 new cases and two deaths, while Manitoba reported 111 cases and one death.

British Columbia saw another 800 cases — the highest total in that province since early December — and five more deaths.

The territories only saw two new cases Thursday, both of them in Yukon. No other active cases remain there, while all cases in the Northwest Territories and Nunavut are resolved.

Worldwide, over 125.3 million infections of COVID-19 have been confirmed to date, while 2.75 million people have died, according to Johns Hopkins University.

The United States continues to lead the world in both cases and deaths, with over 30 million infections and more than 546,000 fatalities.

Several countries are seeing renewed outbreaks as winter gives way to spring — most alarmingly Brazil, which on Thursday surpassed a record 100,000 new cases in a single day.

—With files from the Canadian Press