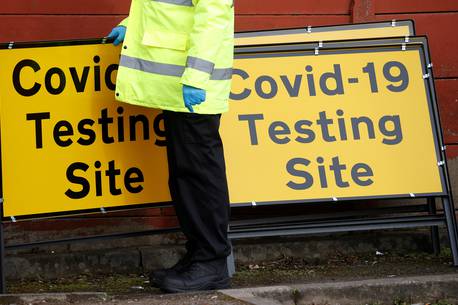 
LONDON (Reuters) – Britain’s medicine regulator has approved a 20-second COVID-19 test, the product’s distributor said on Friday as it launched a testing system it said could be used in airports, sports venues and businesses.

Rapid tests are seen as a key plank of Prime Minister Boris Johnson’s roadmap out of lockdown, but concerns have been expressed about the accuracy of existing lateral flow devices.

The Virolens test, which is made by British start-up iAbra and TT Electronics, has been trialled at Heathrow Airport, and uses swabs of saliva.

Histate, which is distributing the test, said it would launch with immediate effect following the approval in the UK by the Medicines and Healthcare products Regulatory Agency (MHRA), and was hoping for a further rollout in coming months.