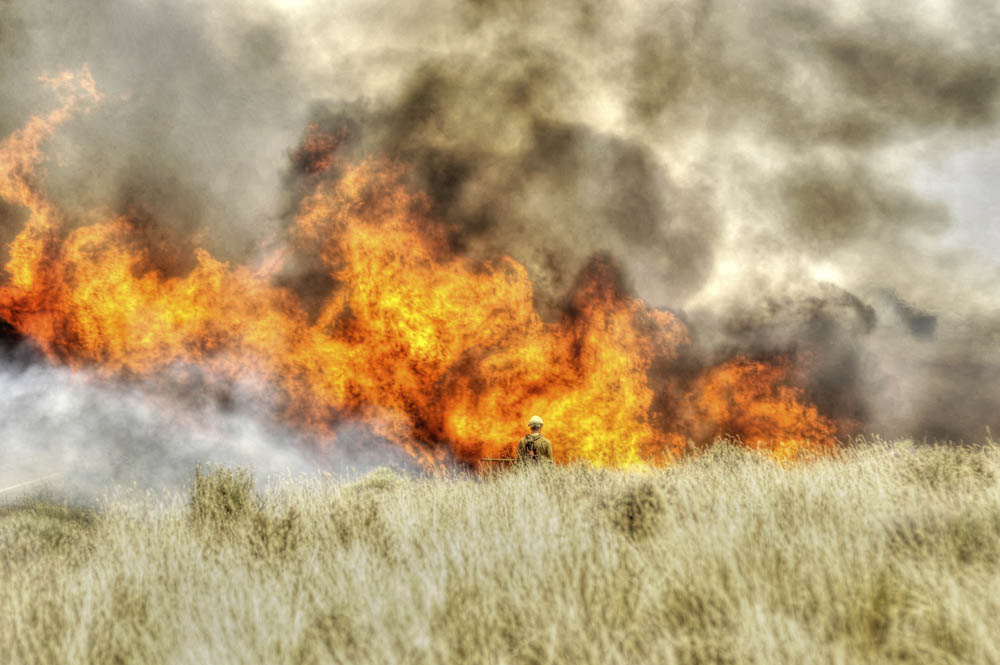 The perfect harmony of 20 souls. Each one with just a bit more sweat and grit as the one before. The simple gratification of achievement, thanks only to the will and power of heart, mind and muscle.

The Bureau of Land Management Fire hand crew program consists of 19 crews spread across BLM’s diverse landscape, from Fairbanks, Alaska to Bakersfield, California, to Worland, Wyoming, and to Jackson, Mississippi. Each location offers hand crew members endless opportunities for professional and personal growth along with direct access to some of the best recreation on the planet. The hand crew program consists of Interagency Hotshot Crews, or IHC, and the only federal hand crews specifically established to provide opportunities for our nation’s military veterans.

The 2021 fire year starts in Jackson, Mississippi with the Jackson Interagency Hotshots. Established in 1997, the crew is the BLM’s first and only wildland fire resource east of the Mississippi River, with a mission that includes providing employment opportunities for students at historic black colleges and universities. The Jackson IHC typically spends the first half of the fire year in the eastern states assisting interagency partners with prescribed fire and wildland fire suppression. The latter half of the year, Jackson makes the annual trek west to join western firefighting forces for the normal peak of the fire year.

Interagency Hotshot Crews are some of the nation’s most highly trained, experienced, and physically conditioned wildland firefighting resources. The first IHCs were established in southern California in the 1940s by the USDA Forest Service and have since multiplied to near 110 total crews between all federal agencies and three IHCs hosted by Utah and Alaska. All IHCs meet the requirements found in the Standards for Interagency Hotshot Crew Operations. BLM’s IHC program began in the late 70s with the Silver State IHC in Nevada. Silver State’s home base and fire station is tucked on the east slope of the Sierra Nevada mountain range, just south of Carson City. The Silver State fire station was built in 2012, purposely designed and constructed to house the diverse gear, equipment, and employees assigned to IHCs. Additional IHC hand crews with purpose-built IHC fire stations are the Diamond Mountain IHC in Susanville, California, Ruby Mountain IHC in Elko, Nevada, Craig IHC in Colorado, and Snake River IHC in Pocatello, Idaho.

In southern Arizona, BLM’s newest hand crew, the Aravaipa Veteran IHC, also begins the annual fire year in March. Joined by Lakeview Veterans IHC in Klamath Falls, Oregon, they comprise the only two hotshot crews that blend traditional IHC traditions with an environment and atmosphere for military veterans. The two hand crews meet all IHC standards but add a mission that strives to be comprised completely of veterans. Aravaipa’s home base is uniquely situated on the Fort Huachuca U.S. Army Installation in Sierra Vista, a location that benefits both the Army and the BLM.

The BLM Veteran hand crew program began in 2012 with the establishment of the Vegas Valley Hand Crew in Las Vegas, stationed in the picturesque Red Rocks National Conservation Area. Like all BLM hand crews, Vegas Valley spends the summer months crisscrossing the western states in a fleet of specially designed wildland fire vehicles. The fleet includes two pickup trucks and two custom built crew carriers, designed by the National Fire Equipment Program at NIFC. The crew carriers become the adhoc home for each crew member, each with a specific seat and window to thousands of miles of the country. The BLM Veteran hand crew program also includes the Folsom Lake Veteran Hand Crew in Placerville, California, Medford and Spokane Hand Crews in Oregon/Washington, Montana’s Billings Hand Crew, and Devils Canyon Hand Crew in Worland, Wyoming. While all hand crews meets the same National Wildfire Coordinating Group, or NWCG, standards, each one brings their own diverse skillsets, specialties, and traditions.

As the fire year trends towards the hottest months, the remaining BLM IHCs begin their fire year in early May. Joining the above mentioned IHCs are the Kern Valley IHC in Bakersfield, California, Vale IHC in Oregon, and Bonneville IHC in Salt Lake City, Utah. The two remaining BLM IHCs are jointly stationed in Fairbanks, Alaska. The Midnight Sun and Chena IHCs were established in 1985, both hosted by the BLM Alaska Fire Service. Both IHCs spend the first half of the fire year suppressing wildfires across the Last Frontier. These IHCs commonly travel via airplane and helicopter through the Alaskan tundra and spend up to 21 days in remote fire camps. Summer rains in Alaska see both IHCs fly to the “Lower 48” and retrieve crew vehicles at NIFC before joining summer firefighting efforts.

BLM hand crews find closure in October with seasonal employees embarking on well deserved time off and permanent employees starting the annual refurbishing of gear and equipment and starting planning and hiring for the next fire year. The application period for crew member positions begins in early fall, with most selections made in February. Permanent hand crew positions are rare and are advertised on usajobs.gov.

Whether a single fire year or an entire career, BLM’s hand crews provide much more than a modest paycheck. The real value lives in the lifelong memories, friendships, and sweat soaked footsteps across some of the most remote and stunning corners of our beautiful planet.

Note from Bill: The title of the article was edited to correctly indicate that not all of the BLM crews are Interagency Hotshot Crews.