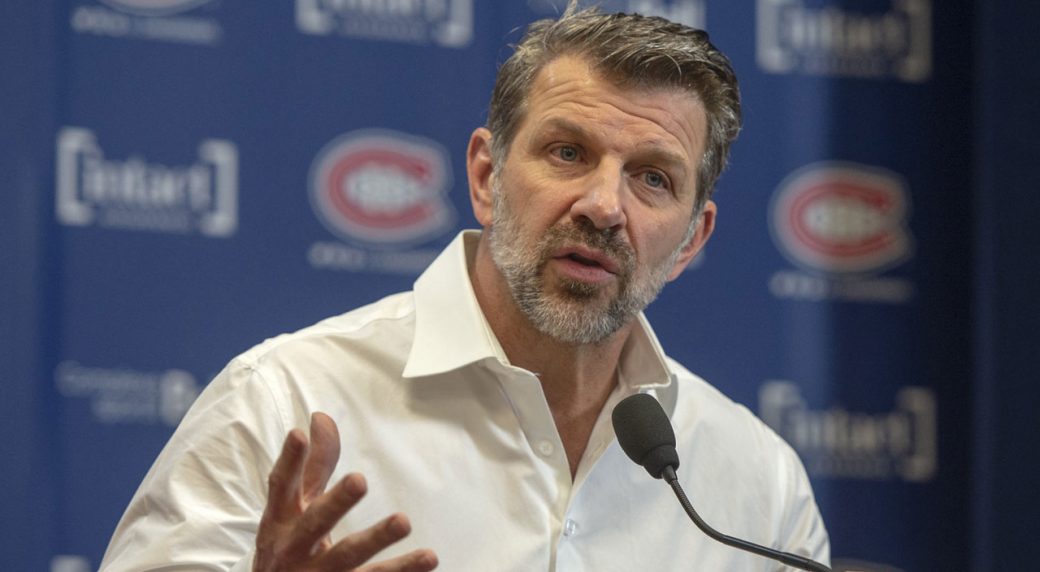 MONTREAL — Montreal Canadiens general manager Marc Bergevin addressed the media on Thursday for the first time since two of his players, Joel Armia and Jesperi Kotkaniemi, were placed on the NHL’s COVID protocol list and his team was forced to close its practice facility and cease all operations through this coming Sunday.

Bergevin spoke for close to 35 minutes and touched on several subjects, which we’ll break down in detail below.

Bergevin said the other player was placed in the NHL’s protocol because he was in close contact with the player who tested positive and that decisions to shut the Canadiens down for the week were made by the NHL, in consultation with public-safety authorities, out of caution and to do proper contact tracing.

“I think it’s the right decision,” Bergevin said, and it’s impossible to argue with that considering both players in protocol were on the ice with their teammates and the coaching staff earlier on Monday, hours before testing results indicated a positive.

Bergevin: “Since Jan. 3, every morning, everyone in our bubble, including players, coaching staff, trainers, equipment managers — all those people — we get tested every morning. At home, and on the road at the hotel. That’s in the morning before getting into the complex — we do it in the garage and then we go in. Tests results usually come back between 4:00 and 5:00 p.m.

“Also, families have been asked by public health authorities to be tested twice a week. Wives, children, everyone close to the players in our bubble. Public safety is involved in all our protocols, and they worked with the NHL on this. Also, all the border agents and people who work in our planes when we travel are all tested daily.

“So, on the whole, the NHL, and the NHLPA, Dr. Mulder, (head athletic therapist) Graham (Rynbend) and all our staff in Montreal should be commended (for keeping) all our personnel safe.”

On whether or not protocol was breached:

Bergevin: “I’m not ready to say protocols weren’t respected. There are people who are dying from this COVID virus, and it’s not because all them weren’t careful. The way the virus is spreading — we’re all educated, but this could’ve been for some mundane reason.

“I’m not at all disappointed with the player. We’re going to deal with this situation the best we can. But no one is guilty of anything in my eyes.”

On whether or not the Canadiens prepared for the possibility of a COVID shutdown:

Bergevin: “Early on, I guess we all (expected this). Especially when there was a lot of teams in the U.S. But again, in the North Division, it was pretty smooth until Monday. And again, if we really look at it, it’s one player that probably, as we speak today, that’s been affected. So one player in the whole division caused a shutdown. That unfortunately happened to us.”

On how the players were informed they were placed in protocol:

Bergevin: “I believe Dr. David Mulder called the players. I had a false positive myself a little while back and Dr. Mulder called me in the afternoon, and then I quarantined for 48 hours for two negative tests the next day. So we had a few false positives. Actually, it happened to me twice…. But we did re-test and (the player who tested positive) was positive.”

Our note: As we reported in February, Tyler Toffoli was one Canadiens player who had a false positive prior to the start of training camp.

Also, Bergevin said he was unable to comment on whether or not anyone on the Canadiens staff had tested positive or was exposed as a close contact and placed in protocol. Such information isn’t available on the daily list provided to media by the NHL.

On making up the four games that were postponed this week (three against the Edmonton Oilers and one against the Ottawa Senators):

Bergevin: “I had a discussion with the NHL yesterday. Everything is in place for these games to be played. It’s certain the schedule’s not ideal, but it’s just the same for some teams in the U.S. We’ll deal with it the best we can.

“The league will announce it as soon as we’re clear to return to practice. The league is managing all announcements with the schedule. I can say that they want to avoid, as much as possible, going into the buffer week, but it’s probable in our case that we’ll have to dip into it. But I’ll leave it to the league to announce that.

“It’s probable our season gets extended a bit, but not a full week. I saw the schedule yesterday, and we’re moving some games that will affect some other teams, aside from Edmonton and Montreal, who weren’t affected by this shutdown. There’s some games moving around so we can get in as many games as possible before the end of the season.

“There’s travel that goes into this, too. It’s pretty complex. I spent a good two hours on the phone with the league to best understand our calendar, which will be very condensed from here to the end of the season. It’s probably going to affect all Canadian teams.”

Our note: The Canadiens, who are 14-8-9 through 31 games, were initially scheduled to play their remaining 25 games over the 47 days between Mar. 22 and May 8. With Bergevin saying all four games will be made up, and that not all of them will take place after May 8, that means 25 games will have to be played in closer to 40 days.

“It’s not going to be easy,” said Bergevin, “but I can only control what I can control. The league and the players’ association made a decision to get those 56 games in 116 days with the possibility of missing games because of (COVID), so it’s something we’ll have to deal with. It’s not ideal, but we’ll make the best of it.”

The other teams in the North Division will have to make the best of how this affects them, as well. Without outright confirming it, moving certain games around based on travel for all teams is going to be necessary so the NHL avoids dipping too far into the week following the close of the regular season. The NHL wants the Stanley Cup Playoffs to start and end on time so that their broadcast schedule doesn’t interfere with the Tokyo Olympics, which will also be aired by their rights holders, so it’s paramount that the regular season doesn’t get extended a full week.

On positives and negatives of this unplanned week off:

Bergevin: “It’s a bit of both. On the positive side, it’s going to help our injured players who wouldn’t have been with us for the four games this week. But to not be able to skate for seven days isn’t ideal, either.

“There’s positive for our injured players, but we have to be in game shape and are affected that way.

“They can’t do much of anything, so we’re bringing them bikes and plans from our training camp they can follow every day to remain in the best physical condition possible.”

Our note: Toffoli, Montreal’s leading scorer, was slated to miss the three games against the Oilers this week before possibly returning from a lower-body injury on Sunday at the earliest. Provided he’s healthy enough to resume practising and playing if/when the Canadiens are re-activated Monday — and he doesn’t suffer any other injuries or illnesses before the end of the season — he’ll be available for all the games he would’ve missed.

Also, defenceman Ben Chiarot, who was scheduled to recover from right-hand surgery over a six-week period, now has a better chance of appearing in more games than he would’ve had this unscheduled break not occurred.

It goes without saying that every other player who’s been playing banged up — and Bergevin confirmed there were some — got a week of rest that can only help the healing process.

On the impact of this situation on trade deadline plans:

Bergevin: “It doesn’t really (affect it). We have no cap space, so it’s money in, money out, and expectation to do something at the deadline is probably very unlikely. So it doesn’t really affect anything for us.

“We do have conversations daily, but at the end of the day you go back always to the cap. Once you become a team against the cap, it’s money in, money out, unless you start giving up assets that you don’t (want to lose). I wouldn’t be expecting a lot near the deadline, anyway, regardless of the week off.

“Honestly, I’m not worried about it. I like our team. We’ll make the best of the situation of being in a condensed schedule the rest of the year, but I still like our team a lot.”

Our note: A lot to unpack here — especially with Bergevin holding strong to the idea he initially advanced, just over a week ago, that a lack of cap flexibility has completely tied his hands ahead of the deadline.

We understand why he’s lowering expectations on that front — it is complex for him to add to the Canadiens, and, if he can’t do it, he doesn’t want to be seen as failing to deliver on a promise. But we see myriad ways for him to navigate the team’s cap situation if he wants to.

But here’s something that does affect the money in, money out, quotient he keeps referring to: So long as the Canadiens are shut down, it makes it harder to move roster players to other teams.

Aside from the two players currently in protocol, the looming possibility others test positive over the coming days is why the team’s games this week were postponed to begin with. So a trade partner might not want to take on a player right now given those conditions.

As for Bergevin talking about “giving up assets” that you don’t want to, he was talking about that money in, money out, scenario, and referring to roster players, like he did on Mar. 16, when he said he didn’t have any “dead money” on his roster and wasn’t looking to trade a pick to incentivize a team to take a contract off his hands just to clear space.

But the Canadiens have regularly had players like Paul Byron, Artturi Lehkonen and Victor Mete sitting out of games this season, and that’s a lot of money that’s inactive. So, even though he likes his team “a lot,” the idea he’s unwilling to move anyone off of it is a stretch.

And hey, we probably wouldn’t be telling the media and fans we want to move players who are on the roster, while they’re still on the roster, either.