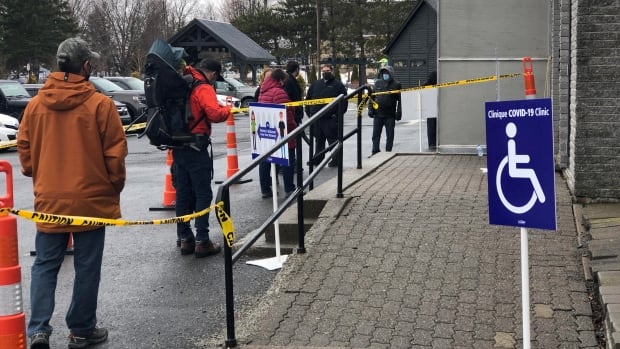 
Part of the Edmundston region, Zone 4, will return to the red phase of recovery for four days, effective 6 p.m. Thursday, as case counts and variant cases climb.

Dr. Jennifer Russell made the announcement at a live-streamed update on Thursday, where she also announced 30 new cases, the highest number reported in a single day in two months.

Of those 30 new cases, 24 are in the Edmundston region, Russell said.

“Just when it seemed things were getting better, the game has changed again, and the variants are driving that change,” Russell said. “The new strains are really daunting, they’re more infectious and it is difficult to keep cases contained.”

Edmundston and the upper Madawaska region are going back two phases in COVID-19 recovery, skipping over orange to the more severe restrictions of the red phase.

The rest of the region, including Grand Falls, Kedgwick, Saint-Quentin and Saint-Léonard, will remain in the yellow phase for now, along with the rest of the province.

The minimum four-day phase change, which Russell referred to as a “circuit-breaker,” will allow Public Health to review the results of contact tracing and mass testing underway in Zone 4 to determine how widespread the outbreak is.

“Depending on our findings, this measure could be extended for a longer period of time and it may need to be expanded to cover the rest of Zone 4,” Russell said.

Russell acknowledged the challenging timing of the circuit breaker, noting that it is “coming at a time when people are fatigued” and longing for return to normalcy.

“I know this is a hardship for the Edmundston area, which has already gone through our most stringent measures, including a full lockdown, but it is vital to public safety,” Russell said.

“I am appealing directly to the people of the Edmundston area to stay within their household bubble, wear a mask, maintain two metres of physical distance in public and follow all other public health measures.”

In the red phase, residents must remain within a single-household bubble, which may be extended to include caregivers, a family member who needs support or some other person who needs support.

There are 30 new cases of COVID-19 in the province, the highest number reported in a single day in two months.

In the Edmundston region, which has 24 of the 30 new cases, the variant is responsible for 62 per cent of the cases.

The number of cases in that region has doubled and then doubled again in less than two weeks, and there are confirmed cases of community spread, Dr. Jennifer Russell said Thursday.

Asked why the outbreak in the Edmundston region is proving so tenacious compared to outbreaks in other regions, Russell noted that “every outbreak is different,” but that the variant is a formidable factor.

Most outbreaks “start with a traveller, either work-related or otherwise,” she said.

In the outbreak in the Edmundston region, there are more public exposures and “transmission is happening in places where food is consumed.”

As well, she said, “people are tired, they’re COVID-fatigued, particularly in that zone, where people have been in lockdown in the last several months. It’s very exhausting. … So we do need to dig deep and we do need to work very hard together to get this outbreak under control.”

Health Minister Dorothy Shephard noted that the recent outbreak in the Miramichi region, Zone 7, happened at a time when the entire province was orange.

“So we had less contact and I’m sure that played a big role in containing it,” she said.

The new cases break down in this way:

The number of confirmed cases in New Brunswick is 1,546. Since Wednesday, three people have recovered, for a total of 1,426 recoveries.

There have been 30 deaths, three patients are in hospital, and the number of active cases is 89.  A total of 248,551 tests have been conducted, including 1,120 since Wednesday’s report.

Public Health has identified a potential public exposure to the coronavirus at the following location in Edmundston: