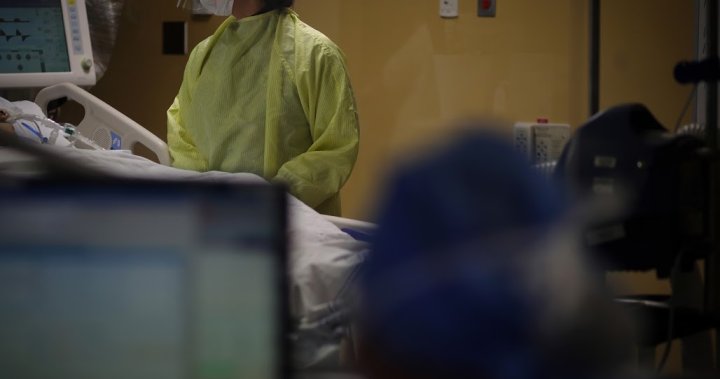 Inside Alberta intensive care units at the beginning of the pandemic, there was a feeling many of us can relate to from the early days of COVID-19 — fear.

“My first experience looking after someone with COVID, probably like most others, was certainly highlighted by some aspect of fear,” said Calgary ICU physician, Dr. Daniel Niven. “We didn’t know much about this virus.”

“There was a fear we would end up with a lot of people who were permanently attached to ventilators without an ability to get better,” recounted Edmonton ICU physician Dr. Darren Markland.

It was March 12 when the first COVID-19 patient entered the ICU in a Calgary hospital, according to Alberta Health Services.

Read more:
Alberta doctors reflect on COVID-19 one year later and what’s next

What unfolded in the following months changed frontline physicians forever.

“It’s brought the humanity of critical care to the forefront that I’ve never seen before,” Markland said. “It’s made me a better physician.”

It was a major learning curve, both about the virus itself and new ways of patient care.

What stood out for both physicians was the types of patients were unlike ever before – they were still awake and talking.

“We were so entangled with these people because nobody with COVID was in and out real quick,” Markland said. “We knew everything about them. We had real conversations before the tube went in.”

If — and for many, when — it got to the point of needing a ventilator to help them breathe, most patients were coherent enough to be told and understand what was happening next.

Niven remembers those moments, and especially “the fear on their face, when they are going to be put to sleep and put on a ventilator, because they don’t know what’s going to happen next.”

But what hit closest to home for him was the patients he was seeing enter the ICU that he would never expect: people between their 30s and 60s with families, still working full-time jobs.

“It was taking down the healthy — the people that wouldn’t otherwise end up in the ICU outside say if they got in a car crash,” Niven said.

“They wouldn’t normally see the inside of a hospital these people, and now they’re on a ventilator, fighting for their life.”

During the height of the second wave, he was calling multiple families every day to let them know their loved one was going to be intubated.

Every call left its mark.

Edmonton hospitals were hit the hardest during the second wave and pushed to the brink of their breaking points.

“We turned storage areas into patient care rooms. We took over a recovery room,” Markland recounted.

“We had barracks style intensive care units, like third world situations, where there were literally beds by beds by beds.”

Still, hospitals across the province were able to provide top-quality care.

“We never had to turn anyone away,” Niven said.

Both physicians have ingrained experiences with COVID-19 patients that couldn’t be saved, but there were also hard-fought battles they’ll remember forever.

“She had been through the wars. She had been unconscious, the virus had infected her brain. We had never seen these things before and we never knew they were survivable,” Markland said.

“Suddenly she woke up. Out of the blue. It was shocking. She’d been comatosed for weeks. The first words that came out of her mouth were ‘thank-you.’”

While the fight against COVID-19 still isn’t over, both physicians know the last year has left a permanent mark on their careers and their lives.

“Working within the ICU always highlights just how precious life is and how rapidly it can shift and that we shouldn’t take anything for granted at all ever,” Niven said.

“COVID indeed has magnified that.”