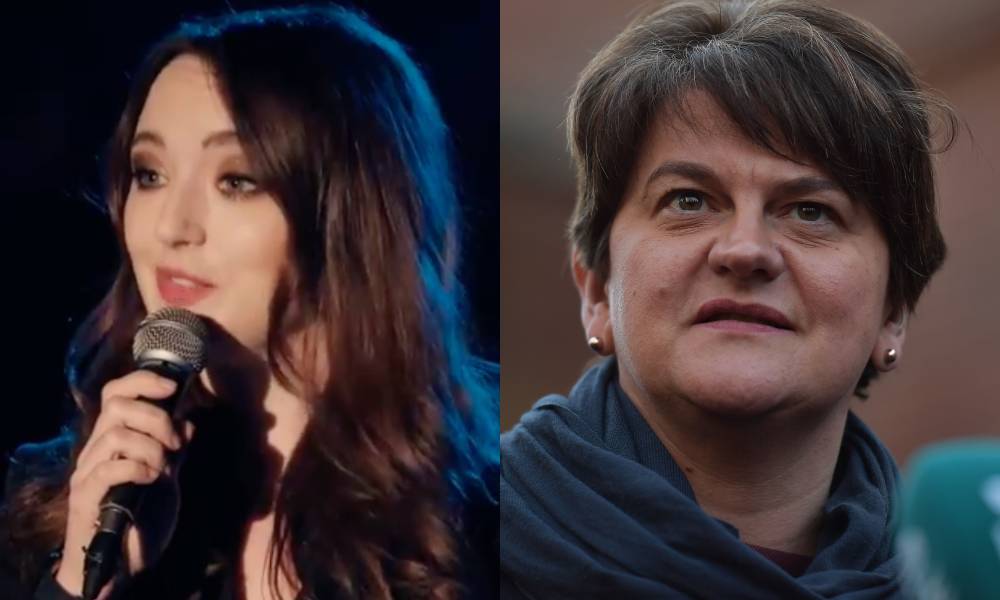 
The Democratic Unionist Party (DUP) is furious at a bisexual comedian Fern Brady for repeatedly joking that Arlene Foster is a closeted “butch lesbian“.

Fern Brady, a stand-up comedian from Scotland, jokingly accused the DUP‘s leader of being in denial about her sexuality during a BBC One special. During her new hour-long comedy special, Brady recalled when she wound up the DUP in 2018 by saying Foster looked like a “butch lesbian masquerading as a straight woman”.

According to the Belfast Telegraph‘s Sunday Life, Brady said in the new special, Power & Chaos, that the DUP is a party that hates “women and gay people”.

In her special, Fern Brady, who is bisexual, remembered how it was “dead exciting to have a scandal as a comedian” because she called the DUP leader a “butch lesbian” in 2018 during a separate BBC One special.

“Some of you know who they are – if you don’t, they’re these Northern Irish Christian politicians,” Brady said. “They hate women and gay people, even though their leader is a stone butch lesbian who doesn’t realise she’s gay yet. Her name is Arlene Foster.”

She added: “I did some material about Arlene Foster saying she was a homophobe because she was secretly gay, and I then performed it on a little known channel called BBC One.”

Sources close to the DUP said in 2028 that the BBC’s decision to air Brady’s “offensive onslaught” was disgraceful and warranted an apology from the comedian.

But in the new special, Fern Brady said she was “very excited” by the scandal even though her agent warned her to not get into an argument with the DUP. She claimed her agent said “they’ll shoot your knees off” and to “stay off the internet for one day”.

DUP MLA Christopher Stalford slammed Brady’s new special in a comment sent to the Sunday Life. Salford said: “Not all comedians will repeat the same material so often, but the content says more about her than it does about Arlene Foster.”

In a statement, the BBC said Brady’s special is an “acquired stand-up comedy performance” that was broadcast as part of the channel’s Festival of Funny season, “which showcased a range of content with different comedic styles”.

The BBC added: “In Power & Chaos, Fern, who has an established brand of humour, expresses her own opinions on a range of topics and experience.”

Speaking to PinkNews, Fern Brady said she is “amazed the DUP” have found time to watch her show “given how busy they are doing everything they can to restrict access to abortion following its decriminalisation over there”. She added: “Still, it bothers me that the Northern Irish press are trying to take what I said out of context because butch women get a hard time of it as it is so I thought very carefully about what I said in the hour long version of the show.

“I love butch and androgynous women, and as mentioned in the show, [I] have dated them in the past.”

But Brady said the thing she doesn’t love is the DUP’s “state sanctioned homophobia in Northern Ireland” and the fact they have “chosen to interpret me saying Arlene is gay as an insult speaks volumes about the restrictive gender roles for women in Northern Ireland”.

The special is currently available to stream on BBC iPlayer.

This copy has been edited to add in comment from Fern Brady.