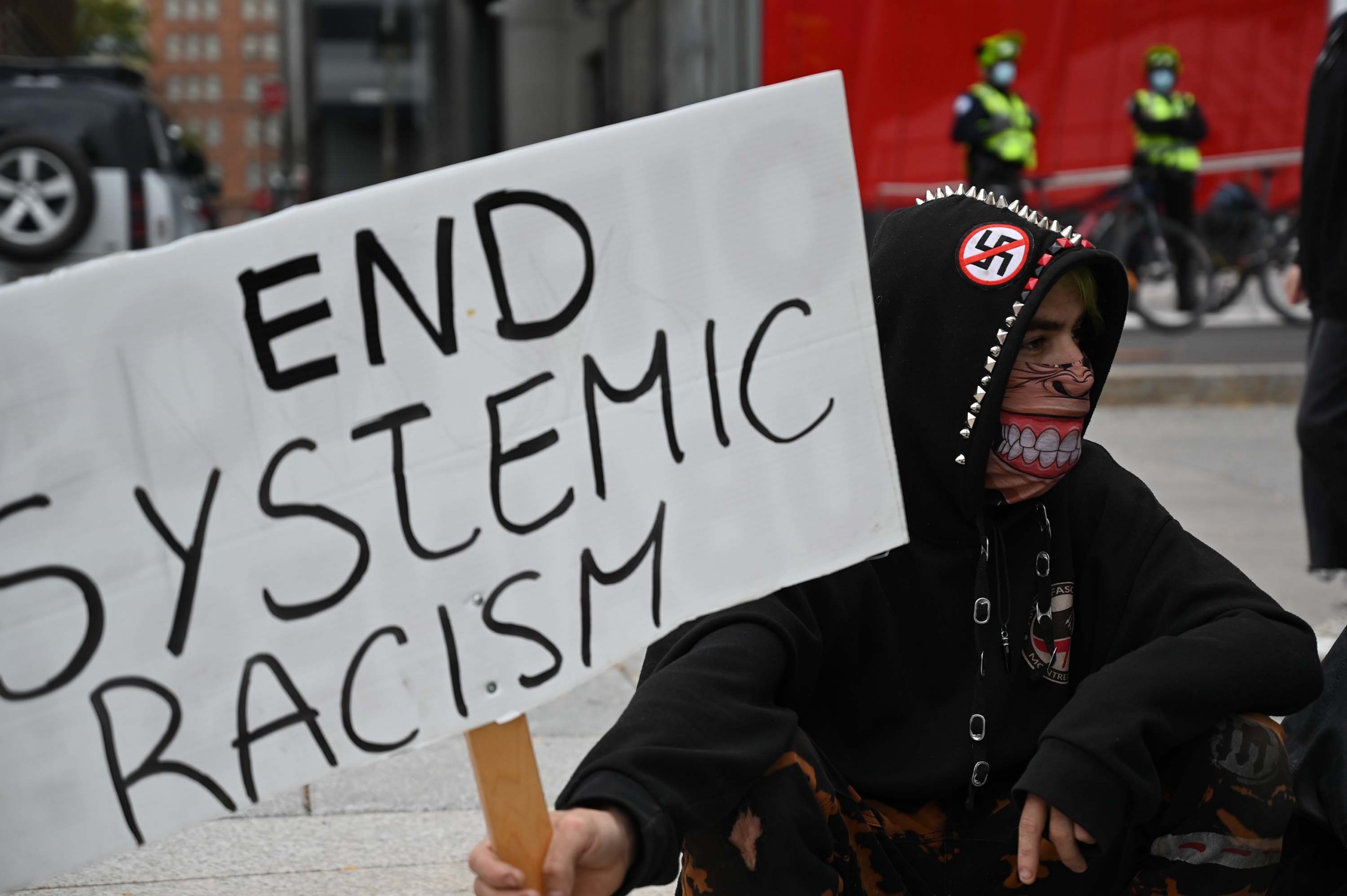 (CNN) — February marked the culmination of a nearly decade-long legal saga that raised national questions about how Canada treats Indigenous women. Cindy Gladue, a 36-year-old Canadian Cree-Métis mother of three, bled to death in a hotel bathtub almost a decade ago.

Bradley Barton, a former long-distance truck driver from Ontario, was on February 19 convicted for manslaughter — six years after he was acquitted of murder and manslaughter charges at his original trial.

The jury in the six-week re-trial in Edmonton, Alberta, had heard witness testimony that Gladue suffered an 11-centimeter wound to her vaginal wall while engaging in sexual acts with Barton in a hotel in the city in June 2011, according to CBC reports.

At trial, Barton testified he agreed to pay Gladue for sex and met her over two nights, and insisted it was consensual, according to the CBC. He said he did not realize she was injured, and was shocked when he found her dead the following morning.

But prosecutors argued that Gladue may have been too drunk to provide consent, and drew attention to inconsistencies in Barton’s testimony.

Barton’s lawyer Dino Bottos declined to comment on the verdict, but told CNN he is recommending an appeal for his client.

Though the agonizing way in which Gladue died is a source of much grief for her friends, family and community, the case has become a rallying cry for activists, raising questions about race and discrimination in Canada.

In 2015, a jury — described as “visibly White” in CBC news reports — acquitted Barton of first-degree murder and manslaughter charges, a verdict which triggered protests across the country and sparked a debate about how Canada’s justice system treats Indigenous women.

In 2017, prosecutors filed an appeal, arguing the trial judge had erred in some of his rulings and instructions to the jury. Canada’s Supreme Court agreed and ordered Barton be retried for manslaughter, noting that the country’s trial rules for dealing with sexual history weren’t followed.

Kaye said Gladue “wasn’t portrayed with human dignity, as a human being,” during the 2015 legal proceedings, which she said saw prosecutors bring a specimen of her preserved pelvic tissue into the courtroom as evidence of the fatal wound she suffered.

“They brought a portion of her body in as evidence and referred to a part of her body as a specimen — it violates rights in terms of how we treat people’s bodies after they’re deceased, and it certainly violates Indigenous protocols around caring for loved ones after they have passed,” Kaye said.

According to the Globe and Mail, images of Gladue’s vaginal tissue — which was brought into courtroom but hidden behind a screen — were projected on a screen for jurors to view. Presenting part of Gladue’s body at trial, Kaye said, ” was considered a very violent act.”

Gladue was also referred to as a “Native” or “prostitute” throughout the trial, according to the Supreme Court’s ruling in the case.

“She wasn’t all these labels, all these words that they said: She was a momma. People should have honored and respected her because she was a woman and she really loved her family,” Gladue’s cousin, Prairie Adaoui told CNN.

In 2019, Canada’s Supreme Court concluded that such language and “unrestricted reference to the victim’s sexual history” had “devastatingly prejudicial effects” on the outcome of the case, and did not dissuade “prejudicial and stereotypical assumptions about Indigenous women working in the sex trade.”

“All the stereotypes and stigma associated with how she was called and the names used for her, that really allowed racism and sexism to enter into the proceedings,” Kaye said.

For years, activists and Indigenous people in Canada have warned of a disproportionately high number of Indigenous women who have either gone missing or been killed across the country.

“The severe violence that Cindy Gladue suffered needs to be situated within a context [of] ongoing settler-colonial relations marked by gendered violence,” said Lise Gotell, professor of womens and gender studies at the University of Alberta.

“As an outcome of colonization, cultural dislocation, and poverty, Indigenous women and girls continue to face extreme forms of marginalization, including rates of violence that are many times those of other women,” Gotell said.

Though they represent about 4% of all women in Canada, Indigenous women made up nearly 28% of homicides perpetrated against women in 2019, while police estimated in 2015 that some 10% of the country’s missing women were Indigenous.

A 2014 report from Canada’s Royal Canadian Mounted Police identified 1,181 Indigenous women that had been killed or gone missing between 1980 and 2012.

Patty Hajdu, Canada’s then-minister of the status of women, said that the number could be as high as 4,000, according to the CBC.

Two years ago, a national enquiry described the thousands of Indigenous women and girls who have been killed or have vanished in Canada in the past decades as victims of a “Canadian genocide.” The report included testimonies from more than 1,400 family members and survivors, and 84 knowledge-keepers, experts and officials.

A national action plan was supposed to follow the report, but progress has been slow. Communities are still waiting for the plan, which was due in June last year.

Crown-Indigenous Relations Minister Carolyn Bennett told CBC News that further work and consultation should take place before a formal response to the report’s recommendations can be completed, and said the pandemic had affected the government’s timeline.

“How are you going to make all of these wrongs right? You need to be able to assist the women in whatever way they need help,” Lorraine Whitman, president of the Native Women’s Association of Canada told CNN.

Some activists point to other high-profile incidents involving Indigenous women that raised controversy over their treatment in Canada’s legal, healthcare and prison systems.

Kaye told CNN “there’s been a number of different cases where somebody coming into contact with the system as a victim is treated as though they are at fault,” she said.

In October, Canadian authorities said a public coroner’s inquest would be launched into the death of Joyce Echaquan, a 37-year-old mother of seven who died in a Quebec hospital. The CBC reported footage that Echaquan filmed before her death — appearing to allegedly show medical staff calling her “stupid” and “only good for sex” — triggered protests in Quebec City and Montreal. The inquiry is scheduled to begin in May 2021.

The province’s nursing body L’Ordre des infirmières et infirmiers du Québec in a statement denounced the “racism suffered” by Echaquan. In an October video statement, Luc Mathieu, President of the OIIQ said he had asked for a meeting with authorities in Manawan — the Indigenous community Echaquan was from — and is working out a set of disciplinary measures.

Lathieu said the nursing body would be reviewing training programs to establish if they are sufficiently preparing future nurses to deal with First Nations communities.

According to CBC News reports, a nurse and a patient attendant at the Joliette hospital were fired, and investigations by the local health authority have started.

CNN has contacted the region’s Integrated Center for Health and Social Services for comment.

And in 2015, a sex assault victim known by the pseudonym Angela Cardinal was taken into custody for five nights, transported to the courthouse in the same prisoner van as her attacker, and testified — while shackled — against the man who was ultimately convicted of assaulting her, according to CBC reports.

An independent investigator reviewing the case on behalf of Alberta’s Justice Minister later called the events “a complete breakdown of legal protections.”

The provincial court judge who agreed with federal prosecutors to have Cardinal remanded into custody was cleared of any judicial misconduct, according to CBC. The CBC also reported that the Alberta Judicial Council determined that the judge did not did not order that Cardinal be treated in such a way, and that there was no evidence that the complainant’s gender or aboriginal status affected his decisions.

“It is a form of racism that when we look at people, to say they are at fault for their situation when any other person, if a violent act occurred, they would expect to be treated with dignity and respect,” Kaye told CNN. “And yet we don’t see that occurring for Indigenous women.”

“We have to very actively address [it] to ensure that in our trials, we are not allowing prejudice against indigenous people enter into those spaces,” she added.

Institutional racism still pervades in the country’s legal systems and healthcare systems, Whitman said. In 2020, Indigenous women accounted for some 42% of Canada’s female prison population. “We need the government to listen and acknowledge there is systemic racism in these institutions,” she said.

Canada’s Prime Minister Justin Trudeau last year admitted that systemic racism, was an issue across the country “in all our institutions, including in all our police forces, including in the RCMP.”

“In many cases it’s not deliberate, it’s not intentional, it’s not aggressive, individual acts of racism, although those obviously exist. It is recognizing that the systems we have built over the past generations have not always treated people of racialized backgrounds, of Indigenous backgrounds, fairly through the very construction of the systems that exist,” he said.

RCMP Commissioner Brenda Lucki said that racism was present in the force, adding in a statement: “As many have said, I do know that systemic racism is part of every institution, the RCMP included. Throughout our history and today, we have not always treated racialized and Indigenous people fairly.” Lucki promised “thoughtful action” and consultation with Indigenous leaders and members of the RCMP in response.

‘She never had a voice’

Members of Gladue’s family say that although the verdict will allow them to start healing, 10 years after her violent death, the media coverage and legal treatment of Gladue’s case has failed to present her as a human being.

“We haven’t been able to heal as victims, because the trauma sits there,” Adaoui told CNN. “Cindy hasn’t been laid to rest yet, and I think that this is just the start to the healing journey.”

“She died a violent death and it took a decade for us to have some form of justice for her. She never had a voice, and we kept revisiting these two nights. But not only that, they didn’t look at her as a human. She was a human being and that’s the most important,” she added.

“She was a human, she was a mother, she was a daughter, she’s now a grandmother; she was a life giver,” Adaoui said. “She was just a beautiful person, and I think that part was not shown.”