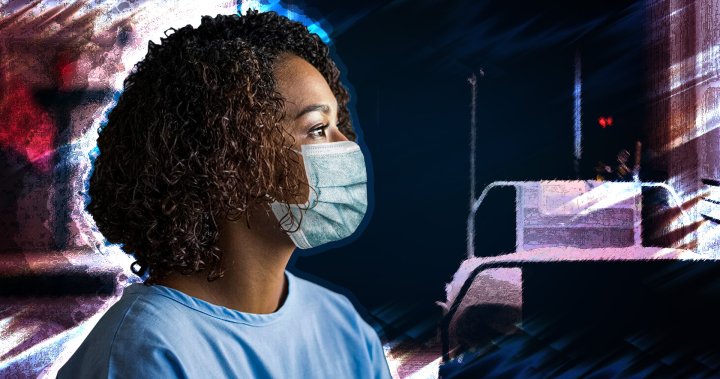 
Trigger warning: this story contains medical details and mention of trauma that may be disturbing to some readers.

Chantal Phillips still remembers the pain she experienced back in 2000.

At three years old, her mother took her to a Toronto doctor’s office for a urinary tract infection. She says, at the time, trying to urinate was too painful.

Phillips and her mom were out the door the same day without a remedy for the UTI.

“He just dismissed her, and said, you know, it’s not a problem, she’s only three years old,” Phillips says.

A couple of days later, Phillips says her pain intensified to the point she couldn’t sleep. Her mother brought her to the ER in the middle of the night.

“It actually proceeded to the inflammation of my kidneys, and so when I was taken to the hospital, the doctors almost called Children’s Aid Society, because they questioned my mother and why she didn’t bring me sooner.”

Phillips and her mom later found out that her UTI developed into pyelonephritis — a condition that can lead to kidney damage, and even death.

“It was so easy, very quick for them, to call CAS even though my mum had done everything right technically that a parent should do.”

Phillips says this speaks to a larger experience of Black individuals, not just in health care settings.

“I think this shows that these systems are interconnected. That you can, as a parent, as a Black person, do everything perfectly and yet still — both the individuals in this system, (and) the system itself — is against you,” Phillips says.

“I think overall, the Black community would say that we have been undertreated. We haven’t been receiving the care that we need.”

It’s now 21 years later, and Phillips is a medical student at the University of Toronto. She’s managing the Black COVID Resilience Health Promotion Project with the Black Health Alliance.

Phillips is working from the inside to challenge and reform that very system she says is dismissive toward Black people.

But she says the burden is too heavy to bear alone.

“Unfortunately, we live in a world where if it doesn’t affect you, you don’t think about it,” says Dr. Mojola Omole, a general surgeon and an executive board member with the Black Physicians’ Association of Ontario. “It won’t be a top of mind for them.”

According to Omole, some patients have told her they specifically seek care from her, because they feel understood and listened to.

“Sometimes they feel like their symptoms have been dismissed (by other providers), and that they’re not being given the same level of attention,” Omole says.

“It’s more like an intrinsic, implicit bias that (the providers) treat them differently, or they’d be like, ‘Oh, they’re not in that much pain,’ or, you know, ‘That person, they just cry a lot.”

Omole says a big example of this is how Black people living with sickle cell disease may be treated in the emergency room.

Individuals diagnosed with sickle cell make a lot of trips to the ER due to extreme pain, according to Omole. But when healthcare providers realize how many times the patient has been there, Omole says the individual is then labelled as “drug-seeking.”

“I’ve had friends, and their siblings, who have had this issue. For them, going to the emergency department is like the last resort, because of the way that they’ve been treated.”

Omole and Phillips’ stories are just a drop in a bucket of similar ordeals.

In 2018, Mississauga rapper John River sounded the alarm on a months-long ordeal he reportedly faced in five GTA hospitals. At the beginning, the rapper was complaining of shortness of breath and severe headaches. After a few visits, he said a doctor administered a spinal tap test that caused fluid to leak from his spine for months.

Rivers says, in the emergency room, he was always chalked off by healthcare staff as someone who was exaggerating his pain or looking for narcotics.

I’ve fallen through the cracks of our health care system. My family and friends have done everything they can, but they can’t do any more.

After what River says was 60 days of asking for — and not receiving — care, he took to Twitter. Only when the Twitter thread typed out by his mother went viral, did he land a doctor.

By that time, River could no longer control his bowel movements or see.

So, does this mean Black people are more likely to get dismissed when seeking care in Canada?

Omole and Phillips say a lack of Canadian statistics makes this question difficult to answer.

In the United States, health-care data based on race is tracked, so the country has a “robust” picture of its disparities. A quick look at race-based studies presents stark evidence that anti-Black racism in healthcare is common.

A 2005 book by the Institute of Medicine of the National Academies highlighted that Black people were less likely than their white counterparts to receive kidney transplants, appropriate cardiac medication, and high-quality basic clinical service. A more recent study found that Black people’s pain is less likely to be taken more seriously.

Moreover, A 2019 study by the National Psychological Association also found that white participants were less likely to recognize pain on a Black person’s face, and thus less likely to prescribe appropriate pain medication.

In Canada, race-based data in health-care is not mandatory to be collected, and so it usually isn’t.

According to Sarah Hobbs, this creates a large gap in understanding who needs care the most, and makes it harder to hold institutions accountable for not allocating adequate resources to racialized communities.

“It is vital that we need to be collecting race-based data all across the healthcare system,” says Hobbs, who is the CEO of the Alliance for Healthier Communities.

But if we don’t have the stats, does that mean that anti-black racism in healthcare doesn’t exist?

Omole, Phillips, and Hobbs all say just because the stats aren’t there, doesn’t mean it isn’t happening.

What they do know is that Canada does have decades-worth of a different kind of data not measured in numbers — the anecdotal evidence and lived experiences of Black individuals.

Though sometimes dismissed, all three experts say this kind of data is reliable, and should be believed.

In fact, not believing lived experiences, says Phillips, causes an “erasure of blackness.”

“Sometimes when you don’t know the person behind the data, then all they become is a number, a statistic,” Phillips says. “And then you fail to understand what these numbers mean on the ground.”

Lived experiences are also backed up by united calls for reform from experts across Canada.

For example, the 2020 Black Experiences in Healthcare Symposium  brought together Black healthcare providers, activists and allies who attested to the fact that the healthcare system “routinely fails entire communities.” A report from the symposium produced 16 recommendations for reform, the first of which is a commitment to collect race-based data, and to establish Black leaders and decision-makers in all levels of government.

Last year, Ontario, Manitoba, and Quebec announced they will begin to collect race-based healthcare data, but only pertaining to COVID-19.

“(The figures) are not surprising, but it doesn’t make it any less traumatic to see,” Phillips says.

Omole, Phillips and Hobbs say these numbers can definitely be attributed to systemic racism and its negative impact on social determinants of health such as food, housing, education, and access to opportunities.

Black people are over-represented among front-line workers, who bear the brunt of the COVID-19 pandemic.https://t.co/X2SCtH4imF

For instance, all three experts say a Black individual who is precariously housed, or who is facing an overcrowded living arrangement, may find it very difficult to self-isolate.

Given the fact that Black people are overrepresented in the number of frontline workers during COVID-19 — and they often do not have paid sick days — the individual may inadvertently contribute to the spread of COVID-19 to other vulnerable individuals in their communities.

“To me, when you tell someone they’re “essential”, yet you treat them as disposable — that is a crime,” says Phillips.

We’ve established that race-based data is important. Now what?

While Omole, Phillips, and Hobbs say we need both statistic and anecdotal evidence to paint a full-picture of anti-Black racism in healthcare, this merely scratches the surface.

For starters, healthcare providers, decision-makers, and managers should be obligated to unpack their own biases. That means fewer cuts, and more money, time, and resources should be allocated toward mandatory cultural safety training on institutionalized anti-Black racism, and how it negatively impacts other social determinants of health, leading to poor quality of life.

This also means healthcare providers should make an effort to see beyond the patient’s initial symptoms.

“We want to make sure that when we’re giving patients care, that we take into context their cultural background … that there is a respect in understanding and delivering healthcare in a context that the person is used to,” Omole says.

Omole, Phillips and Hobbs say Black people need to be included in decisions about treatment options, and to respect that may sometimes mean getting other family members involved.

“Instead of trying to put people in a box and attribute them to particular practices, engage with them in a way that is safest for them. You give them the opportunity to define what that safety looks like for them,” Phillips says.

“It’s obviously more work. It means you have to ask them questions about (what) their lived experience has been and how that applies to their care.”

But Phillips and Omole say this change should not just take place during one-on-one interactions between patients and physicians.

Instead, they say Black people should be able to co-design their own services and care at every level — meaning they should be represented in regional/provincial decision-making boards, in healthcare, and in all levels of government. It would also mean, according to Hobbs, that anti-Black racism should be declared a health emergency.

This still leaves us with the root cause of the problem: systemic racism that contributes to lower access to education, precarious housing, and low-income jobs.

Hundreds of activists and experts say this can only be dissected once non-Black individuals “take it personally” and actively become anti-racist. That means electing officials in municipal, provincial, and federal governments who will fight for Black lives, the activists say. It means providing financial and emotional supports to racialized communities. It means helping those more likely to fall through the cracks to secure an opportunity for education and a well-paying job. Activists say it can be nothing short of a multi-faceted approach.

As COVID-19 and its variants continues to ravage the country, thousands of Canadians are lining up to get inoculated.

However, Black communities say many of them are not so quick to trust a vaccine administered by a health system that they say has failed them for decades.