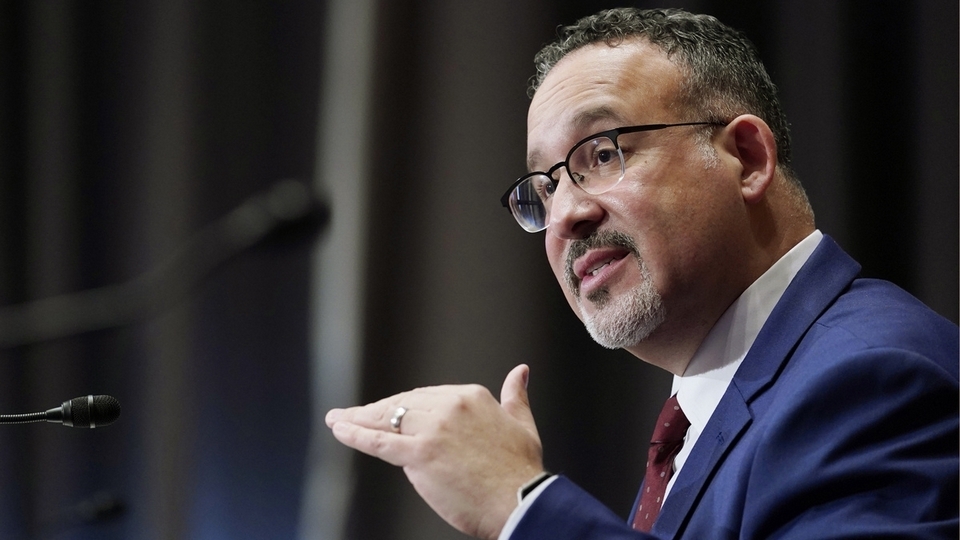 
WASHINGTON – The Senate confirmed Miguel Cardona to serve as education secretary Monday, vaulting the little-known Connecticut educator into the center of the national debate over how to reopen schools for face-to-face classes.

The Senate vote was a bipartisan 64-33 for Cardona, whose nomination moved through the Senate without any significant controversy. It marked a strong contrast to his immediate predecessor, Betsy DeVos, who needed the tiebreaking vote of Vice President Mike Pence to win confirmation.

“At this moment of crisis, Dr. Cardona is exactly the leader we need at the Department of Education,” said Sen. Patty Murray, D-Wash., chairwoman of the Senate Education Committee. “He has the experience, principles and perspective that we need in this critical role.”

Cardona, 45, was born into poverty to Puerto Rican parents before becoming a public school teacher, principal, administrator and, in 2019, Connecticut’s education commissioner.

As education secretary, he will be tasked with helping to reopen schools, addressing long-standing equity gaps exacerbated by the pandemic and managing the federal government’s $1.5 trillion student loan portfolio.

Cardona, who will be sworn into office Tuesday morning by Vice President Kamala Harris, is expected to immediately jump into the school reopening debate. On Wednesday, he will travel to his hometown of Meriden, Conn., with first lady Jill Biden for an event about school reopening.

He was chosen in part based on his track record in pushing Connecticut schools to reopen for in-person learning this fall. In his confirmation hearing before the Senate Education Committee, he said he approached the job with a spirit of cooperation.

“We were open and transparent with what we knew, and we made sure that we partnered with our health experts to put out very clear guidance early on to make sure that the mitigation strategies were very clear,” he said. “I look forward to, if I’m fortunate enough to serve as secretary of education, to bring that same mentality of partnership and clear communication to help recover our public education and reopen our schools.”

The Education Department has already published a handbook meant to help schools develop policies for operating in person, such as how to promote universal mask use and how to ensure distancing inside buildings. The agency is expected to publish a second volume soon addressing issues such as social and emotional needs of students, lost instructional time and stabilizing the educator workforce.

Cardona also promised to address questions of inequity in the nation’s education system, saying the pandemic has exacerbated long-standing concerns.

“These inequities will endure, and they will prevent the potential of this great country unless tackled head-on,” he said. “It would be my greatest privilege if confirmed to forge opportunity out of this crisis.”

During committee deliberations, Cardona drew some GOP criticism for his support of transgender girls who want to participate in girls sports. On Monday, some Republicans cited general opposition to the Biden agenda.

“I will again vote against Miguel Cardona, because he will be a champion for Biden’s union-focused progressive policies,” said Sen. Tim Scott, R-S.C., who serves on the education panel.

While Cardona’s experience is almost exclusively in K-12 education, much of the Education Department’s work is around higher education and the federal student loan program.

Cardona will face pressure from colleges and advocacy groups to expand eligibility for emergency grant funding in the federal rescue package. Under DeVos, the Education Department shut out undocumented and international students. The Biden administration is reviewing the policy, according to people familiar with the issue who were not authorized to speak publicly.

Much of Biden’s higher education agenda will require congressional action, including tuition-free public college and doubling the Pell Grant award for college students from low-income families. But advocacy groups expect Cardona to deliver on Biden’s promise to exercise tougher oversight of for-profit colleges through reinstating regulations scuttled by DeVos.

Cardona also will have to contend with Trump-era rules that limit loan forgiveness for defrauded borrowers and regulations on how schools investigate sexual harassment and assault.

Another hot-button issue is student debt cancellation. Liberal Democrats are calling for the cancellation of up to $50,000 in federal student debt per borrowers, far more than the $10,000 Biden supports. White House officials say the administration is reviewing whether the president can use executive authority to forgive some federal debt.

During his confirmation hearing, Cardona said he would use the tools available to him to provide borrowers with immediate relief.