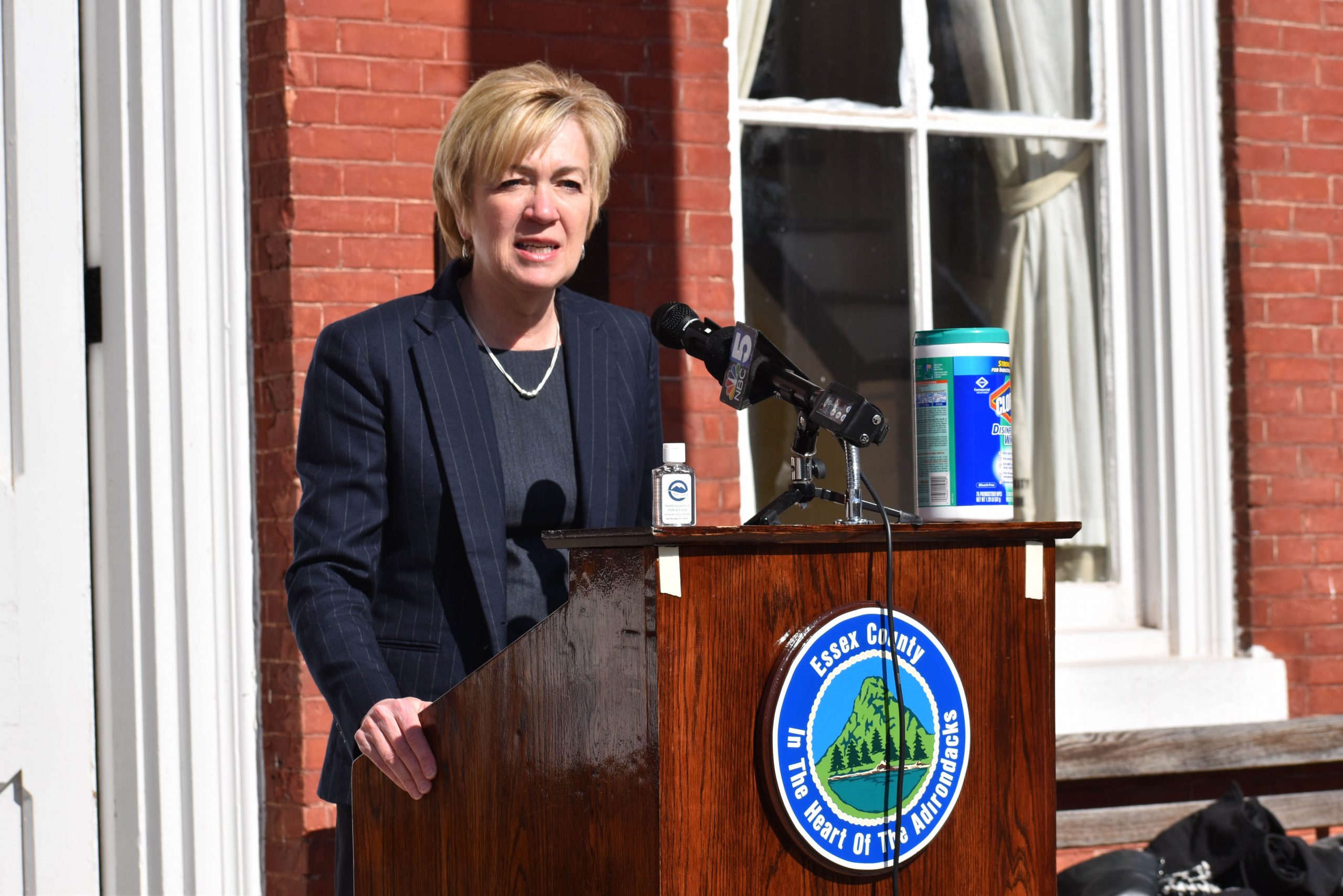 Sylvia Getman speaks at a coronavirus press conference in March 2020, before the U.S. Centers for Disease Control and Prevention recommended wearing masks to limit the spread of the virus.
(Enterprise photo — Elizabeth Izzo)

SARANAC LAKE — Sylvia Getman, the president and chief executive officer of Adirondack Health, announced plans to retire this summer on Monday, and a national search committee is being developed to find her successor as head of the region-wide health care system.

Getman’s tentative last day on the job is July 1, but Adirondack Health spokesperson Matt Scollin said because of the ongoing COVID-19 pandemic she has agreed to a flexible transition timeline if a new leader is not found by then.

Last week Getman sent a letter to Adirondack Health Board of Trustees Chair Susan Delehanty, telling the board of her retirement plans and acknowledging the continued uncertainty surrounding the COVID-19 pandemic.

“After more than 30 years in healthcare leadership and almost 20 as a hospital president and CEO, I have decided to retire, take a break to recharge, and find my next challenge and chapter,” Getman wrote. “Serving the organization, the community, and (this) board has been an honor, and I will cherish the memories forever.”

Delehanty said new information will be shared with the communities served by Adirondack Health in the weeks and months to come.

Getman was hired at Adirondack Health in July 2016, following a six-month selection process by a national search committee. She came here from Presque Isle, in northern Maine, where she had been president and CEO of the Aroostook Medical Center

“Getman would jokingly refer to her (Adirondack Health) staff from time to time as ‘southerners,’” Scollin wrote in a press release.

Getman has focused on rural health care throughout her career, balancing the financial constraints of a small hospital with its mission while considering ways the hospital could better deliver health care to the community.

“My passion is for rural health care,” Getman said when she was selected in 2016, succeeding Chandler Ralph.

Getman took over Adirondack Health at a busy time for the organization. It was preparing to build a new Health and Medical Fitness Center in Lake Placid and a new surgical services wing at Adirondack Medical Center in Saranac Lake, as well as selling the Uihlein nursing home. All these things were completed as planned.

When the coronavirus pandemic hit, her work behind the scenes became all the more crucial.

Facing a sea of unknowns in the early days of the pandemic, she and the team at Adirondack Health confronted supply shortages and adapted to ever-changing guidance and requirements from the state — all while the health network faced unprecedented financial shortfalls. One of its largest revenue generators, elective surgeries, were canceled.

“Those early weeks and months were pretty bleak most of the time,” Getman said at a meeting hosted by the Saranac Lake Area Chamber of Commerce last year. “We were making choices that in our careers we’ve never had to make.”

When one of her employees suggested the hospital collaborate with Trudeau Institute, a Saranac Lake-based biomedical research facility, Getman listened. The partnership that developed between the two institutions allowed the hospital to get its personal protective equipment sterilized, easing the burden of the supply shortages at the time. It also allowed the hospital to bump up its COVID-19 testing capabilities at a time when one part of the test kit, a chemical used to transport samples, was in short supply. The two nonprofit corporations also joined forces to establish a new laboratory at the hospital that, when fully outfitted, may have the capacity to process COVID tests from multiple counties, speeding up the turnaround time for local people.

This partnership earned both companies the distinction of being named Co-Businesses of the Year by the chamber of commerce last year.

As Getman has guided Adirondack Health through the ongoing coronavirus pandemic, she has been open about the challenges the hospital has faced and how it planned to navigate through them. In the last year alone, she has appeared at meetings hosted by local organizations including the chamber and the Regional Office of Sustainable Tourism, she has spoken at multiple press conferences, and she has done several interviews with local media, answering questions about the pandemic, the coronavirus and the hospital itself.

“Sylvia has been the right leader, in the right place, at the right time, and we are going to miss her,” Delehanty said in a press release. “Her commitment to the job and to those she leads, combined with her encyclopedic knowledge of the health care industry and stoic sense of humor will leave a lasting impression on the organization.”

“Sylvia has deftly navigated this institution through the completion of two major simultaneous construction projects, a facility-wide reaccreditation, the establishment of a joint replacement center of excellence, the tenures of three board chairs, and a year-long (and counting) pandemic,” Adirondack Health board member emeritus and former chair of the hospital board Jeannie Cross said. “We owe her a debt of gratitude and wish her the best of luck in reclaiming a full six to eight hours of sleep each night.”

Getman also serves on the board of the Adirondacks Accountable Care Organization, Adirondack Health Institute, Iroquois Healthcare Association and the Healthcare Trustees of New York State.