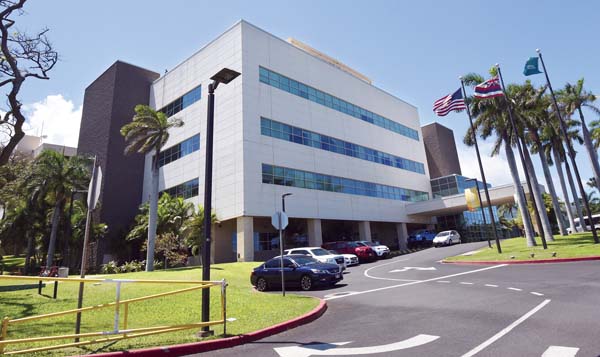 Maui Health and the union representing nearly 900 of its workers reached a tentative agreement early Friday morning after eight months of contract negotiations. The union said the new agreement included an increase in pay and addressed issues over nurse retention and wages for the lowest-paid employees. Union members must now meet, review and vote on the agreement.
The Maui News / MATTHEW THAYER photo

Maui Health System and the union representing nearly 900 of its workers have reached a tentative contract agreement that includes a raise in pay and addresses key concerns such as nurse retention, the union said.

Negotiations have been ongoing since June 15 and ended in two marathon sessions this week, according to news release from the United Nurses Associations of California/Union of Health Care Professionals.

“We really worked hard in the negotiating committee for the union,” Phil Velasco, co-chairman of the union’s Hawaii Chapter, told The Maui News on Friday evening. “We were very realistic in terms of our goals and what our limitations were. The federal mediator really helped facilitate the conclustion of this tentative agreement.”

Maui Health, the union and the federal mediator met twice this week, including one session that began Tuesday morning and ended at 2:45 a.m. Wednesday and another that started Thursday afternoon and ended just after 1 a.m. Friday.

“What we improved in the contract benefits staff and the community, and that’s something we were focusing on as well,” said Velasco, who’s also a nurse in case management at Maui Memorial Medical Center.

The contract was supposed to expire on June 30 but was extended through April while negotiations continued.

Last week, the union held a vehicle parade around the hospital that drew 149 cars packed with an estimated 500 union members, family and friends who made signs in support of workers and called for better pay in the face of a proposed zero percent increase during the first year of the new three-year contract.

The union had also been concerned about nurse retention, saying that the proposed contract offered incentives to new graduates but not to longtime nurses. They also sought to improve wages for lowest-paid employees, some of whom make less than $12 an hour, Velasco said earlier this month.

On Friday, Velasco said that he couldn’t go into detail about the tentative agreement since it still had to be sent to members. The union represents nearly 900 workers across Maui Memorial, Kula Hospital and Lanai Community Hospital, all operated by Maui Health. However, he said he could confirm that the agreement includes an increase in pay.

“We did make financial gains, but just being able to provide improved care for the community is very important,” Velasco said in the news release. “We addressed some significant issues, such as creation of a labor-management practice committee which gives nurses and staff input into patient care issues, such as acuity and care standards.”

Velasco explained that most hospitals have similar committees, and that “it may not be financial, but the effect it does have on staff and patients is huge.”

“We also won provisions to address the retention of experienced nurses and lift the wages of some of our lower-paid workers who contribute so much to patient care,” he added. “People tend to focus on nursing, but it takes everybody, including those not generally noticed, like admitting clerks, financial clerks, imaging techs and others, to provide the needed services that benefit our patients.”

The union said that the turnover rate among nurses at Maui Health was around 20 percent from 2018 to 2019, compared to the “standard acceptable turnover rate in health care” of about 9 to 12 percent.

A Maui Health spokeswoman also said Friday that the hospital operator could not share details since the agreement was tentative. However, Maui Health said in a statement that it “has been in good faith negotiations for several months with the United Nurses Associations of California/Union Health Care Professionals (UNHCEH) to renew the contract.”

Union members must now meet, review and vote on the agreement, according to the news release. Ratification meetings will likely be scheduled for next week. Once members agree, more details of the new contract can be announced, the union said.

“We thank the Maui community for their support, and I appreciate the hard work and dedication put in over the last eight months by our negotiating team, as well as the staff in our facilities who waited patiently these last eight months, and who came out in huge numbers last week for our vehicle parade around Maui Memorial, which helped show management how important this was to everyone and bring the negotiations to a successful resolution,” Velasco said.

* Colleen Uechi can be reached at cuechi@mauinews.com.

The state Judiciary has made its eReminder service, which provides text and email notifications of …

Road work, tree trimming and storm drain cleaning will cause lane closures across Maui next week, …

WAILUKU — Saying a defendant poses an “extreme danger to the community,” a deputy prosecutor asked Friday for …

Some homes in the Makena area will have their water shut off from about 8 a.m. to 3:30 p.m. Tuesday while a …