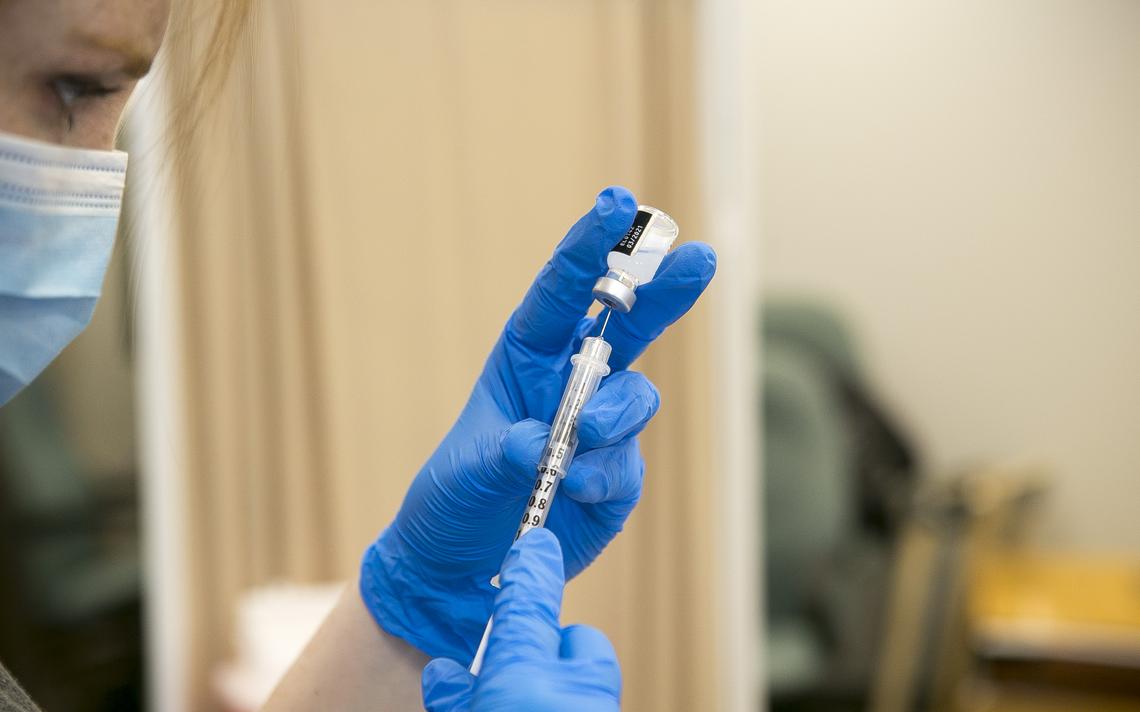 Dr. Joel Walz, the county’s health officer and a doctor at Altru Health System, said he plans to rescind his countywide mask mandate if the city’s coronavirus gauge indicates that the virus presents a “low” risk to people here for 14 consecutive days. Monday, March 1, was the seventh such day by Walz’s count, which he confirmed to the Herald means that he could rescind the order as soon as early next week. The 14th day would be Monday, March 8.

“I think masks have been very beneficial and have saved a lot of people,” Walz said Monday. “I just feel like we’ve reached the level where it doesn’t need to be a health officer’s order to wear them.”

The gauge to which Walz will be referring – the “Grand Forks Health Officer’s Dashboard,” which was put together by Grand Forks Public Health staffers last year – uses parameters set by the White House Coronavirus Task Force and the Harvard Global Health Institute. But Walz did not point to a similar recommendation for his 14-day plan.

“They might be out there. I’m not looking at one to make this decision,” he said. “We could have made it 15 days. I thought about going 28 days. There’s just a certain comfort level that I think you see in a two-week trend. I can put another order back out if it gets bad, but hoping we don’t go there.”

There has, however, been consistent pressure for him to rescind the mandate.

“There’s been enough, I think, members of the community that are against this and have wanted answers and a certain amount of transparency I think they feel hasn’t been there. It’s people that have voiced their opinions that they don’t want it, and I get it. I’m not just going to make a decision because you don’t want it, I’m basing it on some pretty good science, and we’ve got really good numbers now,” Walz said. “And compliance is dropping off, people are getting sick of wearing their masks, so there’s questions about why are we keeping it in place if people aren’t following it and it’s not being enforced, I’d say.”

Walz first ordered Grand Forks County residents to wear face coverings in November, but that order was quickly made redundant by a statewide mask mandate, and Grand Forks city leaders shelved their own mask mandate shortly thereafter, as well. As Gov. Doug Burgum allowed the statewide order to expire, Walz issued the current countywide one in its place.

Positivity rates, active cases, and other metrics used by public health officials to gauge the virus’ spread have pointed downward or leveled off for weeks, now, and the health officer’s dashboard’s assessment of the countywide risk posed by the virus has dropped from “severe” in November 2020 to “high” in December, “moderate” January and February of this year, and has been “low” since Feb. 22.

Beyond that, local efforts to vaccinate Grand Forks County residents against the virus have been steadily ramping up since December. Grand Forks Public Health staff reported that they doled out 2,021 doses of COVID-19 vaccine over the weekend at the Alerus Center. Of those, 786 were the all-important second dose, which means that those people are now presumably immune to the virus. Clinical trials indicate that the Pfizer version of the vaccine is about 95% effective, according to the U.S. Centers for Disease Control and Prevention, and the Moderna version is about 94% effective.

As of Monday afternoon, 8,034 county residents have been fully vaccinated. That’s 11.96% of the entire population and, more important, 19.9% of the way to the local health department’s herd immunity goal. Health department leaders hope to vaccinate a total of 60% of Grand Forks County residents, which means another 33,367 people who are old enough to receive the vaccine would need to receive both doses.

The health department announced Monday that childcare workers and K-12 education staff – teachers, bus drivers, administrators and so on – are now eligible to receive a vaccine through the city and Altru’s pooled vaccination program.