The health authority said in a release that the staff member at Charles S. Curtis Memorial Hospital had no known close contact with patients. All contacts “have been identified, quarantined and are being tested,” the release said.

Residents concerned about contact can avail of a drive-thru testing clinic starting Tuesday.

Earlier Monday, Newfoundland and Labrador reported two new cases of COVID-19, both in the Eastern Health region and contacts of previous cases, as more recover from the B117 variant.

Eleven people are in the hospital because of the virus, up from 10 on Sunday. Six of them are in intensive care.

Most of the province has now moved to Alert Level 4, meaning some non-essential businesses can open. The Avalon Peninsula remains in Alert Level 5 at least until mid-month.

“We are still on track to assess alert levels for all areas of the province on March 12,” Fitzgerald said at Monday’s briefing. “Before we can do that, we need to be confident that the risk of transmission is reduced,” for a period of ideally two weeks.

“There may be some up and down. One day it may be two [cases], another day it might be three, but for the most part you’re seeing a very low number of cases.” Those cases should also be epidemiologically linked, she said — a result of travel outside the province or close contact with another case. 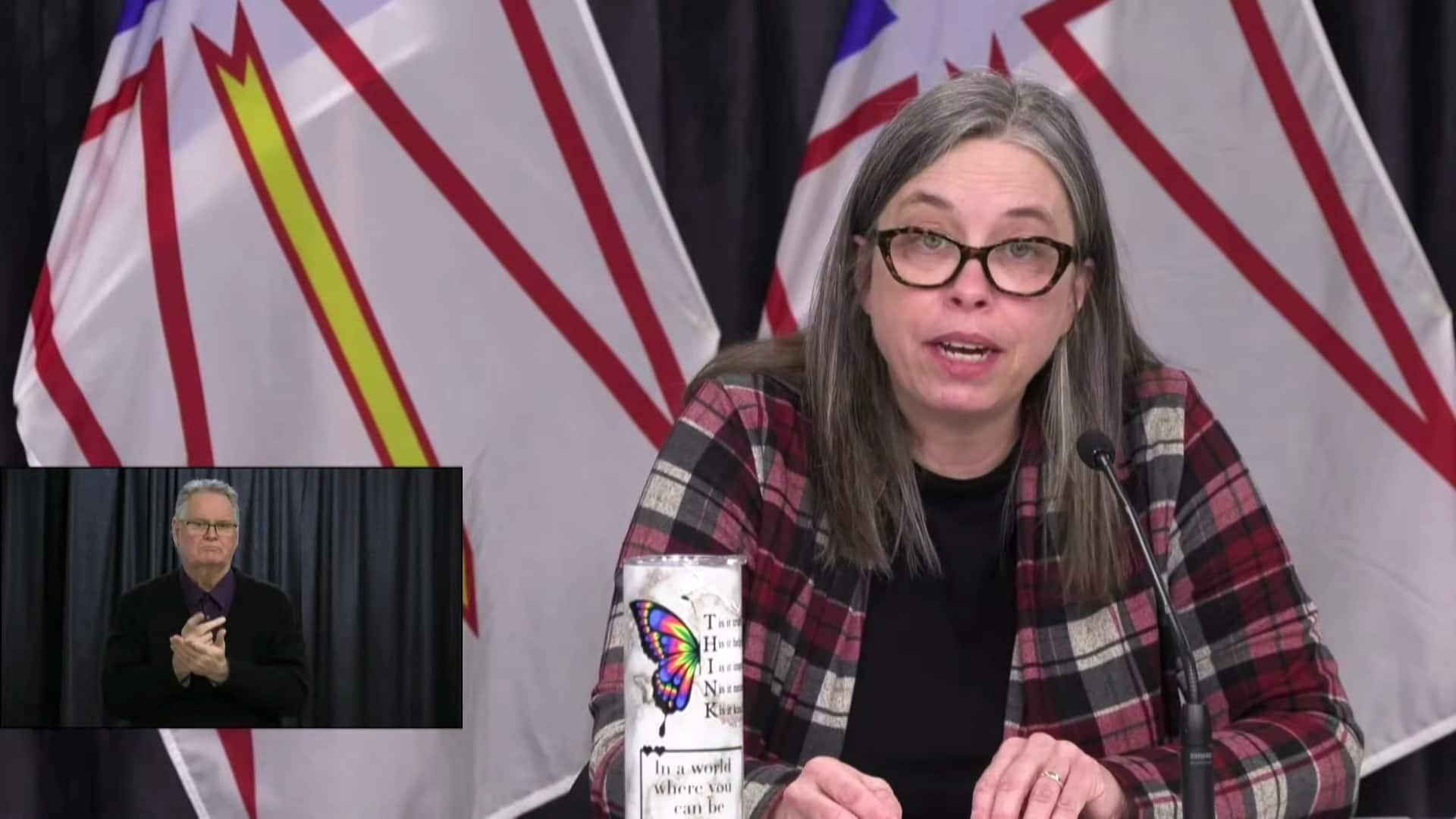 Dr. Janice Fitzgerald speaks at a briefing at Confederation Building 4:20

Testing of anyone with symptoms will also play a key factor, she said. “We’d like to see that our testing numbers are staying consistent, as well as our per cent positivity on those … numbers.”

Public health officials say residents of the Avalon should not be travelling to other parts of the province for anything other than essential reasons, such as for health issues.

“Essential travel here is the key,” said Health Minister John Haggie, noting he saw full highways over the weekend. “We need to follow the guidance and stick to the restrictions until … we have sufficient vaccine administered.”

The province now has 237 active cases.

A case announced Feb. 22 has also been ruled a false positive, leaving the province with 989 total cases. Of those, 565 are associated with the metro St. John’s variant outbreak that developed in February.

While not every sample is undergoing genetic testing, Fitzgerald said, 88 of the samples tested have been identified as the B117 strain.

“Everything we’ve sent up related to this recent cluster … has come back positive for B117,” she said. “Our assumption now is that anything that is coming from a community-related case is due to this variant.”

Officials stressed patience Monday, as the province waits for deliveries of three types of vaccine. Fitzgerald said Friday the province would soon move to Phase 2 of its immunization plan, and released its priority groups. Those include seniors and other vulnerable populations, such as people experiencing homelessness.

“We do have some vaccine on the horizon,” Haggie said, noting a delivery gap in February set the province behind schedule.

“We’re getting somewhere [in] the order of 6,000 doses per week of Pfizer. There will be some Moderna coming towards the beginning of next week. And then we await AstraZeneca with interest.”

The AstraZeneca-Oxford vaccine does not need to be frozen and can be transported in liquid form, Fitzgerald said. “That makes it much easier from a storage and shipping point of view,” she said.

The province has not yet received a delivery date for that product, she said, noting officials are waiting for federal direction.

People 70 or older can now pre-register for vaccination appointments. As of Sunday, 35,000 people had signed up.

Phase 1 of the province’s plan has not yet finished, however, leaving some health-care workers, including nurses and private respiratory therapists, unvaccinated. Premier Andrew Furey said he would address some of those concerns in a call Monday afternoon.

On Monday afternoon, the Department of Education lifted restrictions on regulated child-care facilities on the Avalon, saying in a media release that the move would relieve some of the burden on essential workers.

Those centres must operate at 50 per cent capacity, with preference given to parents who must leave their homes for work or families in which one or more parent is working from home, the department advised.

Education Minister Tom Osborne on Friday afternoon announced that while moving to Alert Level 4 will allow schools in those regions to reopen, not all students will return to class full time. Instead, some classes will be a mixture of in-person and individual at-home learning, to continue to adhere to public health requirements such as physical distancing.

With more new recoveries than new cases, the weekend saw the province’s active caseload continue to drop — from 287 on Friday to 271 on Saturday, and then down to 262 on Sunday. The seven-day average for new cases on Sunday also dropped to single digits — 8.9 — for the first time in more than two weeks, when the St. John’s metro area started seeing an outbreak of coronavirus variant B117.

Two new deaths were also reported on the weekend: one each on Saturday and Sunday, although public health officials noted that while the person whose death was announced Sunday had COVID-19, the disease was not the cause of death. Saturday’s death brings the province’s total number of deaths attributable to COVID-19 to six.

On Monday morning, the RCMP announced detachments in the province, apart from those on the Avalon Peninsula, would resume offering front-counter services such as criminal record checks and certificates of conduct.

As of Sunday afternoon, 112,632 — more than one-fifth of the province’s population — had been tested for COVID-19.