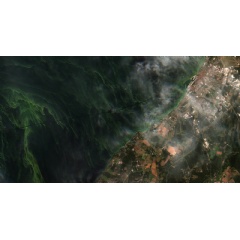 Few research centers take a wider lens to environmental science than the NERC Earth Observation Data Acquisition and Analysis Service (NEODAAS). Since the 1990s, the service, part of the United Kingdoms Natural Environment Research Council and overseen by the National Centre for Earth Observation (NCEO), has made the Earth observation data collected by hundreds of satellites freely available to researchers.

Backed by NVIDIA DGX systems as part of the Massive Graphical Processing Unit Cluster for Earth Observation (MAGEO), the NEODAAS team, based at the Plymouth Marine Laboratory in the U.K., supports cutting-edge research that opens up new ways of looking at Earth observation data with deep learning.

Thanks to NVIDIAs accelerated computing platform theyre now enabling the analysis of these troves of data faster than previously thought possible.

More than 10TB of Earth observation data is collected daily by sensors on more than 150 satellites orbiting the planet. Processing and analyzing this requires a massive amount of compute power.

To facilitate the application of deep learning to this data and gain valuable insights into the planets health, NEODAAS installed MAGEO. The large accelerated computing cluster consists of five NVIDIA DGX-1 systems, interconnected with NVIDIA Mellanox InfiniBand networking, and connected to 0.5PB of dedicated storage.

MAGEO was funded through a Natural Environment Research Council (NERC) transformational capital bid in 2019 to provide NEODAAS with the capability to apply deep learning and other algorithms benefiting from a large number of NVIDIA GPU cores, to Earth observation data. The cluster is operated as a service, with researchers able to make use of the compute power and the expertise of NEODAAS staff.

MAGEO offers an excellent opportunity to accelerate artificial intelligence and environmental intelligence research, said Stephen Goult, a data scientist at Plymouth Marine Laboratory. Its proximity to the NEODAAS archive allows for rapid prototyping and training using large amounts of satellite data, which will ultimately transform how we use and understand Earth observation data.

Using NVIDIA DGX systems, the NEODAAS team can perform types of analysis that otherwise wouldnt be feasible. It also enables the team to speed up their research dramatically  cutting training time from months to days.

NEODAAS additionally received funding to support the running of an NVIDIA Deep Learning Institute course, made available to members of the National Centre for Earth Observation in March, to foster AI development and training in the environmental and Earth observation fields.

The course was a great success  the participants left feeling knowledgeable and enthusiastic about applying AI to their research areas, said Goult. Conversations held during the course have resulted in the generation of several new projects leveraging AI to solve problems in the Earth observation space.

Using MAGEO, the NEODAAS team also collaborated on new approaches that have highlighted essential insights into the nature of Earth observation data.

One such success involves developing a new chlorophyll detector to help monitor concentrations of phytoplankton in the Earths oceans.

Microscopic phytoplankton are a source of food for a wide variety of ocean life, sustaining everything from tiny zooplankton to gigantic blue whales. But they also serve another purpose that is beneficial to the health of the planet.

Using MAGEO, NEODAAS worked with scientists to develop and train a neural network that has enabled a new form of chlorophyll detector for studying the abundance of phytoplankton on a global scale. The technique uses particulate beam-attenuation coefficient data, calculated by the loss of energy from a beam of light traveling in seawater due to the presence of suspended particles.

The technique means scientists can make accurate chlorophyll measurements much cheaper and faster, using significantly more data, than with the existing lab-based approach once considered the gold standard of high-performance liquid chromatography.

Thanks to the highly parallel environment and the computational performance driven by NVIDIA NVLink and the Tensor Core architecture in the NVIDIA DGX systems, what would have taken 16 months on a single GPU took 10 days on MAGEO, said Sebastian Graban, industrial placement student at Plymouth Marine Laboratory. The resulting trained neural network can predict chlorophyll to a very high accuracy and will provide experts with an improved, faster method of monitoring phytoplankton.

Learn more about NVIDIA DGX systems and how GPU computing is accelerating science.

This news content was configured by WebWire editorial staff. Linking is permitted.