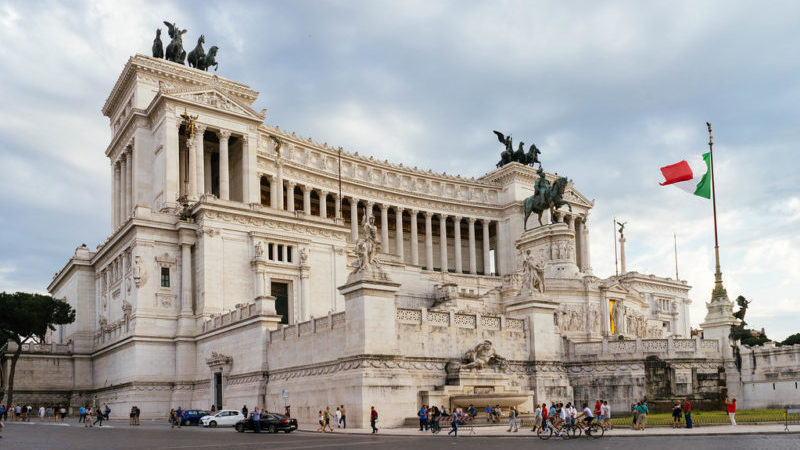 With a 9% fall in GDP and one of the highest Covid-19 death records in Europe, Italy has been one of the countries to have struggled the most in 2020. Now, more than 200bn euros are being offered to the country by the EU as part of an ambitious stimulus package. This represents a potentially unique occasion for the “Bel Paese” to reverse its crisis. The question being, is it actually possible?

The status of Italy has always been a puzzling case study for social scientists. Although it is the third richest country in the Eurozone, Italy has one of the most dysfunctional socio-economic systems.

Its pension system is obsolete, the PA is slow and inefficient, digitalisation is far from the EU average, the tax burden is incredibly high, and corruption is widespread. The pandemic’s impact has only worsened this situation, with a 9% decrease in GDP and a public debt increase to 158% of GDP.

However, the Italian government has been presented with an opportunity to reverse this decline, in the form of a 200bn euro lifeline, part of an EU stimulus package named “Next Generation EU”.  After several tense weeks of negotiations within the executive, a new draft of the Italian Recovery Plan has since been published in accordance.

The draft deals with six macro-areas of reforms and investments: Digitalization, Green Revolution, Infrastructures, Education, Inclusion and Health. The following sections provide an insight into two of these areas:

Health, because it was at the centre of international attention in 2020 and it is the sector within which Italy will need to prove its efficiency and credibility;

Education, because of the lack of structural reforms and the skill mismatch, which make Italian students unappealing to investors.

Italy has a higher life expectancy at birth than most of the OECD and EU countries, achieving this while keeping its healthcare spending to GDP at lower levels than the EU average. Although life expectancy might be determined by other factors (quality of food and water, lifestyle etc.), the provision of health care has undoubtedly played a role.

Nevertheless, Italy presents some critical structural problems which have become evident in the wake of the current pandemic. For example, hospitals have proven to be unable to react to significant shocks. This is due to several factors: the absence of an updated anti-pandemic plan, a low number of nurses and specific medical specialists  (anesthesiologists, pneumologists, infectious disease specialists etc.), obsolete technologies and weak performance on Telemedicine and home care. These, combined with an ageing population, created a deadly combination that put the Italian National and Regional Health Services under unsustainable pressure throughout the COVID-19 pandemic.

The Recovery Plan tries to address some of these issues. To reduce pressure on hospitals, 7 billion euros will be invested in home care and to strengthen healthcare provision outside of hospitals. New structures (known as “Community Hospitals”) will be built to deal with patients affected by diseases or injuries that do not require high levels of care. The plan is to build a total of 753 “Community Hospitals” by 2026.

Although these are undoubtedly ambitious objectives, which could have a significant impact if well implemented, they still seem to miss (or ignore) some crucial problems. Firstly, there is no indication of “who will do what”: The central government? The regional assemblies? The hospitals? The draft sounds more like a declaration of intents, without a clear plan on implementation and responsibilities.

Moreover, it does not address the two big elephants in the room. Firstly, the elimination of the barrier to direct employment in hospitals at the end of a Medicine course, which is depriving the healthcare system of young people.

Effectively, the block created for prospective medical students has had —and will have — an impact on the number of doctors and medical specialisations which are badly needed, as argued above. The biggest barrier to the presence of young people in hospitals is the prerequisite of a 2 to 6 years specialisation programme (often with low funding available) in order to be employed in a hospital. In other words, medical students cannot be trained on the job immediately after they obtain their degree as in the rest of Europe.

Secondly, there is no clear or detailed prevention plan, even though it has become the central concern of healthcare systems globally.

However, the most staggering element is the fact that at no point in the whole document, the words “corruption” or “Mafia” are ever mentioned. Notwithstanding the widespread corruption, the government seems to be turning a blind eye and pretending that none of the money invested will risk being wasted or used illegally.

While it is incredibly generous with its pension system, Italy has one of the lowest levels of investments in education in the EU and OECD. The effect of this is evident in international standardised tests, wherein Italian students are below average in both Mathematics and  Reading, particularly in the South. The education system is obsolete and still based on a design created under the Fascist regime. Too much focus is on notions and not enough on skills. Teachers are underpaid and underqualified and there is no meritocratic selection process, with age being the most relevant factor in assigning promotions.

The Recovery Plan tries to address the “skill mismatch” in Italy. The education system does not prepare students for work and accordingly investors are not particularly interested in Italy’s human capital — considering students’ lack of analytical, language, IT, and soft skills. For this reason, more than 5 billion euros will be invested to provide students with more curricular hours on STEM disciplines, digitalisation and foreign languages — with 1 billion euros alone being allocated towards increasing the number of hours that students spend at school.

Further funding will also be spent on research, tertiary education, digitalisation and teachers’ training, with the definition of a new selection system that will not merely test knowledge, but the approach to teaching, via a one-year traineeship.

In this case too, the reforms are undoubtedly ambitious, but there remains no clarity about how the plans will be implemented and who will be in charge of their supervision. Moreover, the plan seems to be lacking a clear vision.

It is true that STEM disciplines and foreign languages are essential in today’s world and need to be strengthened. However, if teaching and evaluation methods are still obsolete and focusing on the memorisation of information, rather than on the development of skills, then they are not going to tackle the backwardness of the Italian system. Yet, methods are never mentioned and there is no clear plan to train teachers on this matter or clarify specific forms of promotion or career advancement based on merit.

What to expect for the future?

The draft analysed so far is a product of the second Conte government. However, after a political crisis, a new executive of “National Unity” has been formed, with Mario Draghi — former ECB President — as its Prime Minister.

Since the “Next Generation EU” package was one of the factors that led to the end of the previous government, we can expect some fundamental changes. This is particularly true now, as the expectations and confidence of investors have risen due to the presence of a high-profile figure like Draghi.

One area to pay particular attention to is education, whose new minister is Patrizio Bianchi, an independent economist with expertise in the field.

Drawing from some of Bianchi’s publications, we can already predict some of his priorities. Attention to IT, STEM and foreign languages will certainly be a point of continuity, as well as more investments in Vocational and Technical schools.

He will try to “rejuvenate” curricula and create opportunities for professional experiences throughout high school. It is unclear whether he might challenge the use of traditional teaching methods. If he does, he needs to be aware of the difficulty in implementing a reform that relies on the goodwill of an ageing workforce to change its methods.

We can also expect more in terms of increasing schools’ autonomy in choosing their own educational offer and, maybe, their own teachers. This last point has been controversial in the past since it would challenge the privilege of older teachers in a system wherein age is more relevant than merit. Bianchi will find strong opposition from the teachers’ unions and it is too early to say whether he will be successful where others have failed.

On another note, Roberto Speranza kept his post as Health Minister in the new government. While this will probably represent an element of continuity in terms of how the reaction to COVID-19 will be handled, it does not necessarily represent a continuity in the development of the Recovery Plan. Draghi has clearly stated that Health will be at the forefront of his activity, meaning that he will play an active role in this field.

While most of the points analysed in the previous section will probably be confirmed, it will be necessary to look carefully at what will change in terms of governance, selection of personnel and faculties of medicine. This point falls into the purview of the Ministry for University and Research. It is not a coincidence that the new minister, Cristina Messa, is a researcher in medical science. It is not inconceivable also that she will play a role in the redefinition of some elements of the Recovery Plan on Health.

Sadly however, compared to Bianchi, her views are widely unknown. Therefore, it is too early to be able to predict what her contribution will be.

The Plan, as it is, has definitely many important shortcomings in terms of the definition of roles and allocation of responsibilities. The new Draghi government will certainly try to do its best to present a plan which can work for the EU Commission and for Italy. However, this will undoubtedly undermine the privileges of a public sector in which “meritocracy” is a myth and will be met with strong opposition by Trade Unions.

Only time will tell us if Draghi will win his battle.