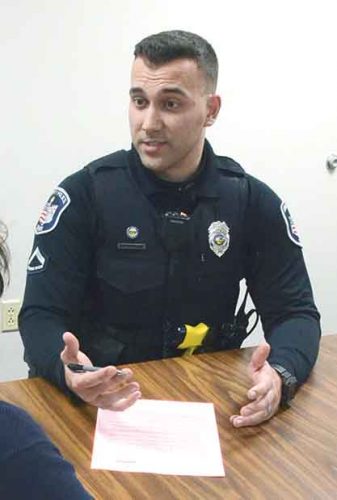 People in the throes of a mental health crisis often intersect with the criminal justice system, and while efforts are being made to increase the availability of mental health services, observers say existing systems are still lacking.

When people with mental health issues become involved with the justice system, it often can be during an episode involving crisis behavior. Or, the person has a repetitive history of similar behavior.

Sometimes the behavior itself is not criminal, but causes alarm in family members or bystanders who have few options but to call for police or an ambulance; other times, the behavior leads to criminal acts.

When police and people with mental illness interact, tactful de-escalation tactics can be a lifesaver, but sometimes the experiences unravel into chaos.

The exchanges can lead to a revolving door of being “pink slipped” for emergency hospitalization, homelessness, repeated police encounters, committing crimes just for a place to stay in jail, a whirlwind of judges and courtrooms, lapses in treatment — all with mental anguish for the individuals and their family members.

Police officers and mental health officials alike do not believe county jails are the appropriate place for people with mental illness to get treatment, but often no other option exists, with fewer treatment facilities available.

About 15 percent of all men booked into jails each year suffer from serious mental illness, and about 30 percent of women, according to the National Alliance on Mental Illness. And while in jail, 64 percent of inmates report mental health concerns, compared to about 20 percent of the general population, according to Ohio peace officer training manuals.

“By dismantling the mental illness treatment system, we have turned mental health crisis from a medical issue into a police matter,” said John Snook, the former executive director of the advocacy center. “This is patently unfair, illogical and is proving harmful both to the individual in desperate need of care and the officer who is forced to respond.”

“Although most officers do an amazing job dealing daily with mental health and developmentally disabled individuals, there is not a system in place to get most people past the immediate crisis,” he said.

Mason said he has watched treatment options dwindle during his career.

“From the time I was hired as a patrolman in Warren in 1992 until 1996, the Mahoning Valley was served by Woodside Receiving Hospital. This was a state-run psychiatric hospital that had a capacity of about 600 patients. Courts were able to send individuals exhibiting signs of mental illness to be evaluated for treatment. In the event that an individual was evaluated and determined by a physician to be mentally ill, Woodside Hospital was capable of long-term treatment,” Mason said.

John Myers Jr., director of planning and evaluation for the Trumbull County Mental Health and Recovery Board, said it’s only been in the last 15 years or so that attempts were made to integrate treatment for mental health or substance use disorders into the criminal justice system.

Even though officers are getting more training in de-escalation tactics than they were 10 years ago, “there are (fewer) agencies to provide services causing the facilities to become overwhelmed with the increasing number of patients,” Mason said. “And, since there is decreased long-term bed space, most patients are released for outpatient services. Without daily monitoring, many individuals become noncompliant with treatment and end up in a mental health crisis causing law enforcement interaction, which becomes an endless cycle.”

For example, Warren police reports show a steady escalation of one Youngstown man who kept refusing to leave a local hospital.

On Dec. 6, an ambulance took him to St. Joseph Warren Hospital because he was suicidal. Just an hour later, he was discharged and arrested on the warrants for not appearing in court on the charges he accrued after the first two incidents.

Then, on Jan. 14, police again were called to Trumbull Regional. Earlier in the evening, the man encountered police and told them “he wanted to go to the hospital for suicidal thoughts because it was cold outside and he is homeless.” But at the hospital, he was discharged again, hours later, and refused to leave. He became “angry and argumentative,” threatened staff and slammed a hospital computer, causing about $1,500 in property damage, the report states. He remains jailed, waiting to see if a grand jury will indict him on felony charges.

“Many times it is the same people over and over again. In my experience, the system is ill-equipped to handle the challenges of mental illness. And I think that goes from the jail, to prison, throughout the whole system,” said David Rouzzo, a defense attorney who often represents people who can’t afford to pay for their own representation.

“I’ve had clients that commit crimes in the winter so they won’t be homeless, a property crime, like throwing a brick through a window and sitting down on the sidewalk to wait to get picked up. It’s better than freezing to death. And many times they avoid the shelters because of the rules and the religious aspects,” Rouzzo said.

“Thirty years ago, homelessness wasn’t as big of a factor for severe mental illness because they ended up in hospitals for long periods of time. Now, they are living under a bridge instead of a state hospital,” said Myers, a mental health worker for 30 years and doctor in the field.

People need something in addition to hospitalization, jail and simple counseling, Myers said.

“The thing about deinstitutionalization is the hospitals … addressed basic needs. Now, there is the need for places to live, to get food, medical care. Those were things the state provided. The failures are visible — homeless camps and larger homeless populations,” Myers said.

While opportunities for interventions exist at different points in the criminal justice system, some of those services are dependent on what a specific court allows or has access to, others are not available because of the seriousness of the charges, or are inadequate, Rouzzo said.

And, it can be difficult to keep a person on medications that help, either because the meds are not available at certain points in the justice system, or because the person decides to stop taking them.

Robert Gaskins said the system is “frustrating” as the family member of someone with paranoid schizophrenia.

“The first time he had an episode, they gave him a shot to sedate him. He had to be put on a ventilator because of it. Others have been killed by the drug, given to people during manic episodes to subdue them,” Gaskins said.

Newton Falls police and Trumbull County Sheriff’s Office deputies were called in December when his family member was going door-to-door asking “to enter homes to warm” up. Gaskins wanted to take the family member to the hospital because he knew he was off his medications. The family member struck one of the officers, there was a struggle as he told the officers of an “implant in his ear” and other delusions.

Gaskins said police handled it well because even though he was acting erratically, police officers did not use lethal force or pull a gun. “They just tried to keep calm. They did the best they can,” Gaskins said.

When someone is experiencing a delusion, medications can contribute to the paranoia, he said. “It is very common to refuse to take the meds, because they think it is poison, or brainwashing them.”

When the family member stayed at the state hospital for a couple of weeks, Gaskins saw a pointed change, but it didn’t last long.

“What he needed at that point was some sort of maintenance treatment. He needed something more intense than a counselor, less intensive than a mental hospital, but there was no in-between,” Gaskins said.

After going to another family member’s home, he stopped taking the medications. “Now he is on the brink of homelessness. He needs help. I don’t think he will get it,” Gaskins said.

Retired Ohio Supreme Court Justice Evelyn Lundberg Stratton said one of the biggest obstacles is that people with mental illness can’t make rational decisions on their own, but still aren’t sick enough to be placed in a guardianship. The state failed to create a plan for services when state hospitals were closed, instead using the funds on other things, Stratton said.

The process of guardianship is a huge responsibility for those who undertake it.

“It’s like having another kid,” Gaskins said. And family members have to decide what types of boundaries to set in their lives for other loved ones, he said.

When a person is experiencing delusions, if they aren’t disrupting others, little can be done to force them into treatment, Gaskins said. Plus, they can often fool others into believing they are OK, he said.

“It would be great if there was some type of resource I could call. A mental health professional that isn’t the police, but has some type of special training. … there has to be something between police with guns and handcuffs, and trips to the emergency room, and scheduling an appointment with a counselor,” Gaskins said.

Today’s breaking news and more in your inbox