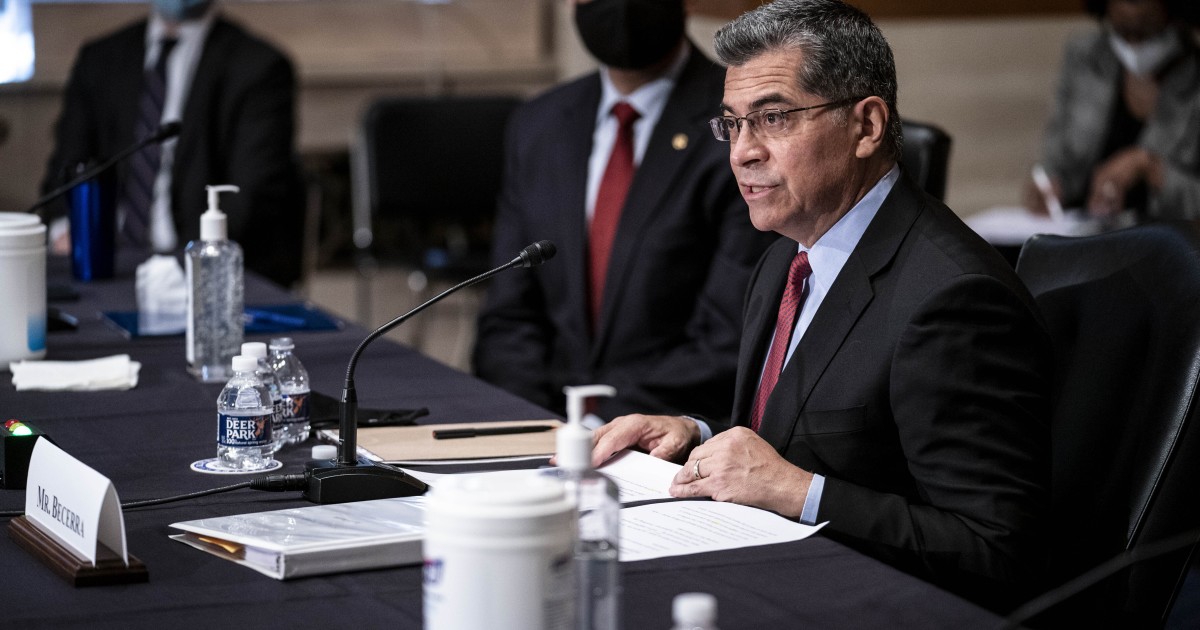 
Sen. Ted Cruz of Texas said something unusually ridiculous last week, even for a senator whose response to a disaster in his state was to head for Cancun.

Explaining why he plans to vote against confirming President Biden’s nominee for secretary of Health and Human Services, Cruz complained that Xavier Becerra “has no background in virology.”

“Would you hire me to remove your appendix?” the Harvard-trained lawyer asked.

The question doesn’t seem entirely relevant, but since he asked, my answer is: No. I wouldn’t trust Cruz with sharp objects under any circumstances.

But Becerra isn’t being nominated to perform surgery on members of Congress — or even to decipher viruses. He’s being hired to run federal health policy — to negotiate with other politicians, write regulations and manage a sprawling bureaucracy.

Measured against that job description, Becerra’s resume as a longtime U.S. congressman followed by a stint as attorney general of California looks pretty good.

He’s a highly competent politician and lawyer, not a doctor. And that’s what most Cabinet-level jobs need — not technical experts, no matter how brilliant they may be.

That’s especially true at this point in the COVID-19 pandemic. Our problem isn’t basic research; the virus has been sequenced and we have three fully approved vaccines. The challenge now is political and administrative: getting shots into people’s arms.

Becerra has “zero experience in anything related to healthcare,” Cruz claimed.

That was another strange statement. In fact, the California attorney general has years of experience in healthcare policy. He was a member of the House committee that wrote the Affordable Care Act, better known as Obamacare. During 24 years in the House, he also worked on dozens of other provisions aimed at controlling drug costs and improving Medicare and Medicaid.

While in Sacramento, Becerra led the coalition of state attorneys general that battled a Republican-led effort to repeal Obamacare. And in 2018 he sued Sutter Health, the Northern California hospital giant, for using monopoly power to keep prices artificially high; Sutter settled for $575 million.

That sounds like healthcare experience to me — and just the sort of expertise Biden will want when he gets to his top post-pandemic priority of expanding and adjusting Obamacare.

Cruz and other Republicans haven’t always demanded that the Health secretary be a scientist. President Trump’s last Health and Human Services boss, Alex Azar, was a lawyer and former lobbyist for a pharmaceutical firm.

Trump did put one doctor in charge of the Health Department, surgeon-turned-congressman Tom Price, but the experiment didn’t go well. Price was forced to resign after Politico revealed that he’d spent at least $340,000 in agency money on private jet flights.

In Becerra’s case, Republicans do have at least one substantive beef: They disagree with his position on abortion rights. He’s in favor; they’re opposed.

In 2017 Becerra sued the Trump administration over its decision to allow employers with “conscience-based objections” to omit contraceptive coverage from their employees’ health plans. The Little Sisters of the Poor, an order of nuns, later joined the suit on the president’s side.

That put Becerra in the middle of a legitimate, long-running, hot-button debate. He holds the standard Democratic position; his GOP critics want their voters to know that they are defending the conservative barricades.

But there’s also a newer phenomenon at work here: the increasingly raw politicization of almost every Cabinet nomination.

For more than 200 years, the Senate allowed presidents to name almost anyone they wanted to Cabinet seats, unless a nominee had problems with criminal charges, unpaid taxes or other misconduct. Nominees were often confirmed unanimously.

Since the 1980s, the boundaries have moved. Now Cabinet confirmations often play out as extensions of existing policy debates between the president’s party and the opposition.

When Barack Obama was president, most Republicans voted against his nominees for Labor, Tom Perez, and Education, John King Jr.

When Donald Trump became president, every Democrat voted against Betsy DeVos for Education and Price, the ill-fated doctor at Health and Human Services.

Now it’s Joe Biden’s turn. None of his nominees so far have sailed through without opposition. One GOP senator, Josh Hawley of Missouri, has voted against all 10 who have reached the Senate floor. Cruz has voted against nine of the 10 (he let Secretary of Defense Lloyd J. Austin III slip through). What those two senators have in common is that they are both potential presidential candidates — and they both tried to block the certification of electoral votes for Biden.

A few Republican institutionalists still vote the old way, letting the president have his choices. Sens. Susan Collins of Maine, Lisa Murkowski of Alaska, Rob Portman of Ohio and Mitt Romney of Utah have bucked their party to vote for all 10 of Biden’s nominees.

They haven’t joined the chorus complaining that Becerra isn’t a research scientist — a good sign for the nominee, who will likely be voted on next week.

They’re right. A president’s Cabinet doesn’t need a virologist at Health and Human Services, an architect at Housing and Urban Development, or a fighter pilot running the Pentagon.

The most accomplished Cabinet secretaries of recent years have been generalists, not specialists. George P. Shultz, who held four Cabinet-level jobs, was a business school professor — an expert in management. Leon E. Panetta, who held three, got his start as a member of the House of Representatives, like Becerra.

If Biden is nominating capable politicians and managers instead of surgeons, economists or astronauts, that’s a good thing.

An administration’s success often comes down to an art too many presidents neglect: managing the government well. Just ask Obama, whose biggest stumble was the botched rollout of his healthcare plan. He didn’t need a virologist; he needed better managers.