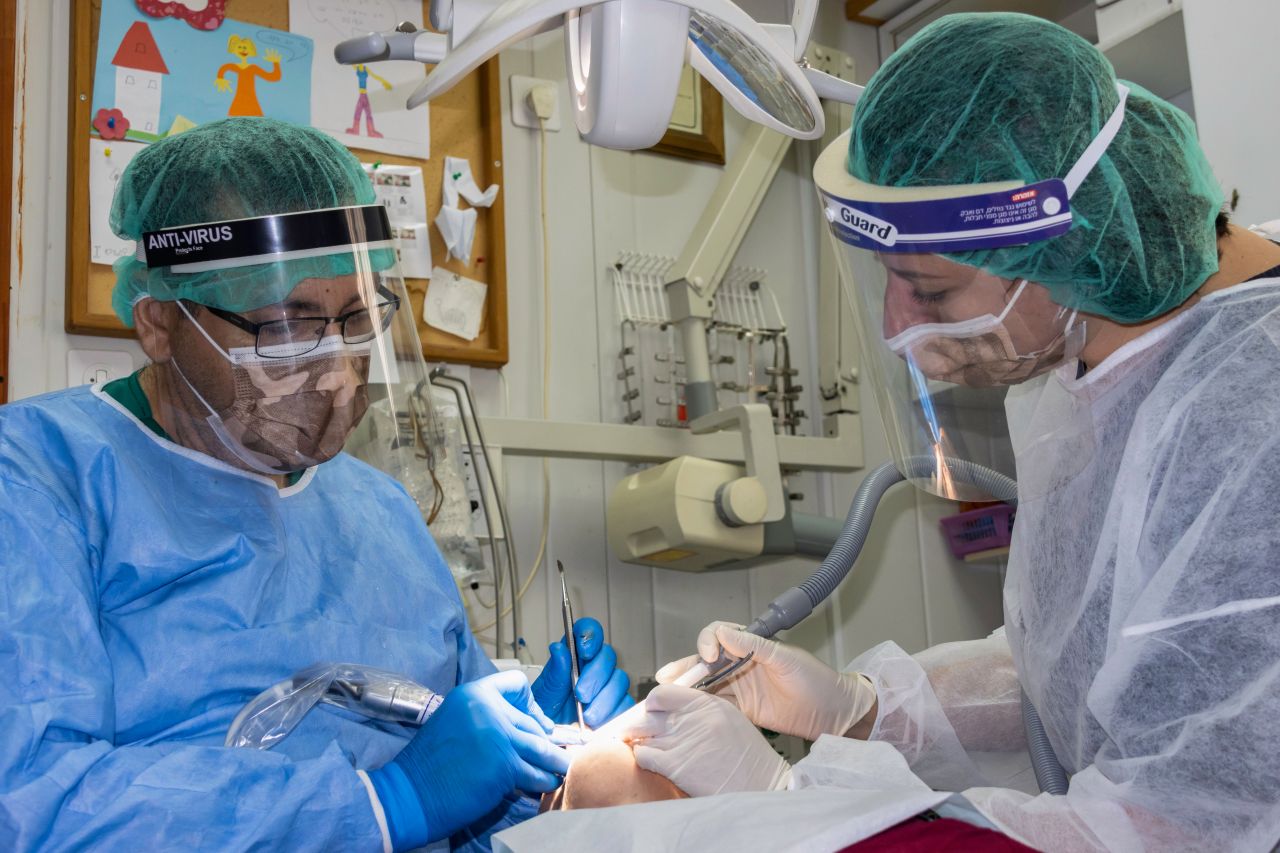 Many South Dakotans have put off needed dental care during the COVID-19 pandemic, increasing the risk of gum disease, tooth and bone loss or other serious health issues related to poor dental care, which can include heart attacks and diabetes.

Patients with acute dental problems and those who undergo routine dental care have stayed away from dental offices due to concerns they may be susceptible to COVID-19 during office visits.

Members of the state dental industry, who have taken a financial hit due to lack of appointments, say they may need a full year to overcome the backlog of delayed care resulting from COVID-19. Patients may face long wait times for appointments once the pandemic subsides.

“The ‘COVID hangover,’ that’s going to go on for a while,” said Paul Knecht, director of the South Dakota Dental Association. “We are finding ourselves needing to do a lot of extra work there.”

Research links poor dental health – especially periodontal gum disease – to heart attacks, diabetes, mental health issues and other serious problems. About 40 percent of American adults over age 30 have periodontitis, which is advanced gum disease that enables bacteria to build up in pockets around the teeth and which can then spread to the bloodstream, according to the Centers for Disease Control and Prevention.

Experts say those hit hardest by delaying needed dental care include those who have the most difficulty accessing dental care and those most vulnerable to future complications – children, the elderly, minorities and people with disabilities.

About one in five South Dakota residents currently admits they will delay dental treatment if they are not in pain, according to research by NextSmileDental.com. The website, which provides resources on dentures, recently conducted a survey of 4,500 patients. Parents who were surveyed also reported their children were eating more sugary treats. Children are especially vulnerable to tooth decay and other problems from delayed care.

Data collected by the South Dakota Dental Association has found that 15 percent of the state population will not return to a dental office until they have been vaccinated against COVID or until the pandemic subsides.

“There’s no social distancing in dentistry,” said Dr. Rick Fuchs, an orthodontist who serves patients in Mitchell and Huron. “You’re working 18 inches from an open mouth.”

South Dakota dentists are now operating at 70 to 80 percent of normal appointment schedules. For the year, they’re down 20 percent, although the pace of business has fluctuated greatly.

For dentists, as for everyone else, the COVID crisis brought a worry and constantly evolving guidelines and shifting priorities.

“I’ve been doing this for 22 years now,” Knecht said, “and I’ve never had a period of time like we did last spring. Every day, we would see the shift of what was on people’s minds.”

At St. Francis Mission Dental Clinic, on the Rosebud Indian Reservation in south-central South Dakota, the pandemic prompted the clinic to cancel all health events starting in March 2020, said manager and dental hygienist Marty Jones. Most of the patients served at the clinic are Native Americans. Jones said people often stop her in town to ask when services will return.

Her first dental health clinic will take place in March, 2021, and Jones is unsure if she is fully prepared for an onslaught of patients.

“I’m scared to even put it on the radio that they can call for an appointment,” she said. “We’re going to be overrun.”

Mitchell dental hygienist Patricia Aylward said residents at a nursing home she serves have received no dental care beyond emergency services for the past year.

“All of these people are elderly and have more dental needs than most,” she said, “and they have not been able to leave for dental treatment.” Dentists have also not been able to visit them.

“Initially, we knew so little about the virus itself,” Knecht said. At one point, dentists fiercely debated why masks were required but not eye protection. And then two weeks later national guidelines changed, requiring eye shields.

In mid-March, the American Dental Association advised all practices to shut down until early April. It later extended the shutdown. Exceptions were made for emergency cases, which mostly included cases involving serious pain.

The shutdown challenged communities in various ways. It differed for rural versus urban, for privately insured patients and those on Medicaid, and for offices serving the young or the elderly.

State dentists, Knecht said, worked through a variety of questions: Do you open the office to see one emergency? Or do you bundle emergencies until two days from now? Or do you send them to your colleague down the block?

Each practice was left to use its best judgment on what constituted an emergency, and many patients found themselves dealing with some level of pain for longer periods than usual.

As the shutdown dragged on, worries about COVID intensified, but delaying care caused some dental issues to progress to the point they needed additional treatment.

“We were doing a disservice to the public by delaying that care,” Knecht said.

Recognizing the potential for harm to patients, dentists scrambled in May to reopen safely. Dentists worked out ways of decontaminating surfaces and eliminating aerosolized particulates. Barriers to isolate airflow were erected, or schedules were changed to allow particulates to settle.

“It’s amazing all of the things some offices were able to do,” Knecht said.

Dentists were following all safety precautions, he said, but they were as aggressive as possible at serving patients.

By early summer, state dental offices had ramped up past normal workloads and were setting monthly in records in productivity, based on insurance billing records.

The number of COVID-19 cases in South Dakota began rising in September and peaked in October and November, and patient numbers plummeted. Through early December, Knecht said, office schedules fell to around 60 to 70 percent of normal.

“The ‘COVID hangover,’ that’s going to go on for a while … we are finding ourselves needing to do a lot of extra work there.” — Paul Knecht, director of the South Dakota Dental Association

In January, office schedules began returning to what they had been in July and August, Knecht said, although it varied by practice makeup and location.

The pandemic made it harder for many dental patients to stay on track in the sometimes elongated process of managing dental problems.

“They take the big step to get healthy and get fully on board,” Hart said, only to find themselves back where they started.

Hart said business at her office began ramping up again in November. Even though state COVID numbers remained high, she said, “people were not all that afraid.”

The increase in patients could have been attributed to a rise in younger patients or among people who already had COVID-19 and had recovered.

Most recently, the rollout of vaccines has slowed office schedules again. For some patients, Hart said, the attitude has been, “I’m just going to wait,” until they get one or two vaccine shots.

Not all offices dealing in oral care have experienced the same pattern. State orthodontic offices have seen little to no fluctuation throughout the year. Orthodontists work primarily to fit braces and straighten teeth, generally on youth.

“Once you begin the process, you’re forced to continue,” said Fuchs, the orthodontist.

Fuchs said he witnessed no change in desire or demand among children needing braces, although the pandemic brought changes to his practice. Office staff became more aware of taking all proper precautions, Fuchs said.

Across the state, the office closures and slowed schedules created concerns over dental practice finances as well as for patient safety. Federal COVID-19 emergency assistance helped, Knecht said, but it will be harder to get full compensation for the year’s overall decrease in productivity. The effects could become apparent during the second quarter of this year, he said.

Even where patient demand remained high, office efficiency slowed for decontamination and other necessary precautions. Sometimes it was as simple as a dentist working with someone other than their usual assistant.

“We kept all of our key members employed,” said Hart. “We made a plan at the start of it.”

“We do anticipate at some point we will be busier,” she said. “We’ve put the groundwork in place to be able to rock and roll when it’s time. The team is mentally prepared for it. Overall, we want to help people.”

Dental offices must contend with lost dental insurance among regular patients who lost jobs due to the pandemic. Hart said a patient in her office struggles to eat because of a broken bridge.

“They’re now living on one income,” Hart said. “There are things like that we probably aren’t even aware are happening.”

On the other hand, she added, some people have used stimulus funds to address longtime problems. “Some come in ready to do major work,” Hart said.

There will be no quick return to normal at St. Francis Mission clinic, which receives assistance from benefactors and grants but also relies on patient reimbursement.

To reopen safely amid the pandemic, the clinic had to construct a new entrance and purchase a washer and dryer to handle laundry on site. Jones hopes to create partitions for dressing rooms and install lockers for the visiting providers.

Finances also will be an issue for dentists who serve Medicaid patients. In South Dakota, the state and federally funded program for the impoverished caps dental care at $1,000 per year, Knecht said. Dentists can appeal to have the cap lifted in certain circumstances, and dentists are appealing to raise that cap for everyone for the remainder of this year, because delayed care has resulted in greater needs.

One dentist involved with Special Olympics told Knecht it will require a lot of work to catch up among that population. The same will likely be true for children served by Head Start or other advocacy groups.

But not every Medicaid provider faces the same financial struggles.

The clinic was already using advanced infection control practices prior to COVID-19, Tubandt said. It laundered uniforms at the facility. Staff wore Level 3 surgical masks. Masks were changed between patients, and staff wore long sleeves. Only a few adjustments were necessary to reopen.

For 13 weeks, Tubandt said, the clinic treated only those with severe pain or swelling, and it eventually reopened for routine care.

Falls has remained busy since August. It never experienced the autumn slowing seen by other practices. She speculates it may result from the increasing numbers of patients served by Medicaid.

“We’re having some people come in that we haven’t seen for two or three years,” Tubandt said.

Going forward, scheduling issues will be a major problem for nearly every dental office in South Dakota. Even if COVID-19 were to disappear tomorrow, offices would still have to work through the gaps and clusters caused by the wild fluctuations.

Dentistry typically works on a six-month schedule, and for most patients, those routines have been set aside.

Many patients have skipped one or even two checkups, and reestablishing a routine will be problematic.

“Our offices are working on that recall schedule right now,” Knecht said. “How to reappoint all of those folks in a timely way and get that back into their routine.”