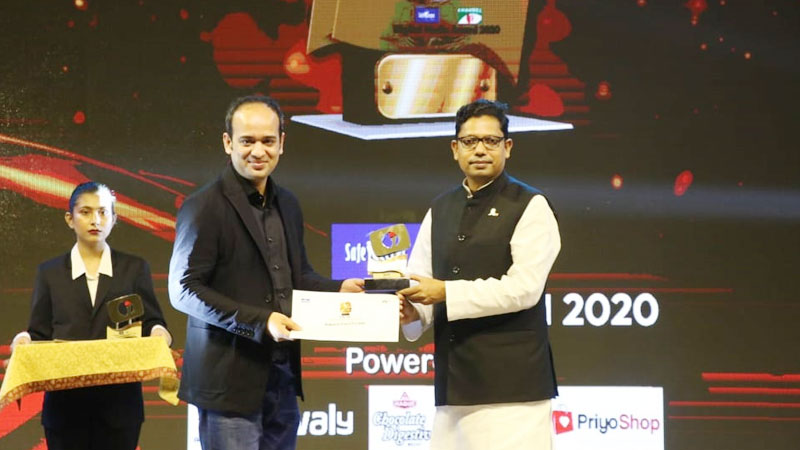 
Evaly, an e-commerce marketplace giant, has received ‘SafeKeeper Channel i Media Award-2020’ as the best e-commerce organization in the e-commerce category, the company said in a press statement recently.

On Friday, February 26, the winners were officially announced in various categories at the Chetana Chattar of the Channel i building while State Minister for Information and Communication Technology (ICT) Zunaid Ahmed Palak handed over the prizes and certificates to the winners as the chief guest. The awardees in various categories including Shykh Seraj, Director and Head of News of Channel i were present at the occasion.

After receiving the award, Mohammad Rassel, founder and CEO of Evaly, said, “I would like to express my sincere thanks and gratitude on behalf of Evaly family for voting for us. I would also like to express my gratitude and appreciation to the organizers for honouring us at an event organized by one of the top media in the country.”

“We sincerely believe that the key to this achievement is our nearly 1,000 employees and more than 40 lakh customers and vendors. Such honours have been an inspiration for indigenous entrepreneurs like us,” he added.

On July 16, 2018, Evaly officially commenced its journey. Within two years, the company has been able to bring in around 4 million customers and more than 20,000 large, small and medium entrepreneurs to its platform.

Evaly was also honoured by Asia One magazine as the fastest growing e-commerce organization in Bangladesh in the year 2020. Evaly also received the ‘E-Commerce Movers Award’ for its outstanding contribution during the corona period by e-commerce traders’ association e-CAB.