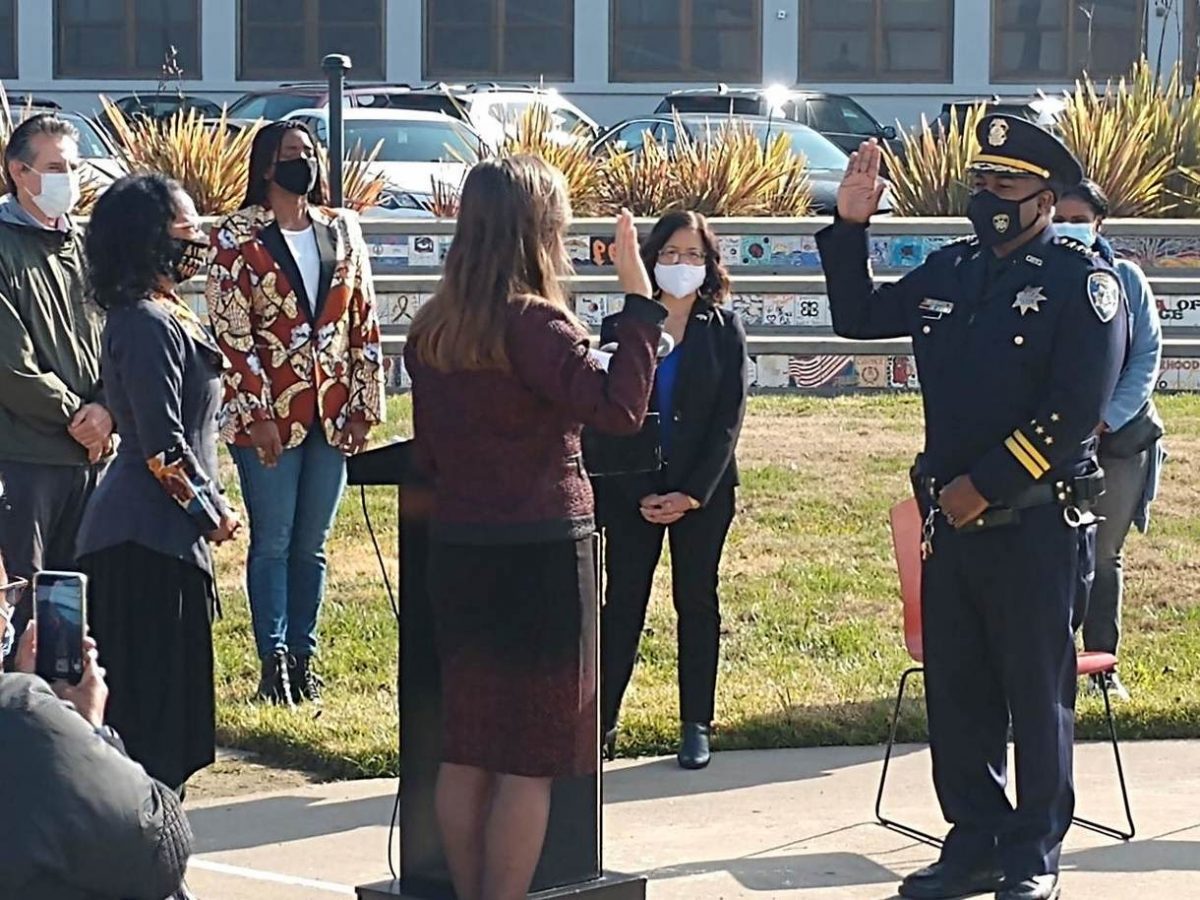 Oakland, CA — A sunny Monday morning at McClymonds High School looked very different than it has for the past eleven months. A crowd had gathered for a special event in which the school played a guest role. In the school’s Plaza of Peace, McClymonds graduate, LeRonne Armstrong, was sworn in as the new Oakland Police Chief. Mayor Libby Schaaf said she had asked Armstrong beforehand if it was OK that she conducted the swearing in since he is a McClymonds Warrior and she is a Skyline High School Titan. To laughter, she said Armstrong responded he would give her “a hall pass.”

Of course, the February 8 swearing in ceremony came after a tumultuous nine-month period in the United States in which tensions between the public and police reached a boiling point, including here in Oakland. That friction prompted OUSD’s Board of Education to pass the George Floyd Resolution which eliminated the District’s police department as of last month.

“I want to recognize the leadership that the school district has played in today’s conversation about what is public safety,” Mayor Schaaf said during the ceremony. “The passage this summer of the George Floyd Resolution, which committed this district to a more student-led vision of what safety is and feels like. To really commit to playing a stronger role in our collective task of reimagining public safety. That was an awesome act of leadership and that is the type of spirit in which we join you as we swear in a new chief that I believe embodies those very goals.”
Chief Armstrong speaks with his mother after his swearing in.

After being sworn in, Chief Armstrong took to the podium and was quickly overcome with emotion, especially when he talked about his mother who sat closest to the podium, and the role she played in his life raising him and his two siblings in West Oakland. “She had two jobs, and walked us to school, with no car. She told me when I was young, ‘Boy, there’s something special about you.’”

Armstrong then spoke about McClymonds serving as the site for the ceremony. “This is where I grew up. And it wasn’t just about a high school, it was a family. It was about a group of people in a marginalized community, that when we stepped into this building, it gave us hope.”

The new Chief also remembered the profound loss he and his family suffered when his brother was killed in 1985. “I knew then at the age of 13, that whatever I decided to do would center around safety in the city of Oakland. I didn’t want any other family to experience what I had experienced.”

But now, three and a half decades later, Armstrong said Oakland has suffered 15 homicides in just the first five weeks of the new year, one of whom, he said, was a member of his own family. “We will continue to pursue justice for those families. And we will work as hard as we can to reduce violent crime and heal this community together.”
Dozens of people wanted to take photos with the new police chief.

The job that lies ahead for Armstrong is enormous. Mayor Schaaf called it “the hardest job in America.” He told OUSD News that he will be focused on building trust with the young people of Oakland. “I started off with a relationship that was fractured. That I didn’t have trust in police. So, I decided early on that I wanted to be the change I wanted to see. I really wanted to see police officers that looked like me. Police officers that understood how I grew up and my experiences… I want to make this city safe. I don’t want to cause harm to this city. So, I say to those young people that are in the Oakland Unified School District, come join the Oakland Police Department, know that you can be part of this change, but also understand that their voices matter. I want to hear from them. I want to hear the ways in which they are being treated so that I can make change. They have my support. I am one of them.”

That is exactly the kind of approach that has many people, including in the McClymonds community, optimistic about the Oakland Police Department’s new direction, with Armstrong leading the way. “It’s huge. Mainly because he’s from the community. He’s experienced what we’ve all experienced,” said McClymonds High Social Worker, Relonda McGhee. “And so he’ll be able to bridge that gap of being police. That’s the biggest thing for me. Being able to bridge that gap, and heal our community.”

McGhee who, like Armstrong, grew up in Oakland and graduated from McClymonds, said she has historically had a hard time with the police. ”I always felt that fear of police. I’ve witnessed them abuse young black men, not just in West Oakland, but East Oakland, North Oakland. It’s been something that’s so hard to see growing up, and never trusting them.” She pointed to the fact that Armstrong is from Oakland, from McClymonds, and that he’s Black, as critical for the city right now. “All that together wraps up into hope for the community. Like, for real. I’m going to cry, I don’t want to cry… we’ve never had hope in Oakland. And we have hope now.”

After being sworn in, new Oakland Police Chief, LeRonne Armstrong, shared his plans for leading the department. This is part of his speech.

Post based on press release from OUSD to Zennie62Media, Inc.