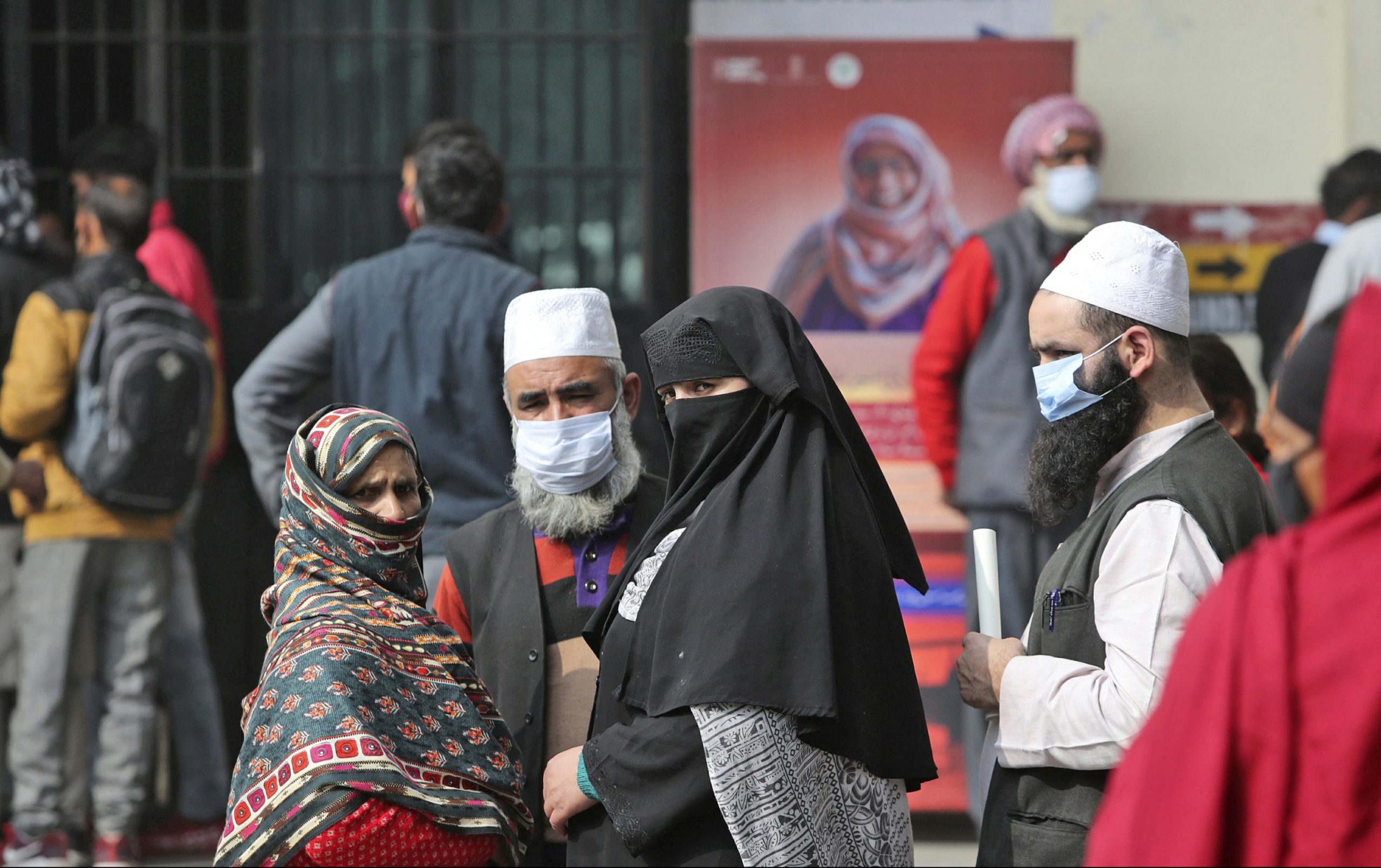 
NEW DELHI — Health officials in India say cases of the coronavirus variant first detected in South Africa and Brazil have been found in India.

They said Tuesday that the variant was detected in four travelers last month. Over 150 cases of another variant first detected in the United Kingdom have previously been found in India.

Cases in India have been falling dramatically and uniformly across the country for months. But the detection of the more infectious variants comes amid some worrying but so far isolated outbreaks.

A cluster of over a 100 cases has been detected in the southern India city of Bengaluru at an apartment complex. Another spike was detected by health officials in several pockets of Maharashtra state, including in Mumbai, the country’s financial capital.

— Pandemic stresses take a huge toll on college students, who struggle to pay for food and housing as jobs and internships dry up

The office of President Nayib Bukele says the shipment of AstraZeneca vaccine will arrive on a flight from an Indian plant where it is produced.

The country has recorded about 58,000 coronavirus infections and 1,758 deaths from COVID-19 so far in the pandemic.

MEXICO CITY — Mexico has topped 2 million confirmed coronavirus cases and 175,000 deaths, though officials concede that the country’s extremely low rate of testing means the real figures are much higher.

The Health Department said Tuesday that 8,683 more cases and 1,329 more deaths had been confirmed in the previous 24 hours.

Mexico’s 175,986 test-confirmed deaths so far is the third-highest toll in the world, behind the U.S. and Brazil. But estimates of the country’s excess deaths for 2020 suggest the real death toll from the pandemic is more than 220,000.

And excess death figures for January and early February — when the highest wave of cases came — have not yet been posted.

SEOUL, South Korea — South Korea is reporting 621 new coronavirus cases. It’s the country’s biggest daily jump in more than a month and is causing worries about a viral resurgence amid relaxed distancing rules.

Earlier this week, South Korea slightly eased its stringent distancing rules after the caseload showed a gradual decline for weeks. Restaurants, bars and coffee shops in the greater Seoul area are now allowed to stay open an hour longer, while dining curfews elsewhere are lifted.

Prime Minister Chung Sye-kyun is urging people not to lower their guard. He says the rules were relaxed to help struggling small business owners, not to ease the fight against the virus.

The numbers reported Wednesday raised South Korea’s total caseload for the pandemic to 84,946, with 1,538 deaths.

MELBOURNE, Australia — Australia’s second-largest city will relax its third pandemic lockdown, with authorities saying they have contained the spread of a coronavirus cluster centered on a hotel.

Victoria state Premier Daniel Andrews says most of the pandemic restrictions in Melbourne will be lifted at 11:59 p.m. Wednesday after no new infections were detected in the latest 24-hours period.

The Victoria state government has yet to say whether spectators will be allowed to return to the Australian Open tennis tournament under the same conditions as before the five-day lockdown.

The lockdown has been enforced across Victoria to prevent the virus spreading from Melbourne, which is the state capital.

Inslee said Tuesday that having children in classrooms “is the best way to educate our children.” He said it can be done safely.

The governor says moving toward more in-person instruction is in line with the scientific consensus and the latest guidance from federal officials.

Decisions about how and when to reopen schools are largely left to individual districts. Schools in Seattle and many other places in the state have been closed for in-person instruction for almost a year.

There are more than 1 million public school students in Washington.

MEMPHIS, Tenn. — The frigid weather that has descended on much of the U.S. is forcing a shut down of coronavirus vaccination sites in the Memphis, Tenn., area.

The Shelby County Health Department says the five inoculation sites that it runs will be closed through Saturday.

Authorities say the winter storms have made driving conditions too hazardous in the county, which includes Memphis and its suburbs.

About 3.5% of people being tested for coronavirus are getting back positive results, Newsom said, a rate that’s dropped precipitously in recent weeks. The number of people in hospitals and intensive care units and case rates are declining — all factors in determining when counties can begin further reopening.

By next week, a “substantial” number of counties are likely to enter the “red” tier, which allows indoor dining at 25% capacity, and the opening of other indoor spaces such as movie theaters, museums and gyms with limits.

BOGOTA, Colombia — A shortage of hospital beds during the coronavirus pandemic has led architects in Colombia to design portable, inflatable chambers for coronavirus patients that can be placed in gyms or parking lots.

The domes — each 5 meters (16-feet) wide — can house two patients and are connected by inflatable hallways. Tubes help circulate air, which can cycle through 16 times an hour, according to the architects.

Developers around the world have devised other inflatable or pop-up structures to cope with the wave of COVID-19 patients, some for small wards, others for a few patients and some for individuals.

The version at Bogota’s La Salle University includes eight, interconnected domes that can house 16 patients, and costs around $15,000, according to researchers. Units can be added or subtracted as needed.

Each is expected to be able to administer 6,000 vaccinations a day by the end of the week. Each will also have mobile units to head out into communities.

At Cal State LA, groups of cars pulled up to tents manned by military personnel. People were able arrive on foot or public transportation as well.

NEW ORLEANS — Mardi Gras joy is muted this year in New Orleans as authorities seek to stifle the spread of the coronavirus.

Bars were forced to close during the final weekend of the season, parades that generally start 12 days before the big day have been stilled, and Mayor LaToya Cantrell is promising a crackdown on large crowds.

Mardi Gras, or Fat Tuesday, is the annual pre-Lenten bash celebrated along much of the Gulf Coast, with the biggest bashes in heavily Catholic New Orleans. Last year’s revelry is now believed to have contributed to an early surge that made Louisiana a southern COVID-19 hot spot.

Tourism officials are stressing safety for those who do come to this year’s celebration, while showcasing the house floats and online attractions to keep the city on the mind of future post-pandemic tourists.

O’FALLON, Mo. — The snow, ice and bitter cold gripping Missouri has delayed people from coronavirus vaccinations, including those who signed up for mass inoculation events scheduled for this week.

The governor’s office said it was trying to reschedule the National Guard-run events, but that registrants should seek vaccinations elsewhere in the meantime.

The cancellations follow a storm that dumped several inches of snow in much of the state and sent temperatures plunging below zero. The cancellations are not expected to affect the weekly allocation of vaccines to each region.

Meanwhile, the health department in Memphis, Tennessee, suspended COVID-19 vaccinations for Tuesday after a winter storm dropped 4 inches of snow and left roadways difficult to maneuver.

WASHINGTON — President Joe Biden’s administration says delays in vaccine shipments and deliveries are likely because of severe weather across parts of the country.

The administration says the weather is expected to affect shipments from a FedEx facility in Memphis, Tennessee, and a UPS facility in Louisville, Kentucky. Both facilities serve as vaccine shipping hubs for multiple states.

The Centers for Disease Control and Prevention and other federal agencies are working with the jurisdictions, as well as manufacturing and shipping partners, to assess weather conditions and to help offset potential delivery delays and cancellations.

A winter storm overwhelmed power grids and immobilized the Southern Plains before it carried heavy snow and freezing rain to New England and the Deep South, leaving behind record-setting cold temperatures

White House press secretary Jen Psaki says that represents a 57% increase from when Biden took office nearly a month ago on Jan. 20.

Psaki also says the administration is doubling, to 2 million doses per week, the amount of vaccine being sent to pharmacies across the country as part of a program to extend access into neighborhoods.

Jeff Zients, Biden’s coronavirus coordinator, made the announcements during a regular White House call with governors on Tuesday.

Psaki says the administration is monitoring severe weather across parts of the country that has forced some vaccination centers to close temporarily, and that could jeopardize the viability of the vaccines.

PHOENIX — Arizona is on the cusp of reaching a pandemic death toll of 15,000.

State health officials on Tuesday reported 1,132 new COVID-19 cases and three additional deaths. That brings the overall number of cases in Arizona to 799,740 and the number of deaths to 14,981.

MADRID — The COVID-19 pandemic in Spain continues its slow retreat, with the two-week infection rate dropping Tuesday to 385 cases per 100,000 residents, down from nearly 900 cases at the end of January.

Hospitalizations are also gradually falling. Health Ministry figures show that the share of hospital beds for COVID-19 patients has dropped from a 25% peak on Feb. 1 to 15.35%.

Intensive care unit occupation over the same period has gone from 45% to 37.4% of capacity.

Spain has officially reported more than 3 million virus cases — just over 6% of the population — and attributed more than 65,400 deaths to the virus.