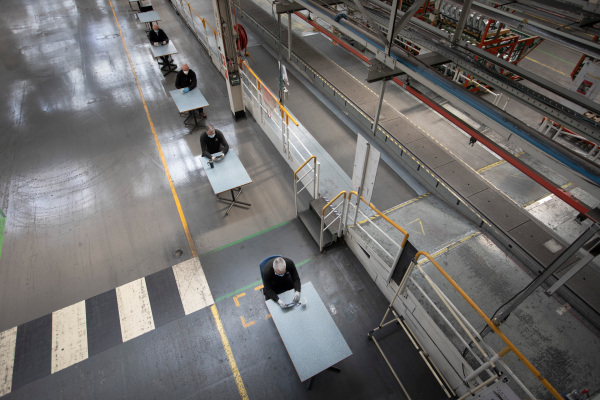 Hardware may indeed be hard, but a startup that’s built a platform that might help buck that idea by making hardware a little easier to produce has announced some more funding to continue building out its platform.

Fictiv, which positions itself as the “AWS of hardware”, providing a platform for those wanting to design and manufacture items, to easily evaluate and order the manufacturing, and subsequent movement of those goods, has raised $35 million.

It will be using the money to continue building out its platform and the supply chain that underpins Fictiv’s business, which the startup describes as the “Digital Manufacturing Ecosystem.”

David Evans, the CEO and founder, said that the focus of the company has been and will continue to be jobs that are highly specialised, and ultimately not mass-produced items, such as prototypes or objects that are specialised and by their nature not aimed at mass markets, such as particular medical devices.

The round — a Series D — is coming from a mix of strategic and financial investors. Led by 40 North Ventures, it also includes Honeywell, Sumitomo Mitsui Banking Corp., Adit Ventures, and M20 (Microsoft’s strategic investment arm), as well as past backers Accel, G2VP, and Bill Gates.

The round brings the total raised by Fictiv to $92 million, and its valuation is not being disclosed

Evans said that the last couple of years since its previous round ($33 million raised in early 2019) have well and truly tested the business concept that he envisioned when first establishing the startup.

Even before the pandemic, “we had no idea what the trade wars between the U.S. and China would do.”

Quite abruptly, the supply chain got completely “crunched, with everything shut down” in China over those disputes, at which point, Fictiv shifted manufacturing to other parts of Asia such as India, and to the U.S. That ended up helping the company when the first wave of Covid-19 hit, initially in China.

Then came the global outbreak, and Fictiv found itself shifting yet again as plants shut down in the countries where it had recently opened. Then, with trade issues cooled down, Fictiv again reignited relationships and operations in China, where Covid had been contained early, to continue working there.

“I guess we were just in the right places at the right time,” he said.

The startup made its name early on with building prototypes for tech companies neighboring it in the Bay Area, startups build VR and other gadgets, with services that included injection molding, CNC machining, 3D printing and urethane casting, with customers using cloud-based software to design and order parts, which then were routed by Fictiv to the plants best suited to make them.

These days, while that business continues, Fictiv is also working with very large global multinationals on their efforts with smaller-scale manufacturing, products that are either new or unable to be tooled as efficiently in their existing factories.

Work that it does for Honeywell, for example, includes mostly hardware for its aerospace division. Medical devices and robotics are two other big areas for the company currently, it said.

But Evans and his investors are careful not to describe what they do as specifically industrial technology.

“Industrial tech is a misnomer. I think of this as digital transformation, cloud-based SaaS and AI,” said Marianne Wu, the MD of 40 North. “The baggage of industrial tech tells you everything about the opportunity.”

Fictiv’s pitch is that by taking on the supply-chain management of producing hardware for a business, it can produce hardware using its platform in a week, a process that might have previously taken 3 months to complete, which can mean lower costs and more efficiency.

“And when you speed up development, you see more products getting introduced,” he said.

There is still a lot of work to be done, however. One of the big sticking points in manufacturing has been the carbon footprint that it creates in production, and also in terms of the resulting goods that are produced.

That will likely become even more of an issue, if the Biden Administration follows through on its own commitments to reduce emissions and to lean more on companies to follow through for those ends.

Evans is all too aware of that issue and accepts that manufacturing may be one of the hardest to shift.

“Sustainability and manufacturing are not synonymous,” he admits. And while materials and manufacturing will take longer to evolve, for now, he said the focus has been on how to implement better private and public and carbon credits programs. He envisions a better market for carbon credits, he said, with Fictiv doing its part with the launch of its own tool for measuring this.

“Sustainability is ripe for disruption, and we hope to have the first carbon-neutral shipping program, giving customers better choice for more sustainability. It’s on the shoulders of companies like us to drive this.”