The individual was a resident of Edmundston’s Manoir Belle Vue, which has seen 86 cases of COVID-19, and was between the ages of 80 and 89, Russell said at a live-streamed update.

The resident died “due to the virus combined with other factors,” Russell said. She asked New Brunswickers to join with her in offering the family “our most heart-felt condolences,” noting “I grieve with them.”

There have now been 24 COVID-related deaths since pandemic began.

The Edmundston region, Zone 4, remains at the red phase of recovery.

“In the coming days, we will be reassessing the situation to determine when it can join the rest of the province” in the less-restrictive orange phase, Russell said.

Russell also declared the outbreak at the Parkland Saint John nursing home “officially over,” with no new cases in 28 days, and announced three new cases on Tuesday. The cases break down in this way: 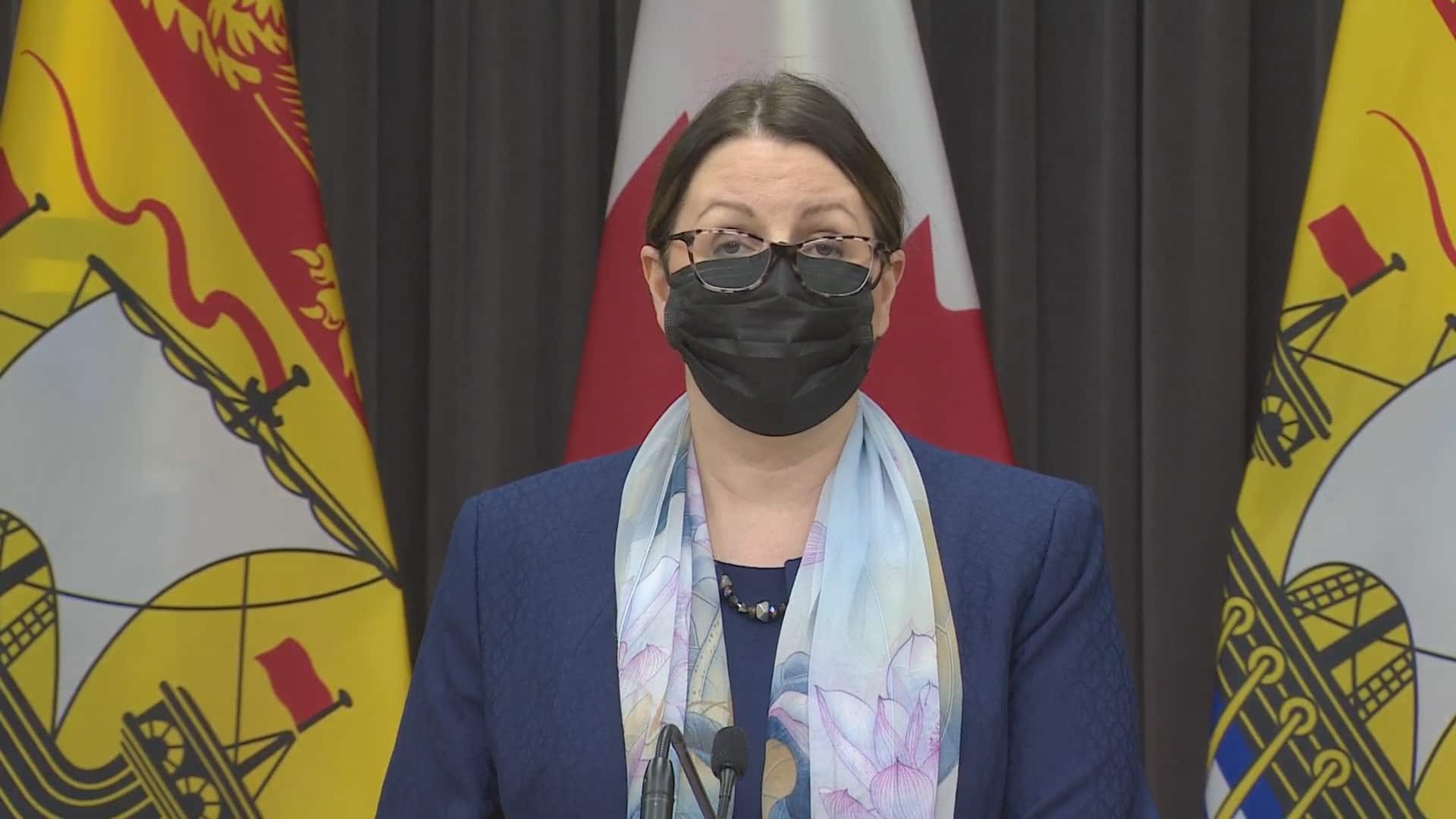 New Brunswick’s chief medical officer of health announces the end of the COVID-19 outbreak at the Shannex Parkland Saint John. 3:11

As March break looms, so does threat of variants

With March break just weeks away, Dr. Jennifer Russell is repeating the same request she issued about Family Day: Stay in your zone.

Russell said she was encouraged to see social media posts of New Brunswickers marking Family Day outdoors, or virtually, and in their own health zone.

“I do want to see New Brunswickers take this same approach” to spring break, she said Tuesday.

“We should all limit our travels during March break to within our own health zones … to limit opportunities for the virus to spread and prevent a repeat of the outbreaks that we’ve experienced over the past month.”

The Newfoundland and Labrador outbreak started at a school sporting event, led to 250 infections in less than a week and put the entire province in lockdown.

That alarming — and rapid — surge showed how the pandemic is changing, Russell said.

“We need to buy time for our vaccination effort so that we can protect our most vulnerable citizens before the new variants take hold.”

The good news, she said, is that the strategies we have learned over the last year — wearing a well-fitting mask, physical distancing, thorough hand-washing and staying home if you feel unwell — will be effective against the new variants.

N.B. hasn’t been told how many doses will be diverted

The province is cautiously optimistic it will receive the vaccines needed to vaccinate all health-care workers and long-term care residents by the end of March, based on an updated vaccine delivery schedule published by the federal government on Monday.

“I do believe we’re going to receive the vaccines that would accomplish that task, however the date may be a little bit off,” Health Minister Dorothy Shephard said, noting it will depend on the vaccines arriving in New Brunswick in a “timely fashion.”

However, Shephard said, if the updated vaccine delivery schedule numbers “stay on track,” the plan to have all priority residents vaccinated by the end of March or first week of April should be doable.

She said more vaccine rollout details would be shared this week.

On Monday, the updated federal government website for vaccine delivery schedules showed New Brunswick is set to receive more than 64,000 doses of the Pfizer-BioNTech between now and April.

That includes a forecast delivery of 8,190 doses of the Pfizer-BioNTech vaccine this week, and another 9,360 every week afterward until the first week of April.

The province is also expected to receive 2,400 Moderna doses by the end of February.

What is not yet known is how many of the scheduled doses will be diverted to Northern Canada as was announced on Friday.

Shephard said Tuesday she has not been told exactly how many of the doses will be diverted.

“We haven’t been given a full response yet from the federal government,” she said. “We are waiting on those numbers to be sure.”

CBC News has asked Health Canada to clarify the numbers and is awaiting a response.

The Health Canada website notes that the forecast numbers are “updated as the quantities of available vaccine and the timing of future deliveries” are confirmed.

“Fluctuations from week to week are possible,” it says, adding that forecasts are therefore subject to change on short notice.

To date, 21,182 vaccine doses have been administered in New Brunswick, with 7,505 people fully vaccinated with the required two doses, according to the province’s COVID-19 dashboard.