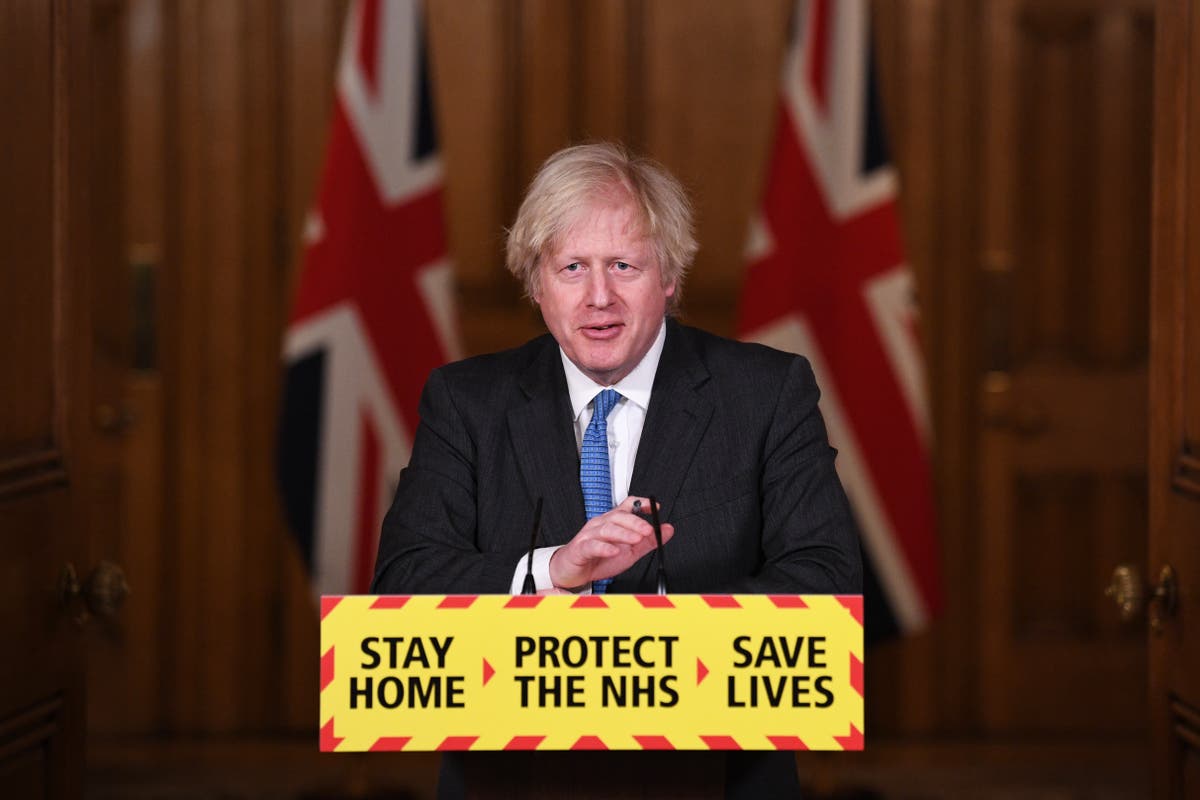 Rapid Covid tests could be used to reopen theatres and nightclubs, Johnson says

Prime Minister Boris Johnson’s proposal of using rapid coronavirus testing as a way to gradually reopen venues across the UK has been backed by the World Health Organisation’s special envoy on Covid-19.

On Tuesday, Dr David Nabarro said he believed rapid testing could indeed play a crucial role in reopening nightclubs, theatres and other venues that have been forced to shut down during the pandemic.

“The secret to getting life back to some degree of normality for most of us is going to be the availability of really reliable, super-quick tests,” Dr Nabarro told ITV’s “Good Morning Britain”.

“That will make movement so, so much easier,” he said.

The WHO special envoy also said that vaccination certificates could also be required for international travel and “activities where you’re actually going into a different jurisdiction”.

However, he said, “for moving around [domestically], it will be rapid tests”.

His comments come as Mr Johnson looks to bring England out of its current national lockdown with the “irreversible” easing of coronavirus measures.

On Monday, the prime minister said he was “hopeful” restrictions could be eased over the coming weeks.

Coronavirus-related deaths registered in the week ending on 5 February were down from the week to 29 January, data from the Office for National Statistics (ONS) suggests.

According to the ONS, 7,320 deaths were registered in England and Wales in the week ending on 5 February with Covid-19 mentioned on the death certificate.

More than 40 per cent of all deaths registered in England and Wales in the week to 5 February mentioned Covid-19 on the death certificate, according to PA. The number represents the third highest proportion recorded during the coronavirus pandemic.

Mayor of London Sadiq Khan has suggested that the next phase of the UK’s vaccination programme should include those whose jobs put them at higher risk of contracting the deadly virus.

Speaking on BBC Radio 4’s “Today” programme, Mr Khan said: “The next phase should include those occupations where…you’re more likely to catch the virus with adverse consequences,” according to the broadcaster.

Those with high risk jobs, he suggested, should be given some priority in access to vaccinations.

Vaccines minister Nadhim Zahawi has said he believes preliminary evidence on the effect of vaccines on coronavirus transmission is “really encouraging”. However, he cautioned, it may be weeks before we have a bigger picture of the data.

Mr Zahawi suggested early research from Oxford University had been promising, but he said two ongoing Public Health England studies would provide a strong picture of the impacts of the Covid-19 vacccine.

“We’ve got to make sure that you bring down the infection rates, hence why we’re waiting to see the data on transmission,” he told Times Radio.

“The Oxford team had some early data which is really encouraging on transmission, which has to be peer-reviewed,” he said.

Speaking with BBC Radio 4’s “Today” programme, he said: “We have a couple of very large-scale studies related to giving us better data on the vaccines.”

“We should be able to see really good data in the next few weeks from those studies.”

Rapid tests will make movement ‘so much easier’, WHO Covid envoy says

David Nabarro, the World Health Organisation’s special envoy on Covid-19, has said he beleives rapid testing will make movement “so much easier”.

Speaking on ITV’s Good Morning Britain on Tuesday, Mr Nabarro said: “The secret to getting life back to some degree of normality for most of us is going to be the availability of really reliable, super-quick tests.”

“That will make movement so, so much easier,” he said.

The WHO envoy said he believed certificates for vaccinations would be “likely to be required fo international travel”. However, he said, “for moving around” domestically, “it will be rapid tests”.

Nadhim Zahawi has said the government is battling a “tsunami of disinformation” as it works to address vaccine hesitancy across the country.

Speaking on Sky News, the vaccines minister said he was concerned as findings suggested that those who are “vaccine hesitant” tend to “skew heavily” towards Black, Asian and minority ethnic (BAME) communities.

“Although vaccine positivity in the UK – adults saying they will take the vaccine – is at 89 per cent,” he said. “The 11 per cent that are vaccine hesitant or have questions skew heavily towards some of the ethnic communities – the Black and Afro-Caribbean communities, the Indian and Pakistani and Bangladeshi communities.”

He said the government has a unit tasked with “dealing with the technology platforms to take down this fake news.”

The vaccines minister’s comments come in the wake of a study finding that lower proportions of Black and Asian staff at a hospital trust had come forward to have a Covid-19 vaccine.

The study, which has yet to be peer-reviewed warned that the findings could have “major implications” for the UK’s vaccine rollout.

Speaking with the BBC, Sara Gorton, Unison’s head of health said it was important to try to understand “any reasons for hesitancy”.

“Health workers gather information from many sources, so it’s vital to ensure those they turn to are correct,” Ms Gorton said. “NHS staff also need to be given time to ask vaccination teams about their concerns, talk to those who’ve had the jab and think things through. It can’t just be a one-off opportunity.”

Dr Habib Naqvi, the director of the NHS Race and Health Observatory, told the broadcaster the organisation was “deeply concerned that vaccine uptake for Covid-19 is lower among black and minority ethnic hospital staff”.

“Amongst those most at risk of dying from Covid-19 are also those that are most vaccine-hesitant,” he said.

“More needs to be done to mediate and ensure accurate information, based upon facts, is targeted in culturally appropriate ways, to reach those who need the vaccination the most,” Dr Naqvi asserted.

Nicola Sturgeon is expected to confirm whether pupils will be expected to return to schools next week.

The First Minister had announced at the beginning of the month that the lockdown in Scotland would remain in effect until at least the end of February, with some students returning to school on 22 February.

Under that plan, all students under school age in early learning and childcare would return, along with students in Primary 1 to Primary 3 and those in the senior phase of secondary school.

Speaking at a daily briefing on Monday, Ms Sturgeon said the plans would only move forward if the Covid-19 transmission rate remained low, however.

“We will look at the up-to-date data and take a final decision on that tomorrow, as we always said we would,” she said, according to PA.

“I am very, very, very keen to go ahead with that if at all possible,” she added.

Vaccines minister Nadhim Zahawi has sought to make clear that the British government is not looking into provided government-backed “vaccine passports,” but is instead looking to find a way to ensure that travellers can obtain “certificates” proving they have received the jab, if required.

The vaccines minister suggested the government was aware of the possibility that countries might require certificates proving travellers have received a vaccine jab.

He said that if that was a requirement, the government wants to “make it as easy as possible” for people to obtain such a document.

He said the effort would likely be similar to receiving a yellow fever vaccination certificate.

The government is “working on” the possibility of vaccine certificates for holidaymakers who have received the jab, the vaccines minister has said.

Previously, Nadhim Zahawi had ruled out the possibility of a “vaccine passport”. Instead, he said travellers should turn to their GPs for vaccination evidence.

However, speaking to BBC Breakfast, Mr Zahawi said “if other countries will require a vaccine certificate then I think it’s right that we facilitate it.”

Dozens of people have been fined after West Midlands Police broke up an illegal nightclub in Birmingham over the weekend.

Police said at least 70 people have been fined after officers disrupted an event held at a building on Buckingham Street.

They said they had received information that part of the building had been turned into an illegal bar.

After witnessing a number of taxis drop people off at the venue on Saturday, officers forced their way into the venue to find as many as 150 people packed into the building across two floors.

Police said some officers were pelted with bottles, with one officer suffering a minor injury after a door was smashed open by people trying to break away.

As many as 50 people are believed to have fled the event, but police caught as many as 70 revellers, who were issued £200 fines.

“Our officers continue to work long and hard to protect the public and reduce the spread of this deadly virus by breaking up these gatherings, often in really difficult circumstances,” Assistant chief constable Chris Todd said. “It’s unacceptable that our officers came under attack, and that one suffered a minor injury, just for doing their job and enforcing laws that are in place to keep us all safe.

“While there’s much to be hopeful of in terms of the rollout of coronavirus vaccines, people must remember that we are still in lockdown and the virus is still a real threat to communities across the West Midlands,” Mr Todd said.

Watch video of the raid below:

Vaccines Minister Nadhim Zahawi  has said that cinemas, theatres and other venues will be free to demand proof of Covid-19 vaccination before allowing people to enter, despite the government ruling out a “vaccine passport” scheme of its own.

On Tuesday, Mr Zahawi said it was “up to businesses” to determine what rules to introduce.