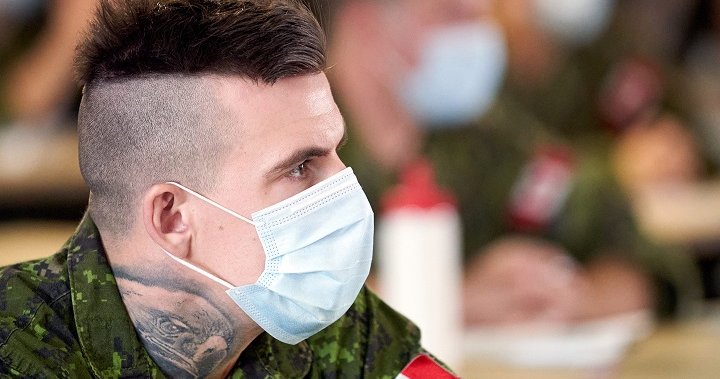 
The Canadian Armed Forces is dealing with a shortfall of several thousand troops as COVID-19 has forced the military to curb the training of new recruits for most of the past year.

While the military says there has not been any immediate impact on its missions here and abroad as it manages the shortfall and training challenges, a spokesman acknowledged the potential for longer-term ramifications.

“It is too early to determine how the reduced number of recruitment files being processed during the pandemic will affect CAF operations in the medium to long term,” Maj. Travis Smyth said in an email.

The federal Liberal government has authorized the Armed Forces to have at least 68,000 regular-force members and 29,000 part-time reservists, which is based on available funding and the missions that the military is expected to undertake.

Yet the military was short of those targets by about 2,000 regular-force members and nearly 5,000 reservists at the end of December, according to figures provided to The Canadian Press.

One reason: The military was able to provide basic training to only about a quarter the expected number of new hires since March as COVID-19 forced recruiting centres and training camps to close or otherwise curtail their operations.

3:31
CAF members went ‘beyond the call of duty’ amid coronavirus pandemic, says Payette

“The pandemic has limited training for large parts of the year in order to meet provincial and federal health and safety guidelines,” Smyth said.

“The reduced training capacity, in addition to strict protocols that the recruiting centres are required to follow to ensure the safety and well-being of applicants and staff, has reduced the number of files being processed.”

The pandemic has exacerbated a long-standing problem for the military, which has struggled for years to attract new recruits.

Federal auditor general Michael Ferguson flagged personnel shortages as a real threat to the Forces in November 2016, warning that it put a heavier burden on those in uniform and hurt military operations.

The military at that time was dealing with roughly the same number of unfilled positions as today, which resulted in a number of issues including a lack of personnel to fly or maintain various aircraft.

The shortfalls have persisted despite a 2017 Liberal government promise to expand the size of the Armed Forces to defend against growing global instability and emerging threats in space and online.

The recruiting challenge has contributed to a push by senior commanders to make the Armed Forces more inclusive, with active efforts to attract women, visible minorities, Indigenous Canadians and members of the LGBTQ community.

On the plus side, Smyth did indicate that the military had managed to make some progress on retaining more experienced members in 2019 and the first three months of 2020, though he did not have figures for the nine months of the pandemic.

Defence analyst David Perry of the Canadian Global Affairs Institute said the difficulties attracting and training recruits during the pandemic is not surprising given the restrictions that have been placed on society as a whole.

Yet he also noted that at a time of great economic uncertainty for large parts of the country, the military _ and the federal government _ represent stable employment, and that the military should at least be able to see better retention.

Either way, Perry said the continuing challenge getting new recruits in uniform underscores the importance of the military’s efforts to attract new recruits beyond what has been its traditional source: white men.

“The interest and the onus on the military organization to try and achieve some very longstanding goals … to broaden its recruiting base, to make it more representative of the country as a whole, take on increased importance,” Perry said.

He also worried that continued reports about hate and sexual misconduct in the ranks _ including the recent allegations against former chief of the defence staff Gen. Jonathan Vance _ send the wrong message to potential recruits.

Global News has reported allegations that Vance had an inappropriate relationship with a subordinate and made a sexual comment to a service member that he significantly outranked in 2012 before taking on the military’s top post.

Vance has not responded to The Canadian Press’s requests for comment, and the allegations against him have not been independently verified or tested in court. Global says Vance has denied any wrongdoing.

Military police are now investigating the allegations, while Defence Minister Harjit Sajjan has promised an independent probe into the matter.

Military police confirmed last week that they opened an investigation into Vance’s conduct during his time as deputy commander of a NATO force in Naples, Italy, before he was named defence chief. No charges were ever laid.