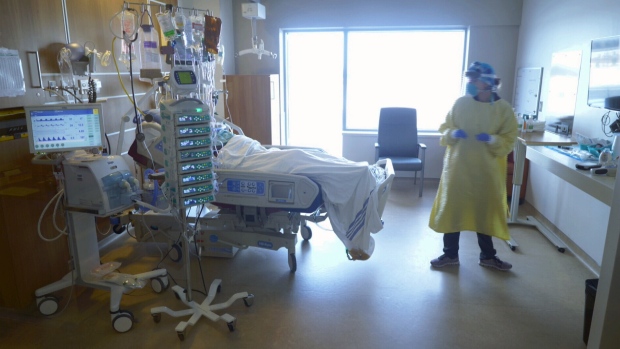 
TORONTO —
For hundreds of COVID-19 patients in some of Ontario’s hardest hit regions, hospitals from other cities have been a saving grace.

Without centres like the Oakville Trafalgar Memorial Hospital, more than 500 coronavirus patients in Ontario may not have received the timely care they needed.

These patients are aided by the province’s new IMS Transfer, or COVID-19 Incident Management System, which keeps an eye on patient numbers across hospitals and shifts them as necessary. It sends those in need of medical care from hospitals overwhelmed by a surge of coronavirus patients in their own region to hospitals elsewhere that have the space.

“Things could have been a whole lot worse without this IMS transfer service,” Dr. Chris Simpson, executive vice-president of Medical with Ontario Health, told CTV National News by phone.

“We’ve not seen any hospital completely overwhelmed… some hospitals would have been in real trouble.”

Over the last 10 weeks, Halton Healthcare, which operates Oakville Trafalgar, Georgetown Hospital and Milton District Hospital, has taken in 190 COVID-19 patients so far, the most of any Ontario health network in the system. Many of the sick are from Peel, a region west of Toronto, one of the hardest hit areas of the province during the second wave. The region of about 1.5 million has logged nearly 59,000 cases since the start of the pandemic.

Transfers typically occur when a critically ill patient requires treatment available only at specialized centres, or requires care that a rural or community hospital is unequipped to manage. But moving a single patient is an enormously complex task that involves input from physicians, social workers, patient managers, and co-ordination between hospitals.

COVID-19 upended everything and the province created a new management system. Before determining how many patients to transfer to a hospital, the province’s central command centre assesses the particular hospital’s patient numbers.

On a recent Sunday night, Judy Linton received an email asking her to prepare to admit 15 patients with COVID-19 for the coming week.

Linton, the senior vice president of patient experience and chief nursing executive for Halton Healthcare, has had to adapt quickly to the “load levelling” so hard-hit hospitals don’t exceed capacity and get crushed under an influx of COVID-19 patients.

“That’s our job — to help load level because one or two hospitals in Peel cannot handle the volume that they have. It’s our job to step in,” she told CTV News, who was granted exclusive access to see the process at work.

As projected by health officials in December, COVID-19 hospitalization numbers grew in 2021. Several weeks earlier, Halton took in 30 patients from other jurisdictions in just one week, Linton said. About a week later, it was 15. The week after that, another 20; then another 19. About 80 per cent of the patients in Oakville Trafalgar’s COVID-19 unit are from other regions of the province, said Elena Klassen, Patient Care manager.

“It has been challenging. That’s a lot of patients to fit in, particularly when they’re COVID, because we have limited space [where] we can put COVID patients,” Linton said, adding that they have not declined any transfers.

“We don’t feel like that’s our position to do that. We want to do the right thing.”

At a hospital meeting composed of nurses and patient coordinators at Oakville Trafalgar on Tuesday morning, when CTV was allowed to see the process, a count is taken to find room for 15 new patients by week’s end.

But everything can shift in an instant. Twenty-five per cent of the COVID-19 patients who arrive can quickly worsen, according to health data, requiring the hospital to keep a certain number of ICU beds unoccupied as a contingency measure.

The scale of the undertaking is unlike anything Halton Healthcare’s Dr. Fulan Cui has seen before.

“We have all banded together at our hospital and [in] the province to help each other out,” said the ICU physician.

In early January, when projections indicated that hospitalizations and ICU admissions would climb, head of Ontario Health Matthew Anderson conveyed a similar message to hospital CEOs.

At that time, hospitals were asked to reserve one-third of their ICU beds for transfers from overwhelmed hospitals in other regions.

“Our resources are provincial resources. We need to work as a provincial system at a level never required before. This means that no hospitals should feel they are on their own,” Anderson wrote in a letter. “This includes accepting patients from other hospitals in and outside your regions, sharing resources, and prioritizing — so we can continue to provide safe, effective care to both COVID-19 and non-COVID-19 patients across the province.”

If the transfer system wasn’t in place, sick patients would likely be stuck in swamped emergency departments without access to rooms and beds.

“So it’s incumbent on hospitals like ours where we have a little bit more space to intake patients as directed by the IMS to look after them, so they actually have a proper bed, they have nurses and doctors to look after them, and a team to look after them until they get better,” said Dr. Stephen Chin, Chief of Hospital Medicine at Oakville Trafalgar Memorial Hospital.

One way Oakville Trafalgar found space was by creating an indoor “field hospital.” Built in just one month on an unused floor, the unit looks much like a modern, unfinished loft, with exposed piping and open ceilings. The space, which has 40 hospital beds and a nursing station, provides full medical care for non-COVID-19 patients.

“The ceilings aren’t complete … but the warmth of the staff and the nurses is good,” said a man named Jim, who had been in the field hospital for two weeks and was being discharged.

Meanwhile, back in the COVID-19 ward, doctors are discharging one COVID-19 patient stable enough to recuperate and quarantine from home. As that patient’s road to recovery becomes smoother, their improvement means that a bed is ready to be occupied by someone new and much sicker from an overburdened hospital who arrived later the same day. In fact, 11 patients were admitted by Friday afternoon, according to hospital officials. Four others headed to Oakville were sent to Burlington instead.

“I think this is an experiment,” said Dr. Chin. “Ontario Health is going to see what happens. I think they see some of the greater efficiencies [in] what we’re doing. I see this happening indefinitely, potentially.”

It may be an experiment, but it is one that appears to be working — not just for patients, but for a more efficient, coordinated provincial health care system.

“This exercise in transfers has blunted the pressure,” said Ontario Health’s Simpson. “Going forward, this could be [more than] crisis management. It could be a way to get patients timely care.”