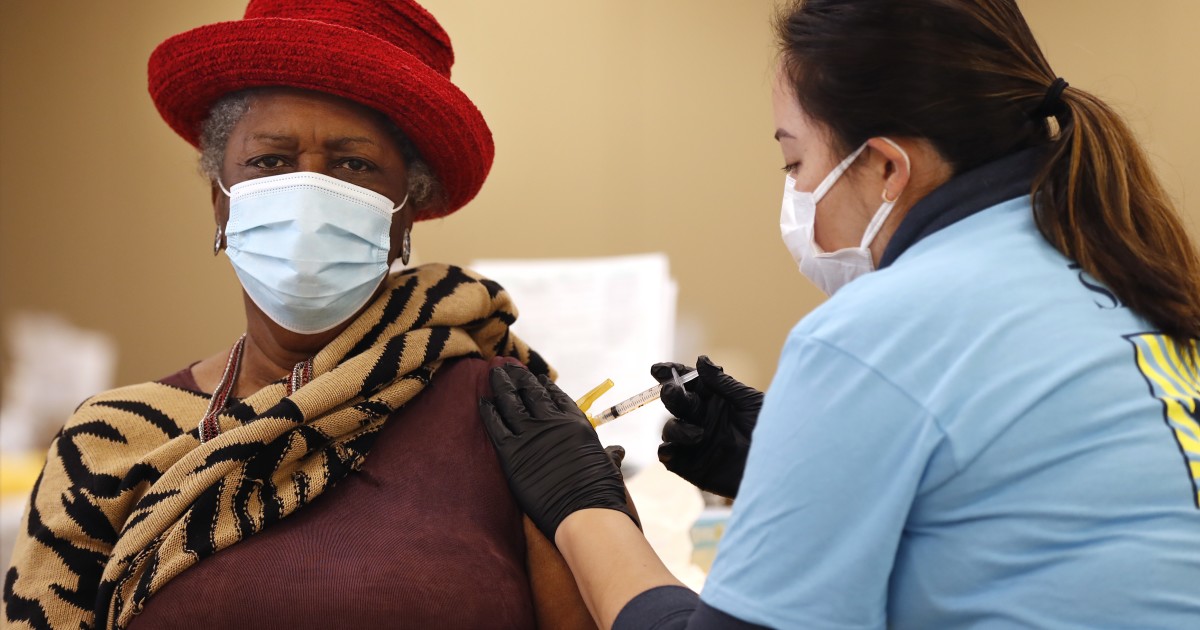 
A limited supply of COVID-19 vaccine combined with language and technology barriers are keeping many San Diegans of color waiting for their shot at immunity.

Most White San Diegans eligible for the vaccine have gotten a shot, with roughly 551 vaccinated per 1,000 eligible residents, compared to 527 for Latinos, 520 for Asians and 349 for Black San Diegans, according to data on current vaccinations from the county’s vaccine dashboard and eligibility estimates from the San Diego Workforce Partnership.

Some of the county’s demographic data, posted on its online dashboard, is poorly defined. Roughly 15 percent of those vaccinated are listed as “other race,” and 12 percent did not disclose their race or ethnicity. Supervisor Nathan Fletcher said on Thursday that the county is still looking into the matter, noting that the dashboard combines data reported from various sources.

Vaccination for communities of color has lagged behind the county as a whole for reasons ranging from vaccine hesitancy to, in many cases, difficulty securing an appointment and making the trek to get the shot. And then there’s the matter of a vaccine rollout that is still mostly focused on older adults, whereas communities of color tend to be younger overall.

Only certain groups are currently eligible for the vaccine — mainly health care workers, people 65 or older, and those who live or work in long-term care facilities.

But San Diego State University bioethicist Joseph Stramondo says the skewed demographics of those at the front of the vaccine line are no accident.

“It’s kind of a cop-out, simply because who’s eligible at this point is a result of political power,” he said. “Who has the opportunity to work in the health care profession? Who’s living into their old age in a nursing home or otherwise?”

Prioritizing vaccine doses by age is speedy and straightforward, and there’s good reason to do it. About one out of every seven San Diegans 80 or older who’ve gotten COVID-19 has died, according to the county. Andeight out of every 10 people who’ve died of COVID-19 in the U.S. have been 65 and older.

COVID-19 has also taken a heavy toll on minority communities. Black, Hispanic and Asian San Diegans have suffered from higher rates of hospitalization and death from coronavirus infections than White residents, according to the county’s weekly coronavirus report. That’s due in part to people of color being less likely to have jobs that can be performed from home and more likely to suffer from pre-existing conditions that worsen the disease, such as sickle cell, obesity and Type 2 diabetes. And while the state announced Friday that individuals with certain underlying health conditions will be able to get vaccinated regardless of their age, that effort won’t begin until March 15.

The disproportionate impact of the pandemic on minorities hasn’t always translated into extra eagerness for a COVID-19 vaccine.

To George McKinney, senior pastor of Impact Global Ministries in Valencia Park, that hesitancy boils down to a simple question.

“Nobody really seems to care about the Black community. Then, all of a sudden, there’s all this concern about getting us vaccinated,” he said “Why now?”

Researchers say that immunizing the vast majority of the public against the coronavirus is essential to ending the pandemic. But a long history of neglect and, at times, abuse of people of color in medical research has made many minorities wary of vaccines.

An October survey by the Public Policy Institute of California showed that 44 percent of Black Californians would definitely not get a COVID-19 vaccine, compared to 17 percent of White people.

McKinney says he’s seen skepticism soften over the past several months. In addition to serving as a pastor, he’s president of St. Stephen’s Retirement Center in Valencia Park, where 30 of 50 residents at one of the retirement center’s facilities recently opted to get vaccinated through CVS.

“The response to taking the vaccine is a lot better than what I imagined,” he said.

Part of the reason, he suspects, is simply fear — as the pandemic has raged on, most of the people in his circle now know someone who has died from COVID-19. But he believes that local Black doctors endorsing the vaccine has helped, too.

Dr. Suzanne Afflalo, who has spent 23 years as a family physician at Kaiser Permanente and helped found the county’s COVID-19 Equity Task Force, is one of those trusted messengers. Friends, neighbors and patients peppered her with questions after she got her shot.

“When I got my first dose, they reached out and said, ‘Well, how was it and how did you feel?’ And they were curious,” Afflalo said. “There’s a level of fear in not knowing what to expect.”

Afflalo is one of many Black physicians, community leaders and county officials (including public health officer Dr. Wilma Wooten) who’ve contributed to blackcovidfactssd.org, a one-stop-shop for all things COVID-related, including information on who can get vaccinated, the truth behind vaccine myths and what side effects to expect after your shot.

Community health workers are sharing this same information with the county’s diverse array of refugee and ethnic groups. The San Diego Refugee Communities Coalition, a collective of ethnic community-based organizations, is working alongside the county to share information about the ever-changing vaccine rollout in 21 different languages, from Amharic to Burmese to Swahili. Community health workers are sharing that information through Facebook Live town halls, religious centers and, at times, one-on-one conversations.

“We already have established ways of relaying messages to the community,” said Nao Kabashima, executive director of the Karen Organization of San Diego, which serves a number of ethnic minority groups from Myanmar (also known as Burma). “Community workers know what works the best, (something) county or the government or mainstream organizations don’t know.”

The Chicano Federation, a Latino advocacy organization, is also partnering with the county by launching a call center pilot program to help with scheduling appointments in the South Bay.

Chicano Federation CEO Nancy Maldonado said securing an appointment is a major barrier for some Spanish speakers and older residents who are not familiar with technology or who don’t have transportation.

Call center staff will both help people sign up for appointments and offer transportation to those who need it. Maldonado said the county has promised to set aside vaccine appointments for the nonprofit to give out to people who live in South San Diego, though she doesn’t know the precise number of appointments that will be set aside.

“There are so many factors that set the system to not be equitable,” Maldonado said. “I do think that we’re taking steps to make this process a little more equitable.”

To help make it easier for people to get vaccinated near where they live, the county has set up immunization sites that span the region, including a superstation in Chula Vista and smaller locations in San Ysidro, National City and Valencia Park.

The Chula Vista site has given more than 33,250 vaccines since it opened in January, according to Scott Evans, CEO of Sharp Grossmont and chair of the health system’s vaccination program. The site was designed as a walk-up location to accommodate individuals who don’t have cars and rely on public transportation.

The effort to place immunization sites in hard-hit communities seems to be paying off — at least partially. On Tuesday, several of the people who exited the South Bay superstation were Chula Vista residents, though others drove down from Ocean Beach, La Jolla and Pacific Beach in search of any vaccine site where they could get an appointment.

The San Diego Black Nurses Association, in partnership with the county, will hold a vaccination clinic next week in southeastern San Diego for area residents.

“If you’re going to be effective you have to go to where the people are because either, A, they have the ability to come to you or, B, they want to see people who look like them providing the care for them,” said Samantha Gambles Farr, president of the association.

Alliance Health Clinic, which primarily serves San Diego’s refugees and low-income residents, has also made a concerted effort to make sure the vaccine rollout reaches those who would otherwise be left behind. Walter Lam, the clinic’s CEO, says staff rely on word of mouth rather than online systems to spread the word each time the clinic gets a small shipment of doses from the county.

“We had a serious outcry from the community about lack of access to the system that exists right now — first and foremost, transportation, computers, language,” Lam said. “If we don’t do it for our people, who will?”

So far, the clinic has vaccinated 250 people. And on a rainy Friday morning, Alyce Pipkin-Allen became one of them.

With the quick prick of a needle, the Oak Park resident got her shot while seated in her car in the clinic’s parking lot. She’s been a bit nervous about getting vaccinated. So naturally, she had her husband get the shot weeks ago and has been checking his temperature ever since, looking for any sign that the vaccine is making his body go haywire.

He’s fine, and that was reassuring. So was hearing local Black doctors endorse the vaccine, from Afflalo to Wooten.

“There’s enough Black people around this whole thing and around my life and around my political life, and I do trust that they think this shot works,” Pipkin-Allen said. “They’re kind of my thermometer. When they say that it’s time, I know that it’s OK.”