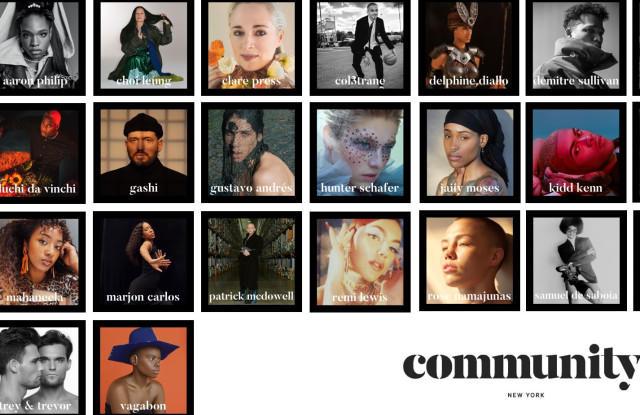 
A trio of veteran modeling agents are branching out with their own talent agency and taking a new approach to filling out their roster.

Community New York, launched only a few weeks ago by twin sisters Moe Lamstein and Butterfly Cayley and their longtime friend Richie Keo, is looking to not only build, as the name implies, a sense of community for all of their clients, but vying to represent some of the most unique people they can find. The agency is joining a cluster of others in p.r. and branding to launch amid the coronavirus pandemic.

Already Community has signed up a mix of models, artists, musicians, actors, journalists and public speakers, and even a chef, numbering about 15 so far. Nearly all of them are in the BIPOC or LGBTQ communities. There’s Hunter Schafer, who acted opposite Zendaya in “Euphoria”; musicians like Arca and Gashi; MMA fighter Rose Namajunas; artists such as Samuel de Saboia and Delphine Diallo, and models like Aaron Philip and Lewis Freese.

Lamstein described the agency vision of the three founders, all hailing from Laotian parents who immigrated to the Midwest, as “strong and curated” when it comes to talent. And to be sure, there isn’t a conventional story to be had behind any of Community’s current clients. It’s a group that goes across genders, races and identities.

“We didn’t want to be just another modeling agency or talent agency,” Lamstein said. “We wanted to do something different, and for us, three first-generation Laotians, we don’t come from fashion. We come from factory workers, immigrants.”

But Lamstein, Cayley and Keo have all worked in fashion through modeling for the past 20 years. Lamstein was with Elite for eight years, the last few of which Cayley worked as the agency’s executive vice president after spending many earlier years at DNA. Keo also spent a few years at Elite, and DNA before that. Together they represented some of the biggest names in modeling, including Mariacarla Boscono, Doutzen Kroes and Natalia Vodianova.

The Community founders all had their contracts at Elite come up this year and decided not to renew, they said.

“We were kind of going back and forth on what made sense for us,” Keo said. “We’d been in COVID-19 for six months and we were all just having a revelation about what was important to us.”

“We could have stayed at Elite, we could have gone to another agency, but it was like, ‘What are we doing?” Lamstein added. “We have such a unique vision for where the industry is going and who we want to represent. This is the time to do it.”

“Also, when we were talking to other agencies, no one knew where the industry is going and they still don’t,” Cayley said. “So we kind of took the bull by the horns and said, ‘Let’s do this’ and then how do we do it our way and how do we empower our talent.”

As for how they go about finding that talent, it’s a mix of referrals from friends and family and online scouting. Then they simply let the clients be who they are.

Model Aaron Philip recently signed on with Community and is working with Keo after the team reached out. She called the agency and its approach to representation a “breath of fresh air.”

With her focus on modeling, Philip said she has “no doubt” that she’ll get where she wants to go with Community.

Another client is Namajunas, a mixed martial artist, now represented by Cayley. Of her decision to join the agency, Namajunas said it came down to her belief in “energy and relationships.”

“Community is very personable and real,” she added, “and that’s what I look for in people I work with.”

And what Lamstein, Cayley and Keo are looking for in who they represent sounds similar. Cayley said sitting down, mainly over Zoom, with new clients to hear their story has been “so powerful and inspiring.”

“To hear them say, ‘I didn’t have anyone growing up that I could identify with,’ that’s our idea of beauty,” Cayley went on. “Now it’s about getting into the mass market and getting that reach for them.”

Some Magazines Suffering Amid Pandemic, Online and Off

A New Generation of Boutique Agencies Emerging From the Pandemic

A Lot of Companies Spent More on Facebook Advertising Amid Boycott