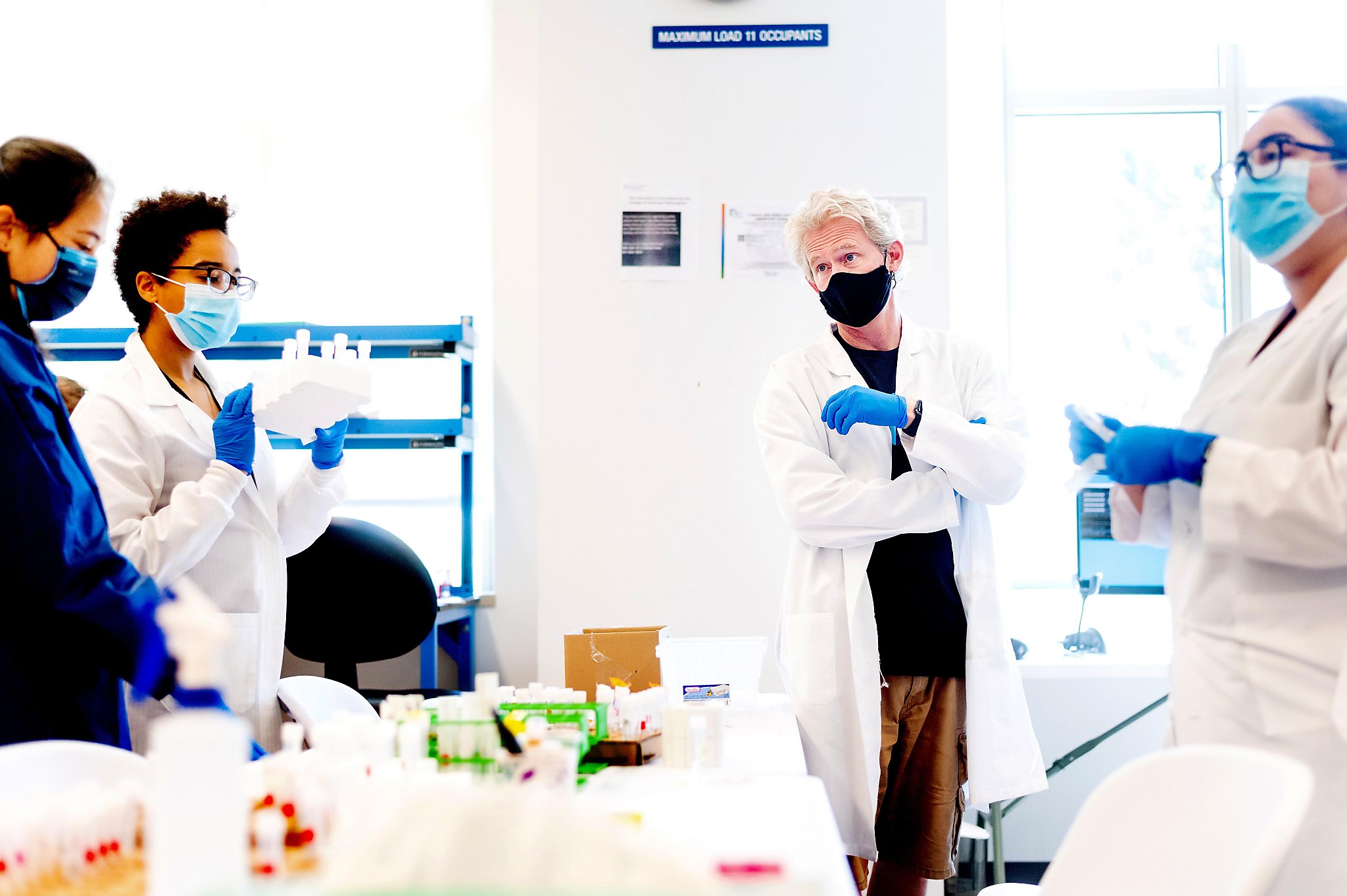 Santa Clara County had been lucky: A resident who’d traveled out of the country and returned home infected with a worrying new coronavirus variant had only exposed one other person to the mutated virus.

From the time the resident came down with symptoms to the confirmation Wednesday that a new variant from South Africa was the source of infection, more than two weeks had passed. But the individual had been “exquisitely compliant” with local health orders that mandated post-travel quarantine, said county health officer Dr. Sara Cody.

There was no risk of the variant spreading in the community — not from this case, at least.

But the discovery of that case — plus a second infection with the same variant in an Alameda County resident, also announced last week — rang fresh alarms over the urgent need to detect mutations to the virus that may hinder efforts to control the pandemic.

California’s ability to hunt down these variants relies on widespread and rapid genomic sequencing. But the state, like the rest of the country, is not close to doing enough sequencing. Expanding that effort will require state and national leadership, unprecedented collaboration among laboratory scientists, creative shortcuts and dedicated funding, infectious disease experts say.

Only about 0.4% of California’s 3.4 million cases have undergone genomic sequencing, far below the minimum 5% most experts believe is necessary to quickly identify new variants and understand how widespread they are in communities. And the results almost always come out a week or more after the person is past the most infectious stages of disease, limiting public health officials’ ability to contain it.

“This reminds me of our early days of testing, when we had very little testing. A year ago I remember the very uncomfortable feeling that there had to be cases out there, we’re just not seeing them,” said Cody at a news conference last week.

She gets the same disconcerting vibe about variants now. Santa Clara County is doing more sequencing than most California counties — it’s one of only a handful that does sequencing its own public health labs — but “it’s still just a small fraction” of cases, Cody said. “The capacity just isn’t what it needs to be in order to rapidly identify and track emerging variants.”

The United States is 34th in the world in the percent of cases sequenced, according to an international database of coronavirus sequences called GISAID. And California ranks 22nd among U.S. states in percent of samples sequenced, according to the Centers for Disease Control and Prevention. The state is second only to Texas for the total number of sequences done, but far below places like Hawaii, Maine and Washington state that sequence more than 2% of all cases.

Sequencing has improved in California since the start of the year, as public health officials have grown increasingly concerned about new variants. But the state will need to dramatically ramp up its sequencing — by more than tenfold, some experts say — to get a clear understanding of where and how variants are spreading.

And the state will need to find ways to more quickly deliver useful results to counties so they can take actions to limit the spread of these variants, whether that’s close monitoring of individuals to prevent outbreaks or community restrictions, such as stay-at-home orders, to slow down transmission.

“We just don’t have the infrastructure built up like some of the European countries and some of the Asian countries to do that,” said Dr. Susan Philip, the acting health officer for San Francisco. “So we’re flying a little bit blind when it comes to variants.”

Genomic sequencing is critical for understanding how the coronavirus is changing over time and quickly identifying new mutations that could make it more infectious, deadlier or more resistant to vaccines.

Worldwide, a handful of concerning variants have been discovered over the past few months, and public health officials worry they are already established in the United States and could interfere with efforts to end the pandemic. Among the variants are one from the United Kingdom that is known to be 30% to 70% more infectious; variants from South Africa and Brazil that appear to reduce the effectiveness of some vaccines; and a pair of variants discovered in California that could be problematic but are still being studied.

All but the Brazil variants have been identified in California over the past six weeks; the variants from the U.K. and California have increased dramatically since the end of last year. The CDC and others predict the U.K. variant will be dominant in parts of the U.S., including Southern California, in March.

New variants spreading rapidly in communities could delay school reopenings, the head of the CDC said Friday. California officials have said they fear another surge in cases could come in the spring if more infectious variants spread faster than the state is able to vaccinate people.

Genomic sequencing provides the genetic blueprint for a virus — basically the instructions that a virus uses to reproduce. The instructions are complicated, made up of about 30,000 amino acid “letters,” and time consuming to produce. The entire process, from drawing genetic material from a viral sample to running it through a sequencing machine and producing the final blueprint for analysis, in theory takes three to five days and costs $50 to $500, depending on the lab and the technique used.

But in reality, it almost always takes longer to produce results. Most laboratories do sequences in batches that are run every few days. Preparing samples for sequencing can also drag out depending on staffing and resource issues. Even transporting samples from a lab that does testing to one that does sequencing can add two or three days.

Some laboratories hunt for specific variants and target their sequencing efforts around that. The Stanford Clinical Virology Laboratory screens samples for certain mutations associated with the most concerning variants, then mostly limits sequencing to samples with those mutations. Since the start of the year, the lab has screened more than 1,700 samples and sequenced around 200. It found the variants from South Africa last week — the only such cases in the state so far — and also found the first Bay Area cases of the more infectious variant from the U.K.

Dr. Benjamin Pinsky, who runs the Stanford lab, said his team has started telling county public health officials when the they find concerning mutations, instead of waiting another several days for the full sequencing results. That gives counties a head start on taking action, he said.

“We started doing that for the U.K. variant, so (public health officials) can accelerate the interventions — find those individuals and confirm that they were isolating, and do contact tracing to limit spread,” Pinsky said. “If we can get these results out reasonably quickly then we can have that extra layer of protection.”

Screening for mutations is potentially one option for speeding up the search for variants statewide, at least as a short-term solution, some public health experts say. It would be faster and cheaper than ramping up the full sequencing process.

But relying on mutation markers, or using other strategies to quickly identify specific variants, is less useful for discovering never-before-identified variants or for understanding how widespread known variants are in the community.

To do that, laboratories need to do randomized sequencing. That involves sequencing a random subset of positive tests instead of prioritizing samples that are already suspected to be new variants. Many labs do both targeted and random sequencing.

Randomized sequencing might have helped scientists find the variant from the U.K. earlier. The first case was identified in California at the end of December by scientists in San Diego, only after they knew to start looking for it.

“If we knew this variant was here, if we knew it was important and it was starting to rise, there might have been reason to shut down Los Angeles County earlier,” said Dr. Jeffrey Golden, vice dean of Research and Graduate Education at Cedars-Sinai in Los Angeles, where one of the California variants was identified.

The state desperately needs a more streamlined approach to sequencing, many scientists say. Sequencing in California and the rest of the country is patchwork, with an assortment of commercial, academic, and public laboratories doing the bulk of the work, each with their own rules for everything from labeling samples to choosing which ones to sequence.

About 30 labs in California have contributed a total of about 13,000 sequences to the GISAID international database over the past year. A handful of those labs coordinate with the state through its COVIDNet program, which is California’s attempt to ramp up and centralize sequencing.

The CDC also has launched a program, called the National SARS-CoV-2 Strain Surveillance (NS3) program, to increase sequencing. On a local scale, scientists at the Chan Zuckerberg Biohub, a lab in San Francisco that does roughly 45% of all sequencing in California, are helping county public health departments across the state develop their own sequencing labs. They hope that will result in faster and more widespread sequencing.

It can’t happen quickly enough, said Dr. Charles Chiu, director of the UCSF-Abbott Viral Diagnostics and Discovery Center. His laboratory was among the first to identify the new California variants, and he is currently conducting tests to determine if they may be more infectious or reduce vaccine effectiveness.

Chiu said he’s concerned about the variants already known to be circulating along with others that haven’t yet emerged. Last week his lab sequenced a virus sample that appears to have several mutations in common with other variants — including the ones from South African and Brazil — but also some new mutations.

The case needs more investigation. But it’s yet another example of the need to cast a wider net for these cases with more sequencing, Chiu said.

“We need to know,” he said. “For public health reasons as well as our ability to control the pandemic, we need to understand these variants are evolving and spreading.”