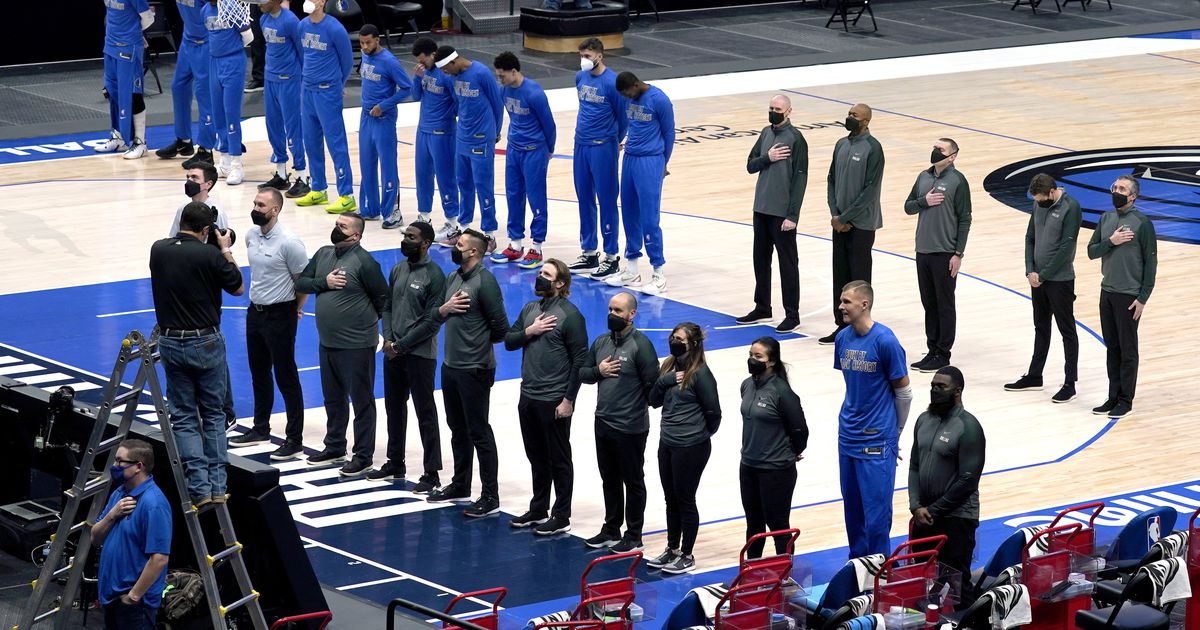 
If the national anthem is good enough to play before concerts and birthday parties, it surely needs to remain a part of the professional sports experience.

Dallas Mavericks players and staff stand during the playing of the national anthem before the first half of an NBA basketball game against the Atlanta Hawks in Dallas, Wednesday, Feb. 10, 2021. (AP Photo/Tony Gutierrez)

I really miss going to concerts. That’s been one of the toughest parts of life in the pandemic — not being able to attend a live show and experience in person the visceral reaction that comes from some hotshot guitarist absolutely melting your face off.

I did purchase one concert livestream a few months back, and it just didn’t do it for me, not the least of which because the artist’s feed went through some technical issues that shut it all down for 10 or 15 minutes.

But you know what I miss most about not going to concerts? The deeply patriotic thrill of everyone standing for the national anthem beforehand.

I can’t even describe to you how much my heart would swell hearing “The Star-Spangled Banner” fill the concert hall, right before death-metal band Behemoth’s sonic-mayhem performance railing against religious-fundamentalism laws in Poland.

Got all the feels right now.

I can only express my gratitude for covering the Utah Jazz, who have allowed fans in the building for every game and thankfully continued to have the anthem performed pregame every single time. Can you imagine if I was in Dallas? Covering that charlatan Mark Cuban’s socialist Mavericks? On Wednesday, the NBA had to issue an official edict to force them to start playing the anthem again pregame, because they’d been skipping it.

If I had to endure the indignity of covering a sports and entertainment event that took place without a performance of the national anthem preceding it, how could I even focus?

Everyone knows that guys running around in tank tops and shorts and putting a ball through a hoop just isn’t the same if, beforehand, fans haven’t had the chance to solemnly honor this country by hooting and whistling at the singer’s deliberate pause following the words “yet wave,” or by grabbing some chicken fingers from a restaurant on the concourse as it’s being performed.

God bless you, Adam Silver, for maintaining this hallowed and exceedingly relevant tradition.

Without it, I would be limited to only hearing “The Star-Spangled Banner” played on the video screens in the pumps at the gas station, or sung by the DoorDash delivery guy as he’s dropping off some chicken tikka masala on my front stoop. Oh — I almost forgot — also right before each episode of “The Mandalorian” gets going on my Disney+ app.

Heaven knows this pandemic is the worst for preventing me from getting my full patriotic fix at all the old, typical places.

Being the snowflake I am, I’ll shamefully concede that I’m not quite ready to spend three hours in a small, enclosed place with random strangers yet. Which is unfortunate, because there’s nothing quite like seeing cinematic action unfold on the big screen … right after every moviegoer has stood for the anthem.

Believe me when I tell you that there are no words sufficient in my lexicon to impress upon you just how much I’m looking forward to the day when I can take my big ol’ tub of buttery popcorn into a darkened theater to watch “Avengers 7 — Gender Wars: Dazzler and Elsa Bloodstone vs. Urthona and Manifold.”

Partly because that movie will be [expletive] epic, but more so because my soul feels empty right now at missing out on the tradition of sitting through eight trailers … turning on the lights, standing up, putting my hand on my heart, and singing along to the playing of the anthem in sweet, sweet Dolby Digital surround sound … then re-settling into the darkness for the feature presentation.

Not seeing my work colleagues has been hard, too.

The Salt Lake Tribune’s editors made the decision in the early days of the pandemic shutdown to insist that everybody work from home for safety reasons. Since then, they’ve loosened up their restrictions just a tiny bit, although there still cannot be more than six people in the office at any one time.

Any person who’s ever enjoyed their job can appreciate both the camaraderie that comes from in-person interactions with your work friends, to say nothing of the daily 10 a.m. ritual of alternating staffers belting out the anthem.

You haven’t lived until you’ve heard movie critic Sean Means’ 14-syllable rendition of that opening “O.” Man, how I envy those of you back in your offices who get to participate in this every day.

Hopefully, though, someday soon I can once again start traveling to other arenas, and hear still more anthems performed as a result of commissioner fiat, decree, and mandate.

It’s getting increasingly hard to justify spending so much time at the supermarket, just to hear the butcher’s lovely rendition over the store’s loudspeakers at the top of every hour.