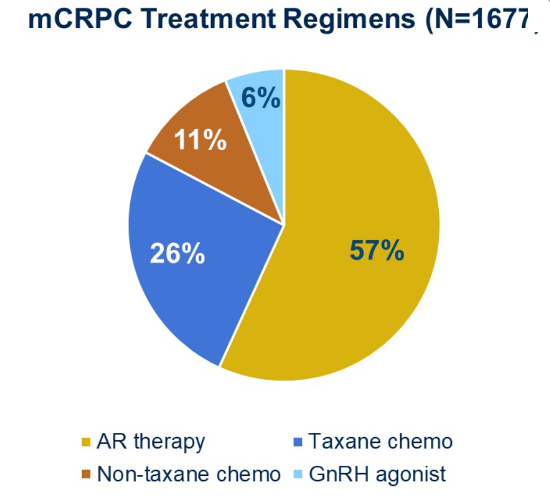 (UroToday.com) Real-world data regarding treatment patterns for metastatic castration-resistant prostate cancer (mCRPC) remain scarce due to the lack of a specific ICD-10 code for these patients. Using the Optum Research Database, which includes enrollment information and medical/pharmacy claims for over 73 million enrollees with commercial coverage and 8.3 million enrollees with Medicare, the authors created a specific algorithm to identify patients with mCRPC with claims between 2008 and 2019. Criteria for identifying mCRPC patients included (1) more than one claim for prostate cancer, (2) one or more claims for pharmacologic or surgical castration, (3) metastatic disease, and (4) more than six months of continuous enrollment before and after the first metastatic disease claim. The authors then explored the association between clinically significant events (CSEs) and mCRPC treatment. CSEs were assessed during the first line of therapy that was used for mCRPC. To assess rates of clinically significant events (CSEs) on therapy, time on treatment was used as the denominator to control for different durations of treatment.

The authors identified 3690 patients with mCRPC, 85% of whom received one or more lines of therapy. A total of 53% of patients received a regimen that is indicated for mCRPC, and 1677 patients were able to be categorized into four mutually exclusive groups based on regimen. These groups are shown below. The average follow-up time was 705 days. The rates of CSEs were then tabulated and are shown below. The average number of CSEs was two per patient, with the most common being fatigue, anemia, and back pain. As can be seen, by the blue and orange/red lines, chemotherapy-based regimens were associated with the highest rates of CSEs per year. These data are helpful for describing the treatment burden of various modalities and can be used to potentially inform treatment decisions.