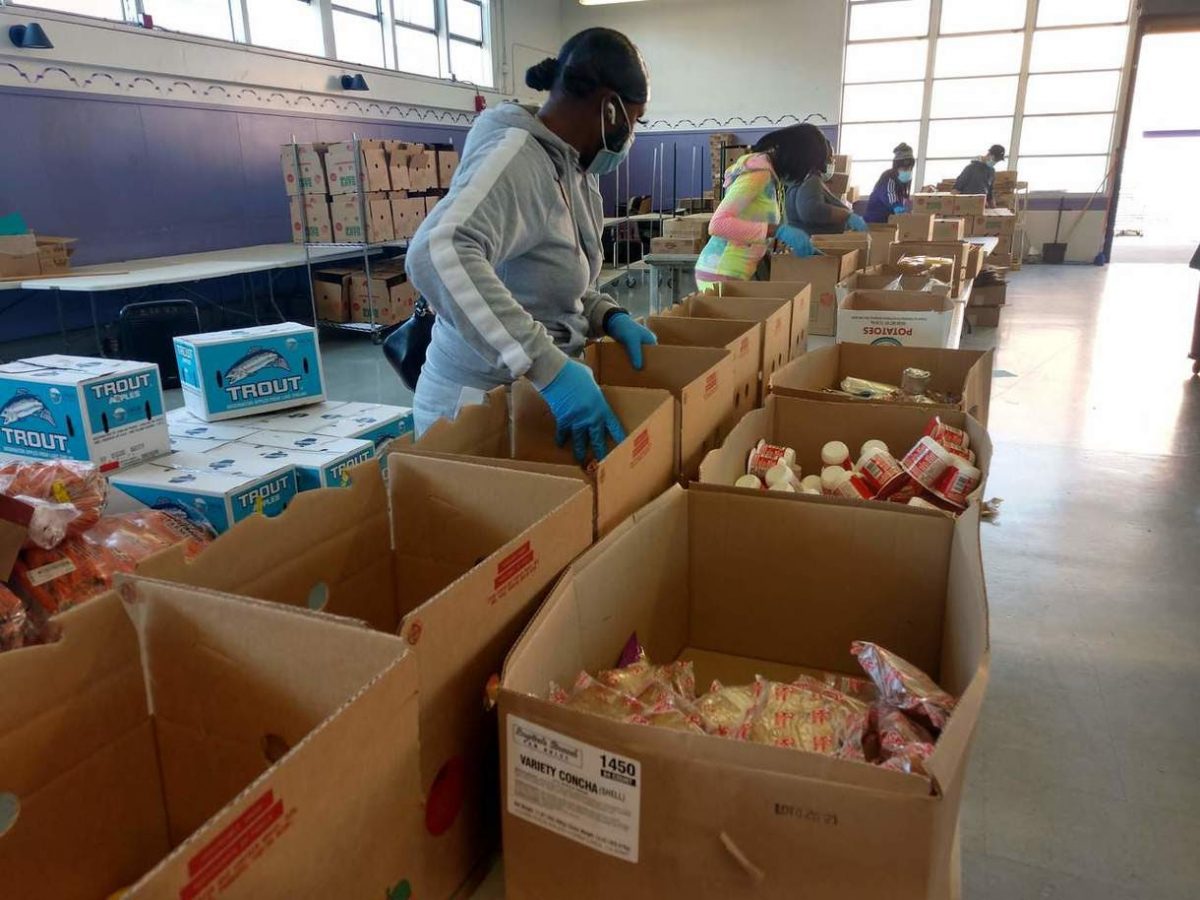 Oakland – For eleven months now, Oakland Unified School District (OUSD) has been ensuring our young people have access to nutritious food despite schools being closed to in-person learning. For most of that time, and for most students, that has meant visiting a school to pick up food. But now, the majority of students who receive food don’t even have to leave their homes. “If DoorDash and Uber Eats can take food to kids, then OUSD can do it, too,” said Irene Reynolds, Executive Director of OUSD’s Nutrition Services.

OUSD is now delivering student meals, plus produce boxes sponsored by Salesforce and adult meals from Revolution Foods, to family homes on a scale unmatched by any other school district. Five days a week, 120 District staff members put together food boxes which two dozen drivers deliver to homes across the city. That’s 12,000 food boxes delivered every week, plus produce boxes. “We’ve got to feed our kids, whether they’re at school or not,” said LaTanya Robinson (right) who works in Nutrition Services at Castlemont High School and Roosevelt Middle School. “We all gotta eat. I don’t like seeing nobody go hungry. Some kids don’t eat unless they go to school. This is a big blessing to a lot of people.”

The boxes normally contain a week’s worth of food, but on Friday, the boxes will contain two weeks worth because there’s no school next Friday. “We have taconadas, bean and cheese burritos, we have mini waffles, yogurt and celery, and we have apples and oranges thus far,” said Robinson.

On Mondays and Tuesdays, the hubs where the food boxes are assembled send the food to students in West and Central Oakland. Wednesday through Friday, the boxes are delivered across East Oakland. “With this home delivery, it just makes it easier and more convenient for our families, and that’s what they’re looking for,” said Peggy Gruendl, Nutrition Services staff member at Castlemont. “Our poor families are at home with their kids trying to get them on a zoom, and trying to get their schooling done. It just makes it easier to have it personally delivered to their home, instead of having to get interrupted and come pick up the food and go back home. Yeah, this home delivery is the way it should be.”

Throughout the pandemic, many OUSD families have struggled with loss of jobs and resources, and many remain out of work today. That’s why the District hired mostly parents of District students to be the delivery drivers. “My husband was laid off, so I’m the only one bringing income into our home,” said driver, Rosario Reyna (left), whose two children attend Greenleaf K-8 School. Not only is she working to support her family, Reyna says this is very important work, too. “I feel special because I am helping other families. And I feel like I’m doing a good job.”

The drivers deliver up to 150 food boxes per day. They also get to take food boxes home to ensure everyone in their families has enough to eat. “It says that we are willing to do whatever it takes to put kids first, and make sure they have every support available to get the most out of their education in whatever situation they are facing,” said Irene Reynolds from Nutrition Services. “We all know students need nutrition to thrive. In order to make sure we are supporting their learning, this thinking outside the box had to happen.”

3500 students still get their food through the grab and go food distribution sites spread across the District. For information about our food program, and to sign up for home delivery for your student, you can visit our website at www.ousd.org/covid-19studentmeals.

This post based on a press release from OUSD to Zennie62Media, Inc.