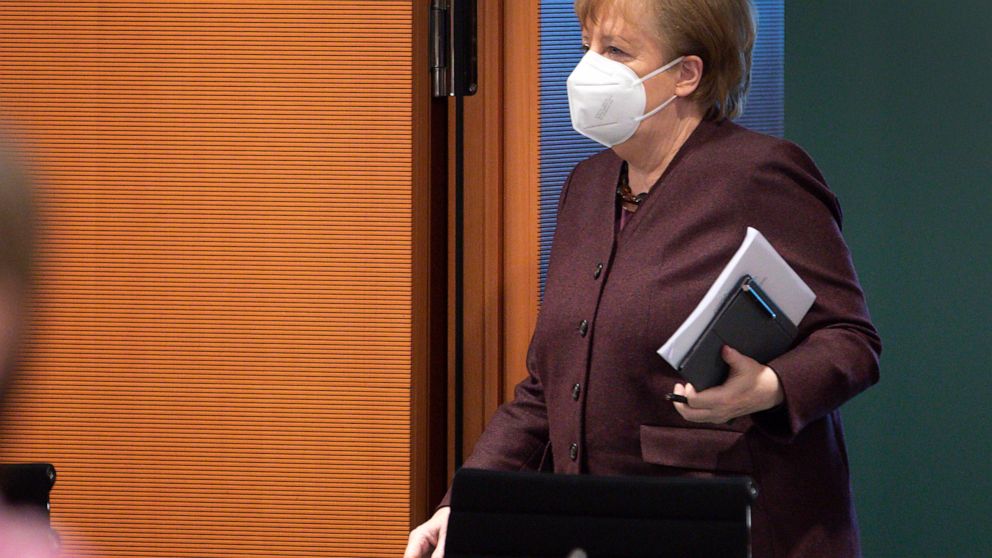 Brown said Wednesday that sports practices and games for outdoor contact sports can resume in counties deemed as “lower risk” and “moderate risk” for the pandemic.

For “high risk” and “extreme risk” counties, schools and other sports organizations can decide to resume outdoor contact sports but with additional health protocols in place.

The state Health Authority released data showing a “sharp decrease” in daily coronavirus infections and in hospitalizations and deaths related to COVID-19.

AP poll: Some US adults skeptical of vaccine, but 67% say they’ll take it. South Africa to offer 1-shot Johnson & Johnson vaccine. EXPLAINER: What the WHO coronavirus experts learned in Wuhan. Israel’s ultra-Orthodox reject criticism of their virus defiance, say they’re defending their way of life. What quarantine is like in Japan and what it might look like for the Tokyo Olympics.

IONIA, Mich. — A highly contagious variant of the coronavirus has been detected at the Bellamy Creek prison in western Michigan, and officials say they will begin testing inmates and staff there daily rather than weekly.

The Corrections Department said Wednesday that in addition to the change at the Ionia prison, daily testing will also be done for some people at the Duane Waters Health Center in Jackson and the Macomb Correctional Facility in Lenox.

Prison director Heidi Washington says that “we will continue to do everything we can to keep the prisoners, our staff and the community safe.”

JUNEAU, Alaska — Alaska is expanding eligibility for coronavirus vaccinations to include people 50 and older with high-risk medical conditions, pre-kindergarten through grade 12 teachers and childcare workers, and those 50 and older in essential jobs that require working in close proximity to others.

In late January, a state vaccine official had said officials did not expect new eligibility tiers to open in February, citing a focus on vaccinating people 65 and older. But Gov. Mike Dunleavy says in a Wednesday statement that many Alaskans in that age group who wanted to receive vaccinations have, “and now it’s time to open up vaccinations to a new group of Alaskans.”

NEW ORLEANS — New Orleans officials say hospitality industry workers who will lose income because of an upcoming bar shutdown and other coronavirus restrictions in the French Quarter can apply for five days of part-time work with the city.

Bars are being shut down throughout the city Friday, the beginning of what is usually a raucous Mardi Gras weekend. There also will be limits on car and pedestrian traffic in the French Quarter, where bars usually cater to shoulder-to-shoulder crowds.

In a $100,000 program, the city is offering up to 200 displaced workers jobs that officials say may include trash and litter pick-up and mask distribution. Workers selected can earn up to $100 a day for five hours of work a day Friday through Tuesday.

Beginning Thursday, visitors from anywhere outside the state will instead be advised to self-quarantine for a period of 14 days and to seek out a COVID-19 test upon their arrival in or return to New Mexico.

Officials announced the change Wednesday, citing what they describe as a brighter pandemic outlook despite January having been the deadliest month yet of the coronavirus outbreak in the U.S.

New Mexico has fared better in recent weeks as the rolling seven-day average of new confirmed coronavirus cases has been dropping. Deaths and hospitalizations also are down in the state.

CHICAGO — The Chicago Teachers Union has approved a deal with the nation’s third-largest school district to get students back to class during the coronavirus pandemic, union officials announced early Wednesday.

The vote ends the possibility of an immediate teacher lockout or strike. The agreement follows months of negotiations with Chicago Public Schools, which had intensified in recent weeks, with plans that included more teacher vaccinations and metrics to allow school closures when COVID-19 infections spike.

The union said 13,681 members voted to approve the agreement and 6,585 voted against it. Despite the approval, the union characterized it as the “absolute limit to which CPS was willing to go at the bargaining table to guarantee a minimum number of guardrails for any semblance of safety in schools.”

WASHINGTON — Federal authorities are investigating a massive counterfeit N95 mask operation in which fake 3M masks were sold in at least five states to hospitals, medical facilities and government agencies. The foreign-made knockoffs are becoming increasingly difficult to spot and could put health care workers at grave risk for the coronavirus.

Officials could not name the states or the company involved because of the active investigation.

Nearly a year into the pandemic, fraud remains a major problem as scammers seek to exploit hospitals and desperate and weary Americans. Federal investigators say they have seen an increase in phony websites purporting to sell vaccines as well as fake medicine produced overseas and scams involving personal protective equipment. The schemes deliver phony products, unlike fraud earlier in the pandemic that focused more on fleecing customers.

Reynolds said lower hospitalizations and other measures prompted her to lift the partial mask requirement and limits on crowd sizes. She says she’s entrusting Iowans to do the right thing.

Michael Osterholm, an epidemiologist at the University of Minnesota, says opening up now is giving the European virus variant a chance to spread quickly in the U.S.

TALLAHASSEE, Fla. — Florida Gov. Ron DeSantis again lashed out at the news media when he suggested Wednesday a bias in coverage of the pandemic, even as concerns swirl over more contagious strains of COVID-19 potentially spreading at gatherings celebrating the Tampa Bay Buccaneers’ victory in the Super Bowl.

“The media is worried about that, obviously,” DeSantis said during a news conference in Venice.

DeSantis has routinely asserted that there is a bias against conservatives and Republicans, particularly among reporters who have asked tough and sometimes uncomfortable questions about the governor’s handling of the public health crisis.

BERLIN — German Chancellor Angela Merkel and the country’s 16 governors are extending the country’s coronavirus lockdown until March 7 amid concern about new virus variants.

The agreement provides some exceptions, including allowing hairdressers to reopen on March 1, with hygiene regulations.

Germany’s second lockdown began in November and was extended and toughened before Christmas due to concern that the number of COVID-19 patients could overwhelm hospitals. It was to end on Sunday.

The weekly number of new infections has dropped to 68 per 100,000 inhabitants. The government’s goal is below 50 to help with reliable contact tracing. The number peaked at nearly 200 before Christmas.

LONDON — Prime Minister Boris Johnson says Britain’s coronavirus vaccination program is on course to give everyone over 50 the first of two shots by the end of April.

Johnson says 13 million people have had a shot so far, about a quarter of the adult population. Health authorities aim to reach the 15 million people at greatest risk from COVID-19, including frontline health workers and everyone over 70, by Feb. 15.

Johnson praised a World Health Organization recommendation that the AstraZeneca-Oxford University-vaccine can be used in adults of all ages, with a gap of eight to 12 weeks between doses. Some countries have declined to give the vaccine to older adults, citing a lack of data. Others have questioned the U.K.’s decision to leave a 12-week gap between doses to give as many people as possible the first shot.

MADRID — Spain’s official 14-day rate of coronavirus cases has fallen to 584, from a peak of 900 two weeks ago.

Health Minister Carolina Darias says, “We are on a downward trend and our data indicate that it will continue.”

The health ministry reported 643 deaths in the previous 24 hours, increasing the confirmed total to 63,700.

Spain has administered 2.23 million vaccines and nearly 890,000 of both doses.

THE HAGUE, Netherlands — The European Union’s medicines agency says it is developing guidance for drug companies planning to adapt COVID-19 vaccines to combat new variants of the coronavirus.

The European Medicines Agency says it has asked all vaccine makers “to investigate if their vaccine can offer protection against any new variants” such as those identified in the United Kingdom, South Africa and Brazil, and “submit relevant data.”

The EMA has so far authorized three vaccines for use in the 27-nation bloc, made by Pfizer, Moderna and AstraZeneca.

The agency says that there are concerns that some of the virus mutations “could impact to different degrees the ability of the vaccines to protect against infection and disease.”

ANKARA, Turkey — Turkey’s health minister says the country has reached an agreement to purchase another 50 million doses of the COVID-19 vaccine produced by China’s Sinovac company, bringing the total amount to 100 million doses.

Fahrettin Koca says the country is to receive at least 4.5 million doses developed by Pfizer by the end of March, with an option to purchase a further 30 million later.

Koca says an agreement has been reached to produce the Russian-developed vaccine Sputnik V in Turkey.

The country of 83.6 million people has received 15 million doses of the Sinovac vaccine, he says.

Turkey is poised to start administering the second dose of the Sinovac shot on Thursday. Some 2.8 million people have so far received their first doses.

NEW YORK — A new government study finds that wearing two masks can be better than one in protecting against coronavirus spread.

The Centers for Disease Control and Prevention on Wednesday reported the results of a lab experiment. The researchers found that particles were blocked twice as much when two masks were worn.

The CDC is updating its guidance to address wearing two masks. It says that a cloth mask worn over a surgical mask can tighten the gaps around the mask’s edges that can let virus particles in.

The researchers found that wearing one mask — surgical or cloth — blocked around 40% of the particles coming in during an experiment. When a cloth mask was worn on top of a surgical mask, about 80% were blocked.

Some Americans have already started doubling up. Experts believe that’s at least partly out of concern about new strains of coronavirus that possibly spread more easily. The U.S. has registered 2.7 million confirmed cases and more than 468,000 confirmed deaths, the highest numbers in the world.

PHOENIX — State officials say Arizona will expand a COVID-19 vaccination site on the University of Arizona campus in Tucson and convert it into a state site with higher capacity for administering shots.

It will be the third state site and the first in metro Tucson, where Pima County already has distribution points. State officials say the new state site will be a partnership between the state, the university and the county.

The transition to the state site will begin with appointments starting on Feb. 18. Arizona on Wednesday reported 1,997 more confirmed cases and 176 deaths.