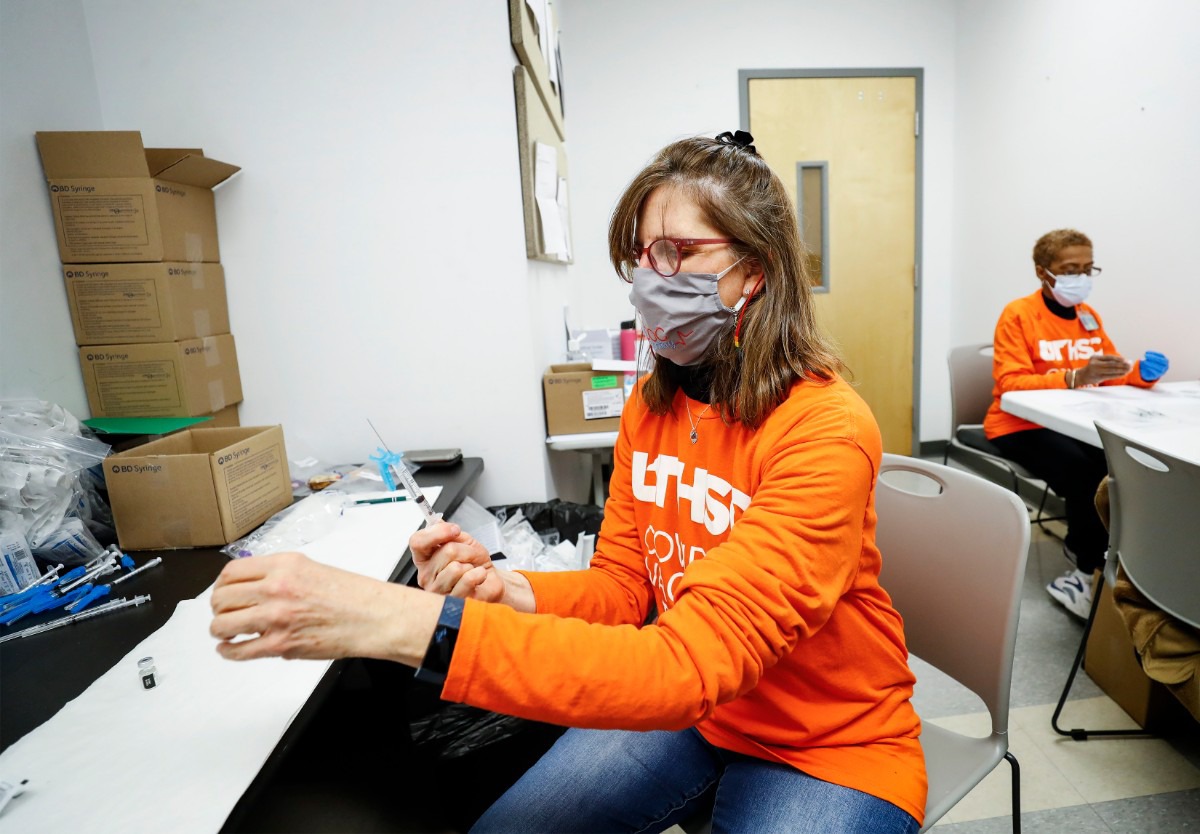 
Thousands of people are getting COVID vaccines each week in Shelby County because a groundswell of medical workers signed up to volunteer.

On blustery days, they work in a wind tunnel at the former Appling emissions station, 2355 Appling City Cove, in layers of clothes.

Dr. Amy Hertz, retired after 30 years on the frontlines in pediatric emergency medicine at Le Bonheur Children’s Hospital, has signed up to volunteer two shifts a week at the Appling station. She intends to volunteer the entire vaccination campaign.

“This is not sick people. I only know sick and trauma. … This is people coming in because they want to be there. Nobody is fussing about a shot,” she said. “You don’t have to hold anybody down; you don’t have to run after anybody.

“People are so happy to be there,” Hertz said.

“This is a way I can give back some of my time, some of my knowledge. I’m grateful to have this opportunity.”

Disparities glaring in vaccines given to 75 and older

Five shifts into her volunteer routine, it is still thrilling to get on the shuttle from the parking lot to the vaccination station, where she works a 5.5-hour shift. Wednesday, Feb. 3, she was vaccinating.

To sign up to volunteer at Appling, go here.

Friday, she was working in prep, pulling saline into the syringe.

“To me, no one is more important than anyone else in this vaccine delivery process,” Hertz said. “We all need each other. If one part doesn’t work, the entire system slows down.”

In late January, volunteers at the Pipkin Building were administering shots to people who had waited hours in line, some elderly, sitting in soaked diapers.

Volunteer Liz Dayton, a registered nurse and associate director of clinical services at Meritan, gave a shot to a 93-year-old in that condition on Jan. 23, 2021, at Pipkin.

“I just said to myself, what resources can I come up with, and how can we implement them to get this wait down?”

Kinks remain at Pipkin but road getting smoother

And because Dayton was also in charge of scheduling volunteers there for the next two weeks, she recruited students from the Loewenberg College of Nursing at the University of Memphis to hand out vaccine paperwork and answer questions so that when people arrived at the shot station, it was “shot, go,” she said.

“The students haven’t had an opportunity to have in-person clinicals. They had a class on the forms the day before, and they were out there interacting with the seniors. They prepped the people, made sure the forms were filled out correctly and that sleeves were rolled up,” Dayton said.

Meritan provides in-home nursing care. After years in the work, Dayton knows many people have difficulty concentrating when they are in stressful situations like slow-moving lines, haven’t eaten in hours and were anxious before they even got in line.

“The Pipkin is a long building, and with all those cones directing people where to drive, seniors can get easily confused. They will just stop,” she said.

Dayton added more people inside to wave drivers through.

“That little thing really speeded it up,” she said.

Dayton recruited 40 volunteers a day for Pipkin, and found it remarkably easy, she said, because many people who had signed up with the state Medical Reserve Corps were not contacted.

“I had so many volunteers by the end of first week, I had to say I was full,” she said.

To volunteer at the Pipkin, go here.

Vaccination advances with second doses at Pipkin, first doses continue at other locations

Pediatrician Chris Hanson signed up to volunteer with the Medical Reserve Corps and was later contacted by the Health Department.

Thursday, his first at Pipkin, was the best thing that had happened to him all week, he said.

“It’s a good reminder that we all have different jobs and different backgrounds, ethnicities and needs, but we’re all more alike as humans than we are different.”

Frayser could get permanent COVID vaccine site later this month

Hanson was assigned to a team with two nurses and two paramedics who worked their six-hour-plus shift in an easy, democratic camaraderie.

“It’s nice seeing the community come together to do something good and positive in a year when there has been so much division, anger, hatred and all those things,” Hanson said. “Maybe it’s a little bit of personal protest against all of that to try to do something good.”

Hanson can’t count the people who looked him in the eye and thanked him for his time and his care.

But there have been issues for volunteers. Social media posts last week said medical volunteers walked off the job Tuesday, Feb. 2, at Pipkin due to “poor treatment.”

Sources who didn’t see people walking out firsthand say they can believe it happened because they had noticed Health Department pod leaders could be gruff with volunteers.

Health Department Director Alisa Haushalter said she did not have “specific reports” that people left due to their treatment.

“What I do encourage volunteers to do, though, is give feedback on their experience,” she said.

“This really is a fairly fast-moving train, and it changes regularly, so it’s important that we focus on quality improvement every day at every site,” Haushalter said.

Volunteers were also originally told they would get vaccinated at the end of their shift. That has changed since the county introduced VaxQueue, an app that lets people sign up to receive doses on short notice if there are extras.

Dayton doubts it will affect the number of doctors, nurses, dentists and EMTs who sign up to volunteer, but expects it could deter dozens of nonmedical volunteers, especially those who work outside

Anything that slows the process down now is dire, she said.

“The worst thing we can do is administer the vaccines slowly,” she said. “You do that and you allow the virus to mutate around your vaccine. That creates a super virus.”

Citizens who have received shots, even after long waits, have talked about the triumph they felt for science and medicine.

Prudence Howe got her second dose at Pipkin last week, after seeing long lines on the news and dreading what the process might be.

“The man who gave me my shot was lovely. He definitely warned me that a lot of people don’t feel good after the second shot.

She arrived shortly after 8 a.m. for a 9 a.m. appointment.

“I think I was the seventh car in line. It was easy peasy.”

Hertz is touched by the emotion people feel about the vaccine, from those so thrilled to have it, they drive off clapping and laughing, to those suddenly so overcome with emotion, they end up apologizing to a complete stranger for their tears.

“It’s also lovely seeing adult children bringing in their elderly parents to have their shots,” Hertz said. “They are the ones that probably stayed on the computer trying to figure out how to sign up.”

After his shift Thursday, Hanson noticed that even during the clean-up time, “You don’t see people looking like the end of a workday. People don’t look tired and exhausted, like ‘I can’t wait to get home,’” he said.