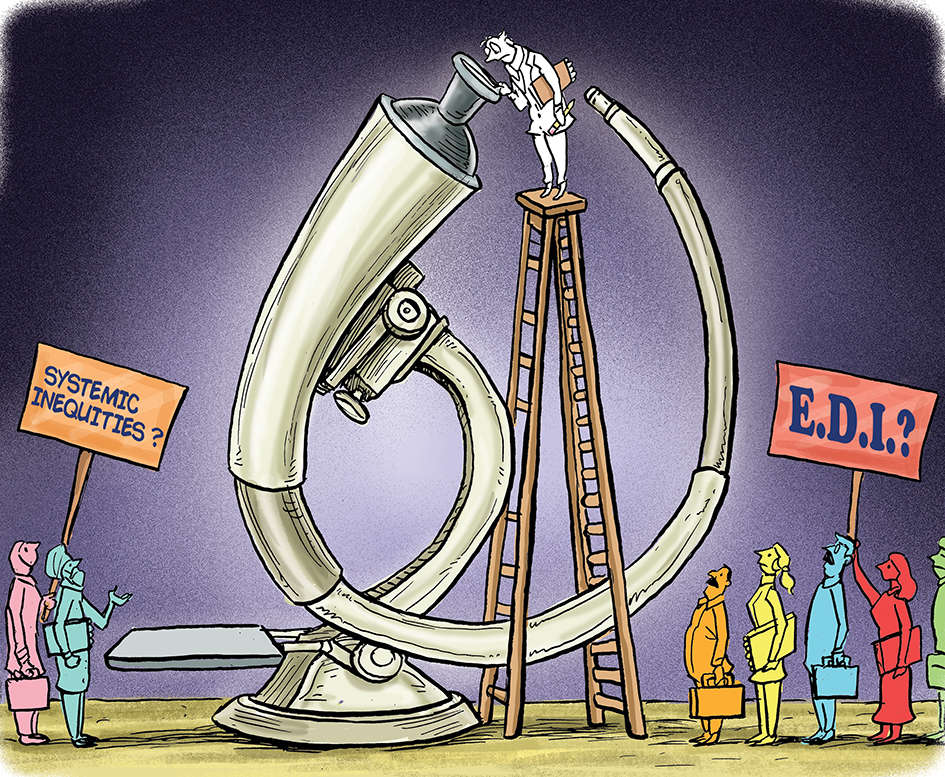 
Last year the world witnessed many protests against systemic discrimination against underprivileged and minority groups. Such discrimination is very pervasive, including in education and science. There is now a loud and renewed call and discussion for equity, diversity and inclusion (EDI) in these domains. The pandemic has increased disparities. Diversity among students, teachers and research participants has reduced because of restrictions on travel, accommodation, healthcare, access and fellowships.

Recent discussions on EDI have resulted in highlighting that lack of diversity and inclusivity has resulted in huge constraints on scientific inference and application. I will provide the example from biomedical genetics. Successes of genetic research have raised a lot of hope for diagnosis and treatment of diseases. For a doctor to use genetic information of a patient to decide about the specific drug to prescribe has now become a reality, especially for various types of cancer.

The creation of knowledge that enables such applications requires research to determine how the genetic makeup of a patient associates with a specific disease or how it associates with response to a specific treatment for a disease. This research involves selecting a large number of patients suffering from a disease and normal individuals, identifying their complete genetic characteristics and carrying out statistical analyses of association to identify whether a genetic characteristic is in higher frequency among patients. A person who has this genetic characteristic is at a higher risk to manifest the disease.

Selection of persons is at the heart of all such association studies. This is where we have failed. Past selection lacks diversity. It was found in 2009 that 95% of the hundreds of genome-wide association studies conducted involved only people of European descent. The situation improved a little in 2016; from 95% to 81%. There continues to be a huge deficit of representation of global ethnic and geographic diversity in these studies.  Yet we want the conclusions of our research to be widely applicable. The lack of diversity in genomic research can result in erroneous understanding of the relationships between genes and disease in unstudied populations.

For example, the CYP2D6 gene is involved in the metabolism of many commonly prescribed drugs, including tamoxifen, which is used to treat breast cancer. More than 100 different variants of this gene – many of which affect an individual’s ability to safely digest and use a drug – occur at differing frequencies across populations. Unless research is inclusive of the diversity of peoples, the results of research are likely to be of limited value, probably wasteful and harmful.

The process of translating genetic information into tests for diagnostic, prognostic, therapeutic and disease-monitoring purposes is based on scientific evidence. Personalising health by tailoring treatments and predicting disease risk critically hinges on understanding individual genetic variation related to disease, behavioural and environmental factors. If scientists, governments and health systems want to better serve their communities, genetic studies must include a far better representation of people with diverse genetic backgrounds, including marginalised and hard to reach groups. Failure to do this will lead to greater non-applicability of results of scientific inquiries that are mostly publicly-funded and also higher inequities in healthcare.

The government of India has initiated some major population-level research projects on genomics. Biobanks – repositories of blood samples, cancer tissues etc – are being created for use in genetic and other research to understand diseases of importance in India. Inclusion of diverse ethnic populations is of paramount importance in genomic research and in biobanks.

A culture shift is required at every level. To successfully recruit participants for biomedical research in an ethnic group, it is ideal that such research be conducted by investigators of concordant ethnic background, and in partnership with institutions trusted by those groups. Funding agencies should provide incentives to create ethnically diverse cohorts of study participants and biobanks. One effective way would be to prioritise funding requests that propose investigations in a set of ethnically diverse populations.

In the context of a major international project, we identified some key principles to promote EDI (Majumder, Mhlanga, Shalek in Nature Medicine, October issue, 2020; https://doi.org/10.1038/s41591-020-1100-4). These are, first, that partnership is at the core of equity. Partnerships are built on mutual trust.  Trust can be earned if the fruits of research are beneficial to the people.  Therefore, research must be designed for the people.

Second, for research to be beneficial to people, scientists must know their local needs and aspirations. Therefore, they must ask questions and listen carefully. Finally, it is often assumed that there is adequate knowledge of concepts and technologies to embark on a specific scientific research, but this is usually not the case. Information, approaches and technologies are usually derived and controlled by well-funded laboratories in high-income countries. Inequity can be driven by lack of knowledge and lack of access to infrastructure. Scientists must identify, articulate and track how equitable partnerships, on multiple levels, lead to long-term empowerment, mutual benefit and equal participation.

Creating a scientific culture that actively dissolves systemic inequities and enhances equity, diversity and inclusion has the boundless potential to transform society. The time to act is now.

Views expressed above are the author’s own.