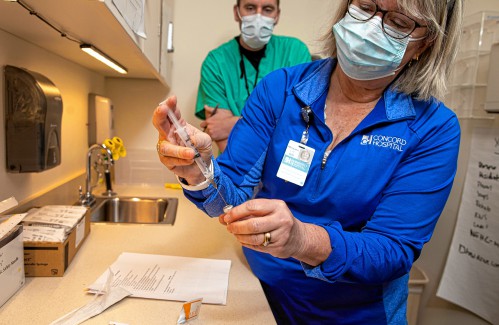 
In early January, some health care providers reported that a third of their staff were opting out of the COVID-19 vaccine, a number concerning to some health officials, especially as new, more contagious mutations of the virus spread around the United States.

U.S health officials have warned that as the virus becomes more contagious, 70% to 90% of the population might need to be vaccinated in order to achieve herd immunity.

Now, employers in the health care industry say that number is improving. With education and patience, many of the fears and concerns about the COVID-19 vaccine have been allayed.

David Ross, an administrator at Hillsborough County Nursing Home said 60% of the facility’s staff have now been vaccinated. Last week, during the home’s second vaccine clinic, nearly 40 staff who had previously declined the shot decided to start the vaccine series. Even more staff members have already asked about starting the vaccine series during the third clinic in mid-February.

“We were thrilled,” Ross said. “For many of our staff, the risk of COVID itself has greatly outweighed any vaccine hesitancy.”

Ross said the home has encouraged staff to research the vaccine using trusted sites rather than social media, and to talk with their health professionals directly as they made their decisions about vaccination.

Primarily, watching their co-workers get the vaccine has been reassuring, he said.

Greg White, CEO of Lamprey Health Care, said about 20% of his staff have said they don’t want the shot and about 9% are choosing to wait until more people are vaccinated to decide if they want the shot.

He said both of those statistics are vast improvements from a couple of weeks ago. White credits the shift in attitude to a number of education programs the practice started that taught staff how the vaccine works and addressed concerns.

Ken Gordon, CEO of Coos County Family Health Services, said his practice started about 75% vaccination. Now, nearly 85% of his staff have been vaccinated.

“When people went through the first shots and saw that people were surviving, a number of other folks came on board,” he said.

According to a December poll from the University of New Hampshire, 61% of Granite Staters will almost certainly or probably get the vaccine when it becomes available to them. This poll was more optimistic than previous polls from UNH, which found only 40% planned on receiving the vaccine, but still left a sizable portion of the state’s population who would probably not or certainly not get vaccinated.

Yet hallenges remain in convincing health care workers to get vaccinated.

Kris McCracken, the president and CEO Amoskeag Health, said there is hesitancy, especially among groups that have historically been harmed by dangerous experiments and racist health policies.

“Out of the people who declined, it was highly concentrated in our populations of color,” she said. “We’ve been doing a lot of education internally and talking about racism and lack of trust and how communities have been experimented on the history.”

Michael McLeod, associate chief clinical officer at Concord Hospital, said his facility’s numbers have hovered around 70% for the last couple weeks. Despite a weekly informational call and newsletter about the vaccine, concerns about the long-term effects of the vaccine have persisted.

As long as the vaccines are authorized by the FDA for emergency use, a classification that requires less evidence than is typically required for full approval, Concord Hospital will not make it mandatory for staff, McLeod said. If they are fully approved later on, McLeod said there is likely a path for mandatory vaccination.