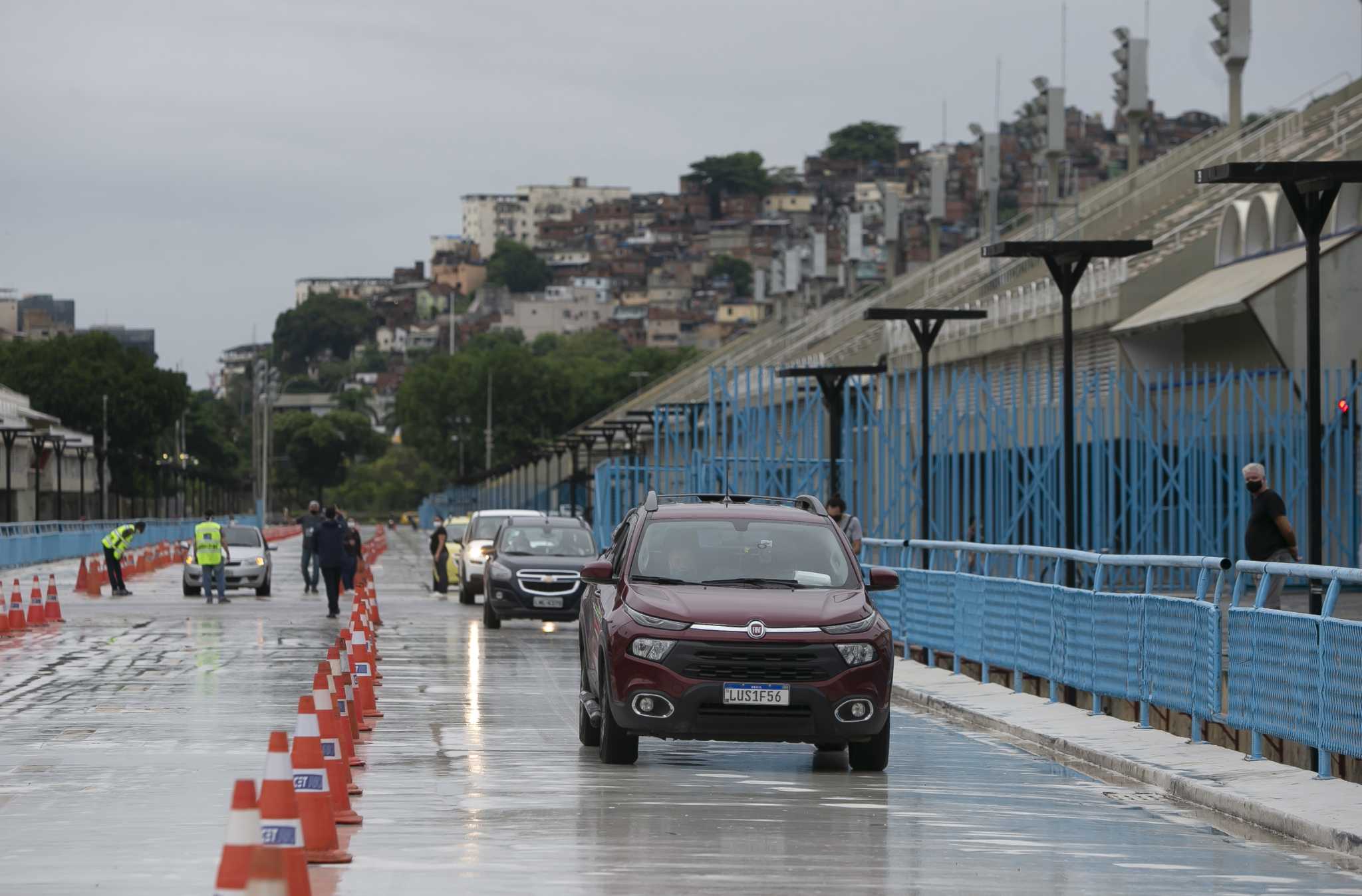 RIO DE JANEIRO — Normally, Rio de Janeiro’s Sambadrome would be preparing for its greatest time of the year: The world’s most famous Carnival parade.

But a week before the start, the coronavirus pandemic has replaced the pageantry. The celebration is on hold until next year as Rio struggles with a rise in coronavirus cases. The city on Saturday opened a drive-thru immunization station at the Sambadrome, where a line of cars queued up on a broad avenue built for floats.

“This is usually a place of pleasure. Today it is too, because we are exercising an act of citizenship and we are opening the Sambadrome to vaccinate, ” said Paulo Roberto Machado, a 68-year-old nurse who teaches at the Veiga de Almeida University.

Machado has taken part in 40 years of Carnival parades here. But on Saturday, he was coordinating 20 volunteer nursing and medical students to vaccinate people over age 90.

Rio has recorded more than 17,600 confirmed deaths — the most of any city in Brazil, even topping Sao Paulo, which has nearly twice the population.

OKLAHOMA CITY — The number of reported coronavirus cases in Oklahoma has surpassed 400,000.

Data from Johns Hopkins University shows Oklahoma was fourth in the nation in the number of new cases per capita, with 855 cases per 100,000 residents. The data shows the seven-day rolling average of deaths in the state fell during the past two weeks from 37 to 34 deaths per day.

More than a half million Oklahoma residents have received the coronavirus vaccine, including 114,208 who have received both doses, according to the federal Centers for Disease Control.

WASHINGTON — The nation’s top health officials are sounding the alarm about Super Bowl gatherings as a potential coronavirus superspreader event.

They’re urging people to gather with friends over Zoom, not in crowds or at bars and parties. The Tampa Bay Buccaneers and Kansas City Chiefs will play Sunday in a partly filled stadium in Tampa, Florida. The city has acquired 150,000 donated masks that officials will be handing out.

The game is happening during a drop in new coronavirus cases — a sign the infection spike from December holiday gatherings may be easing. However, health officials are concerned Super Bowl parties with people outside their household could spread new cases.

“We’ve seen outbreaks already from football parties,” said Rochelle Walensky, head of the Centers for Disease Control and Prevention. “So, I really do think that we need to watch this and be careful.”

The seven-day rolling average for daily new cases decreased from 180,489 on Jan. 22 to 125,854 on Friday, according to data from Johns Hopkins University.

However, the coronavirus is killing more than 3,000 Americans a day. The nation’s confirmed total death toll is 460,000.

Health officials are urging football fans to forego Super Bowl gatherings with members outside of their own households.

Arizona has registered decreases in cases, hospitalizations and deaths since the December holiday surge. However, public health officials have warned against complacency and urged caution on Super Bowl weekend.

WASHINGTON — President Joe Biden vows to get younger students back to the classroom by spring, and some health experts look forward to the U.S. refocusing coronavirus tests to rapid home screenings.

Biden is using the Defense Production Act to scale up supplies needed for rapid tests. On Friday, the White House announced six manufacturers will mass produce the tests, with the goal of providing 60 million by the end of the summer.

Some experts say rapid home tests are cheaper, faster and may improve the chances of identifying sick people during the early days of infection, when they are most contagious.

Dr. Michael Mina, a Harvard University testing specialist, calls the rapid tests a “public health screening test.” An estimated 40% of people infected don’t develop symptoms. Mina says rapid tests have the clear advantage over the predominant genetic lab tests, which are more accurate but can take several days for results and allow for silent spreading of the virus.

Some universities and school systems have used rapid tests to help stay open during the pandemic.

The coronavirus is killing more than 3,000 Americans per day. The nation’s confirmed death toll is 460,000.

WUHAN, China — The message was tucked into a bouquet of chrysanthemums left by a mourner at the back of Wuhan Central Hospital to honor a Chinese whistleblower doctor who died from the coronavirus a year ago.

It was simply the number of a Bible verse: “Blessed are those who are persecuted because of righteousness, for theirs is the kingdom of heaven.”

A year ago, Dr. Li Wenliang died from the virus first detected in this Chinese city. A small stream of people marked the anniversary at the hospital. The 34-year-old became a beloved figure in China after it was revealed that he was one the whistleblowers who authorities had punished early for “spreading rumors” about the virus in a social media group.

The Chinese public embraced Li, whose presence online had painted a picture of an ordinary person who was soon to be a father.

China has reported more than 100,300 confirmed coronavirus cases and 4,822 deaths, according to a tally by Johns Hopkins University.

PARIS — French health facilities received their first batches of AstraZeneca vaccines on Saturday, with the first shots delivered at a Lyon hospital.

The batch for 117 facilities was small, 273,600 doses, and all reserved for health professionals under 65 years old. France is currently restricting the vaccine to those ages 50 to 64, despite guidance from the European Medicines Agency that it could be used for all adults.

It gives France a third vaccine and helps bolster a promise by President Emmanuel Macron that all French who wish will be vaccinated by summer’s end.

France gets a second batch of 304,800 doses next week. So far, about 1.8 million people had been vaccinated. The nation is still under a 12-hour curfew starting at 6 p.m., with restaurants and cultural venues closed for months and a full border closure with countries outside the EU.

WASHINGTON — The executions at the end of Donald Trump’s presidency likely acted as a superspreader event.

That’s according to records reviewed by The Associated Press. It was something health experts had warned could happen when the Justice Department insisted on resuming executions during a pandemic.

Of the 47 people on death row, 33 tested positive for the coronavirus between Dec. 16-20. Guards were ill. Traveling prisons staff on the execution team caught the virus. So did media witnesses, who may have unknowingly infected others when they returned home because they were never told about the spreading cases.

Records obtained by The Associated Press show employees at the Indiana prison complex where the 13 executions were carried out over six months had contact with inmates and other people infected with the coronavirus. However, they refused testing, declined to participate in contact tracing and were still permitted to return to their work assignments.

The Bureau of Prisons has repeatedly refused to say how many people tested positive for the coronavirus after the last three federal executions last month.

NEW DELHI — Some poorer countries are getting tired of waiting to get vaccines through a United Nations program, so they are striking out on their own.

Countries including Honduras, Serbia and Mexico have cut their own private deals. Experts are increasingly concerned that these go-it-alone efforts could undermine a United Nations-backed program to get COVID-19 shots to the neediest people worldwide.

In past disease outbreaks, less wealthy countries generally waited for vaccines to be delivered by the U.N. and others. Many are now taking matters into their own hands. Those deals could leave fewer vaccines for the program known as COVAX.

However, COVAX’s stated goal is to vaccinate less than 30% of people in poor countries, meaning that governments must seek other sources to obtain enough shots to achieve herd immunity.

TAIPEI, Taiwan — China has given broader approval for the domestic-made Sinovac coronavirus vaccine.

The decision on the Sinovac vaccine was announced Saturday. It expands who can receive the vaccine beyond the high-risk and priority groups already allowed under an emergency clearance.

In China, the shot was given emergency approval last July, allowing groups such as medical workers and employees of state-owned firms to receive it. The conditional approval means the vaccine now can be given to the general public.

It is the second locally made vaccine to be given conditional approval. Beijing authorized the state-owned Sinopharm vaccine in December.

Santa Clara County and the San Francisco 49ers will open the state’s largest vaccination site next week at Levi’s Stadium. It can handle up to 15,000 shots a day.

The Pentagon announced troops will start arriving in a little over a week to run a new site that opens Feb. 16 at California State University, Los Angeles. Other federal employees will head to a second 6,000-shots-a-day site at Oakland-Alameda Coliseum.

Los Angeles County says it will limit new vaccinations to ensure people can get their second doses. The state is reporting about 14,500 new cases daily, down by nearly half from two weeks ago.

Kaiser Permanente opened two mass vaccination centers under an agreement with the state, one at Moscone Center in San Francisco and the other at Cal Poly Pomona. Each has the capacity to administer up to 10,000 doses a day.

COLOMBO, Sri Lanka — Sri Lankan health officials say more than half of the health workers and frontline military and police officers have been vaccinated against COVID-19.

The ministry had planned to first vaccinate 150,000 health workers and selected 115,000 military and police personnel.

By Saturday, 156,310 had been given with COVISHIELD vaccine. India had donated 500,000 does of the AstraZeneca vaccine, also known as COVISHIELD, which is the only vaccine approved by the regulatory body in Sri Lanka.

Health ministry says Sri Lanka has ordered 18 millions doses the vaccine and had asked to allocate 2 million doses from Pfizer. Also, China has promised to provide 300,000 shots of Sinopharm vaccine this month.

Sri Lanka has had a fresh outbreak of the disease since October, when two clusters — one centered on a garment factory and other on the fish market — emerged in the capital Colombo and its suburbs.

HONOLULU — Hawaii officials are urging the public to avoid Super Bowl parties this weekend while announcing that a possibly more transmissible variant of COVID-19 has been detected on Oahu.

One individual with no travel history has been confirmed to have the variant that first emerged in England. One close contact of this person also tested positive for COVID-19. The same variant has already been detected in more than 30 U.S. states.

Hawaii’s governor says the way to avoid spreading the coronavirus remains the same: wear a mask, keep your distance, stay home when sick and wash your hands.

Reynolds issued a proclamation that removes a mask requirement for those spending 15 minutes or more in an indoor area within 6 feet of people not in their household. She also ended mask requirements for those in state buildings and some businesses, such as barber shops.

The governor’s new order, which takes effect Sunday, also ends limits on the number of customers in a business or a requirement they stay socially distant.

Reynolds issued the earlier restrictions in November when hospitals were struggling to care for a surge of coronavirus patients. Those numbers have dropped, though the state typically reports dozens of deaths each day.

On Friday, the state reported another 34 deaths, bringing the total to 5,067 confirmed deaths from the virus.