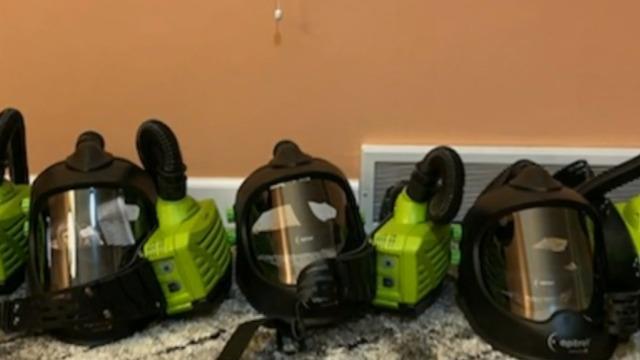 
Almost a year into the coronavirus pandemic, some frontline health care workers are still experiencing shortages of personal protective equipment, known as PPE.

Dr. Ann Victory worked at MidMichigan Medical Center – Alpena, the only hospital in Alpena, Michigan, which sits on Lake Huron’s shores and has a population of just under 10,000 people.

“At night, it was just me and the ER doc. And anything that happened in the hospital I had to take care of. And I really liked that challenge,” Victory told CBS News’ Anna Werner.

In April, her hospital’s president was asked about preparations for the coming pandemic. He told a local TV station that the hospital had enough supplies to manage an influx of patients. But that’s not what Victory said her review as part of the hospital’s medical executive committee found.

“What I saw when I actually went to the medical floors was that we weren’t using the right precautions. The staff wasn’t safe. And therefore, the patients weren’t safe,” she said.

In mid-November, Victory says the crisis she was worrying about hit, and the hospital was soon filled with patients.

“The ICU was full. The medical floors were full, and the COVID-19 unit was full of COVID-19 patients,” she said.

A non-profit group called “Get Us PPE” reported that requests from health care workers seeking help to get the equipment rose 260% between November and December. Victory said at her hospital, nurses were being told to reuse critical N-95 masks.

“By the time the hospital decided the mask was worn out, it had been worn way more than was recommended, and it wasn’t working,” she said.

Another hospital worker, who asked for their identity to remain concealed out of fear of getting fired, told CBS News that hospital workers were using the same masks over and over again, and staff members were afraid to ask for new masks.

“You don’t ask for a new one because you don’t want to get in trouble. People were getting sick more and more,” the employee said.

Victory said that the hospital wasn’t testing the staff, and workers were coming down with COVID-19 and were afraid to go back and take care of more COVID-19 patients.

Around Thanksgiving, Victory became so concerned she said she decided to use her own money to purchase seven government-approved respirators called PAPRs. Keeping one for herself, she gave the others to the nurses.

“So I took all of the money that I had, I spent about $7,000 and bought seven PAPRs, and I took them into the hospital with all the documentation, and the hospital told us not to use them,” she said.

Instead, Victory said, the managers then took respirators away and locked them up — away from people who wanted them.

CBS News reached out to MidMichigan Health, and they declined a request for an interview. In a statement, MidMichigan Health wrote, “The safety of all [our] front line workers, employees, volunteers, and patients have been and will always remain a top priority.” The hospital said they have “followed personal protective equipment standards.”

Dr. Shikha Gupta, head of “Get Us PPE,” said a survey of frontline workers found that nearly 90 % said they are repeatedly reusing masks recommended to be one-time use only.

“Get Us PPE,” said there are still many challenges in the PPE supply chain for healthcare workers nationwide with some PPE, like masks and gloves, in especially short supply.

A staff member from a hospital in Ohio, who asked not to be identified out of fear of losing her job, detailed her feelings about the lack of PPE.

“The most frustrating thing to me is knowing that my safety is being compromised every day. It’s incredibly frustrating,” she said.

On December 3, Victory said she turned in her badge and quit her job.

Mid-Michigan Health told CBS News it is “in compliance with mandates issued by the Michigan Occupational Safety and Health Administration (MIOSHA) and Michigan Department of Health and Human Services (MDHHS), as well as the recommendations by the CDC.”

Victory now works at a different hospital in another state, where she’s once again working 12-hour days caring for COVID-19 patients.