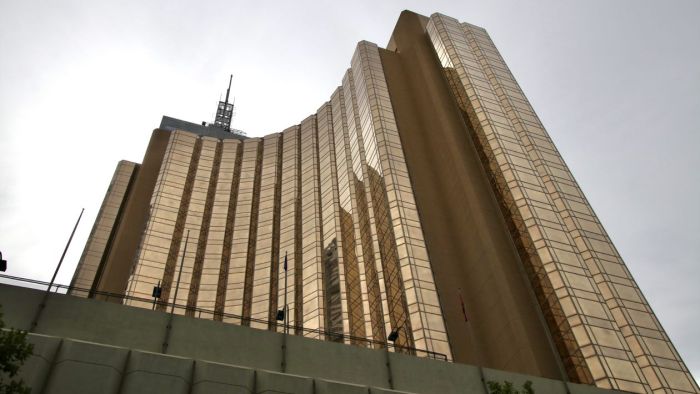 A 26-year-old Noble Park man who worked as a residential support officer at the Grand Hyatt hotel returned a positive test on Wednesday, prompting a snap tightening of restrictions.

Chief Health Officer Brett Sutton said a laboratory had identified the worker as having the B117 variant of COVID-19, which is “the more transmissible variant of concern”.

Professor Sutton said work was still being done to determine which of the six positive cases at the Grand Hyatt was the source of the infection.

The six cases were all people who arrived in Melbourne from Qatar, where they were involved in the qualifying tournament for the Australian Open.

“Where exactly it’s come from is still to be determined, we do need to marry up that genomics information with the epidemiological information, so the CCTV footage, the interviews, to really understand how transmission might have occurred,” Professor Sutton said.

“We’re confident at the moment it’s not been picked up in the community but from one of the residents in the hotel.”

LIVE UPDATES: Read our blog for the latest news on the COVID-19 pandemic.

The worker has been praised by Victorian officials for being a “model” employee who did not breach any infection control protocols and provided a detailed list of his whereabouts.

The possibility of aerosol spread within the hotel system is also being looked at and the ventilation is is being reviewed.

“Droplet spread is managed when you’re more than a metre and a half away and you’re wearing PPE, but airborne spread, aerosolised particles can move even further than that,” Professor Sutton said.

“We just need to be as precautionary as we possibly can, we’ll re-examine that.”

‘More transmissible than your standard coronavirus’

From more than 20,000 test results processed from midnight on Wednesday night to a 9:30 press conference on Friday morning, there were only three cases confirmed in returned travellers in hotel quarantine.

Sixteen of the Noble Park man’s close contacts have returned negative tests, which Premier Daniel Andrews said was “exactly the outcome that we were after”.

We offer tailored front pages for local audiences in each state and territory. Find out how to opt in for more Victorian news.

The B117 variant is thought to be at least 50 per cent more transmissible than previous strains.

Professor Sutton said he was “a little bit surprised” there had not been any new confirmed positives, given the hotel worker had the UK strain.

“That’s why I want to emphasise that they can still test positive in this incubation period. It is a highly transmissible virus, more transmissible than your standard coronavirus,” he said.

The man’s contacts, including anyone who visited a list of exposure sites during the specified times, have been instructed to isolate for 14 days and will be tested again next week.

Health authorities are working with 743 of the man’s workplace contacts. A further 506 people associated with the Australian Open have been tested and will be released from isolation as their negative results come through.